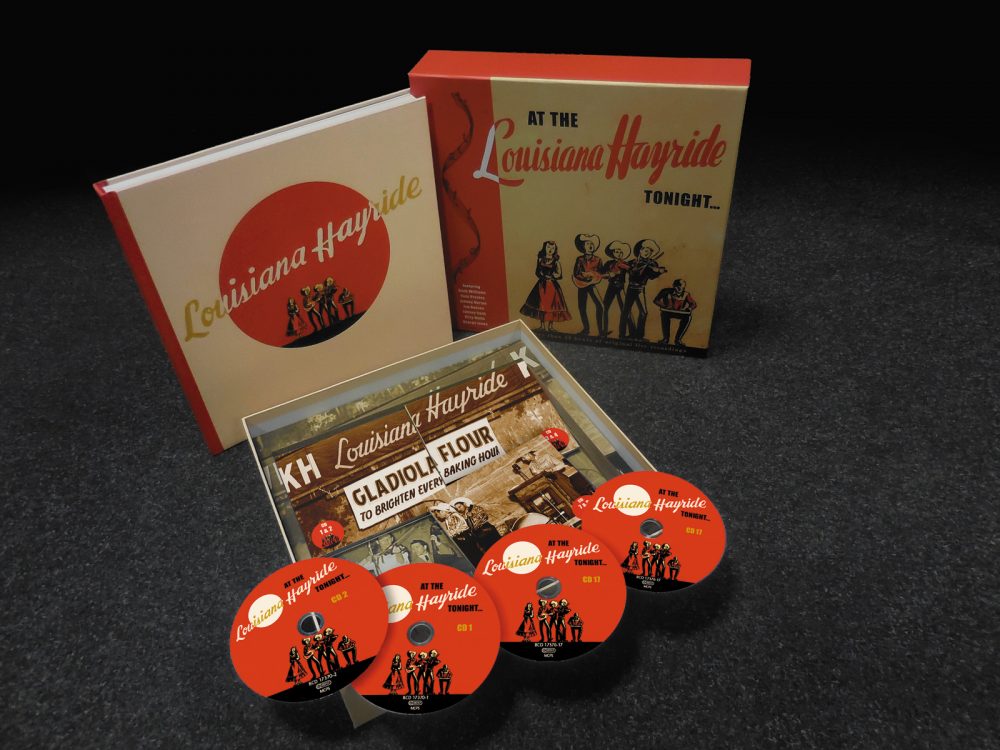 Bear Family’s latest box-set is their biggest ever, weighing in at 9.5 pounds and consisting of 20 compact discs and a 224-page hardback book. It’s the size of 20 LPs stacked on top of one another, clocking in at an astonishing 25+ hours of audio. At the Louisiana Hayride Tonight is an astonishing historical record of the country music program’s 12-year run (and then some), broadcasted on Shreveport’s KWKH-AM.

The Louisiana Hayride was a radio program akin to Nashville’s Grand Ole Opry or Los Angeles’ Town Hall Party, in that it presented popular country musicians of the day on the airwaves. However, the Hayride was notable in its presentation of early rock ‘n’ roll acts, as well as the fact that the show wasn’t just one headliner and a bunch of undercard performers. The program would have even the hottest acts only perform a few songs, placing them in direct competition with the local and regional musicians, giving everyone an equal shot at the audience’s attention.

Where does one even begin with such an immense compendium? For me, I put on the set’s first disc, and began to dig into the massive volume which accounts for the set’s heft. The introductory text, by Martin Hawkins, and “An Overview,” by Colin Escott, traces the show’s inception and history as a whole, as well as providing some asides from Margaret Lewis Warwick and Arthur Alton Warwick — those who now own the rights to all this music — as to why they’ve chosen to make it available.

Escott’s overview attempts to clear up rumors and legends, trafficking in facts, historical record, and contemporaneous accounts to clear up much of the hoopla surrounding the Louisiana Hayride’s history — such as debunking much of the self-aggrandizing myth-making done by the show’s longtime host, Horace Logan, in his 1998 book, Elvis, Hank, and Me. 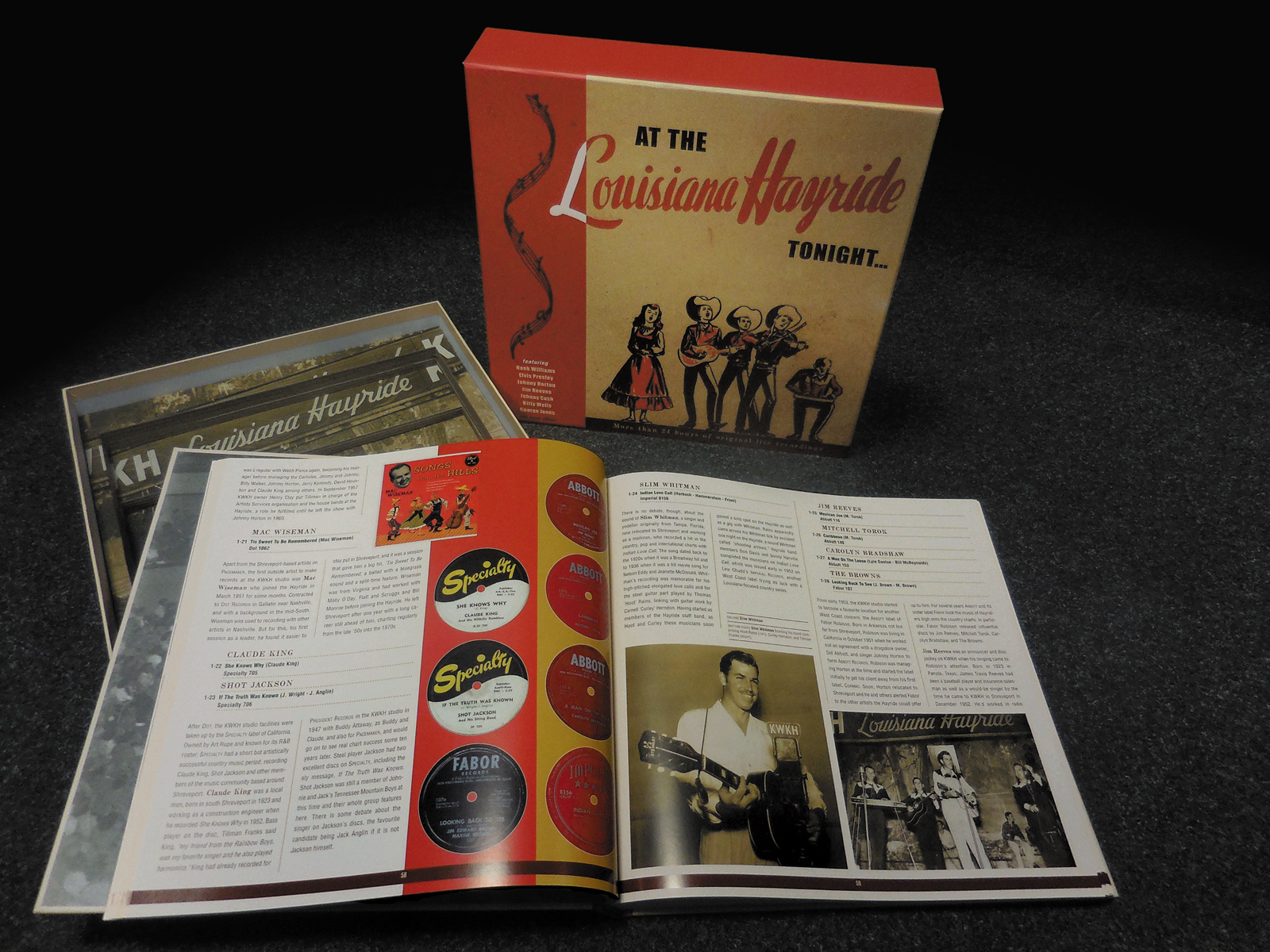 The bulk of the text is by Hawkins and is actually devoted to an almost track-by-track breakdown of Lousiana Hayride’s twenty discs. For each disc, Hawkins places the performances in context, both in terms of where they come in the arc of each performer’s career, as well as within the history of the show itself. The source of the recordings is identified, with a diverse selection represented. It’s mostly from transcription discs, “though normally it originates from discs or tapes preserved for the purpose of reassuring advertisers or for playing to prospective advertisers.”

Hawkins does a fine job of pointing out aspects of the show which are “of their time,” such as when the announcers, like Logan or Norm Bale, would mention as to how pretty the female musicians are, as well as any women who might participate in the Beat the Band segment (a “Name This Tune” kind of contest). The word “leer” is used at one point, and it’s fairly accurate, so points to the author for being willing to point out the fact that even though it was the ‘50s, it was still creepsville. 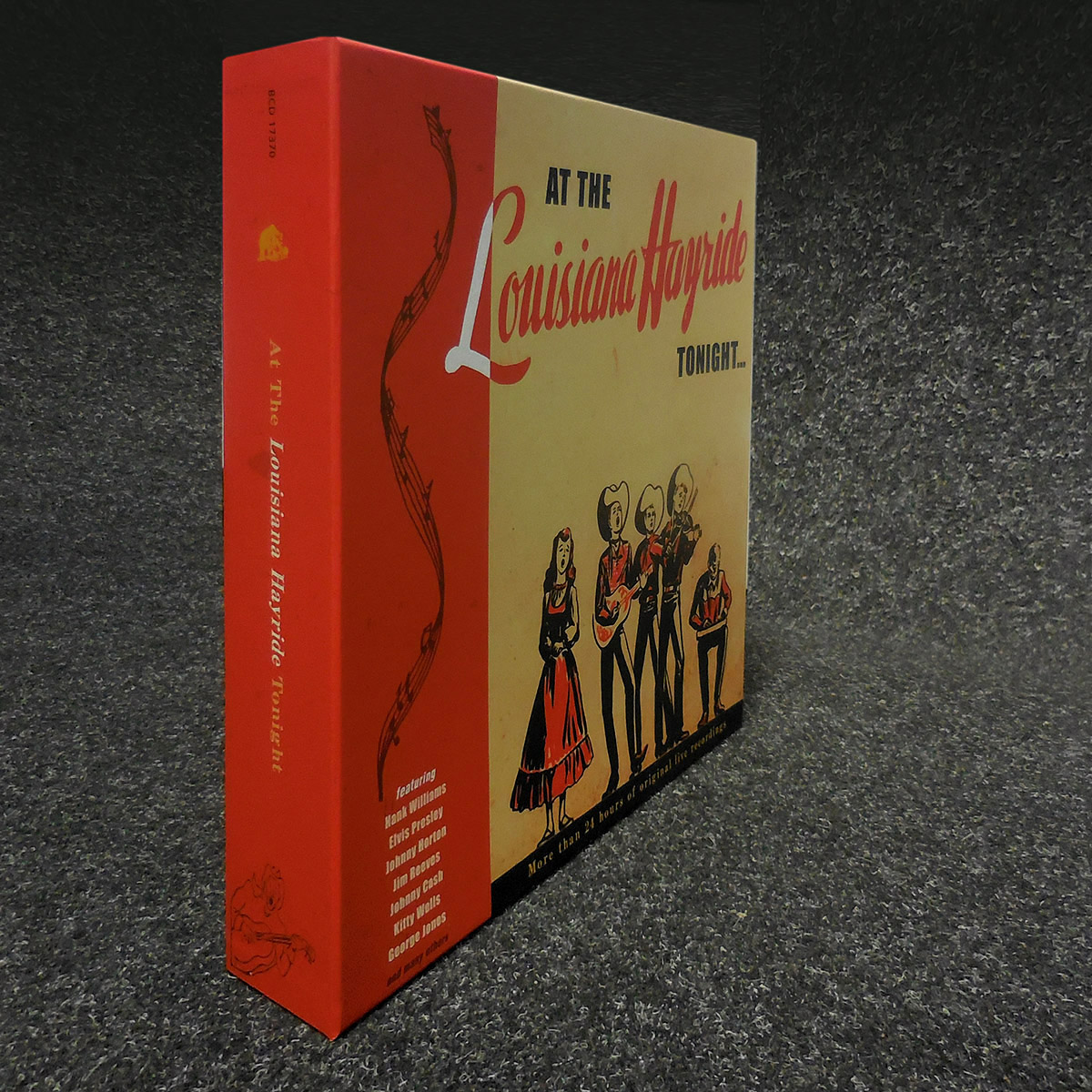 There’s a bit of crackle and hiss on some of this audio, but it’s actually of rather high fidelity. Granted, at the time these broadcasts were made, there wasn’t quite the array of microphone techniques as available now, so it’s not like every instrument was individually mic’d, meaning the vocals are way up front in the mix, with the instruments somewhere in the background. Depending on whomever was mixing, or as to how folks were set up on stage, you can hear more or less of the guitars, bass, or drums. The guitars — especially pedal steel — come through best, and the low end is a bit muddy, although instrumentals, like the Dobber Johnson fiddle tunes that kick off quite a few shows, do better. Occasionally, a really high instrument will overcome the vocals — a March 1960 performance by Grandpa Jones of “Mountain Dew” almost sees Jones’ vocals overwhelmed by his frenetic banjo playing.

Obviously, the big appeal to this collection are the Elvis Presley appearances, which helped launch the singer’s career way back in 1955-56. At 16, he’s actually got the second most performances in the set — that top honor goes to Johnny Horton, with 19 — but they’re arguably of greatest historical note. His final appearance on the show, in December of ‘56, for instance, marks the debut of the phrase “Elvis has left the building,” said after his final song at the State Fairgrounds in Shreveport. 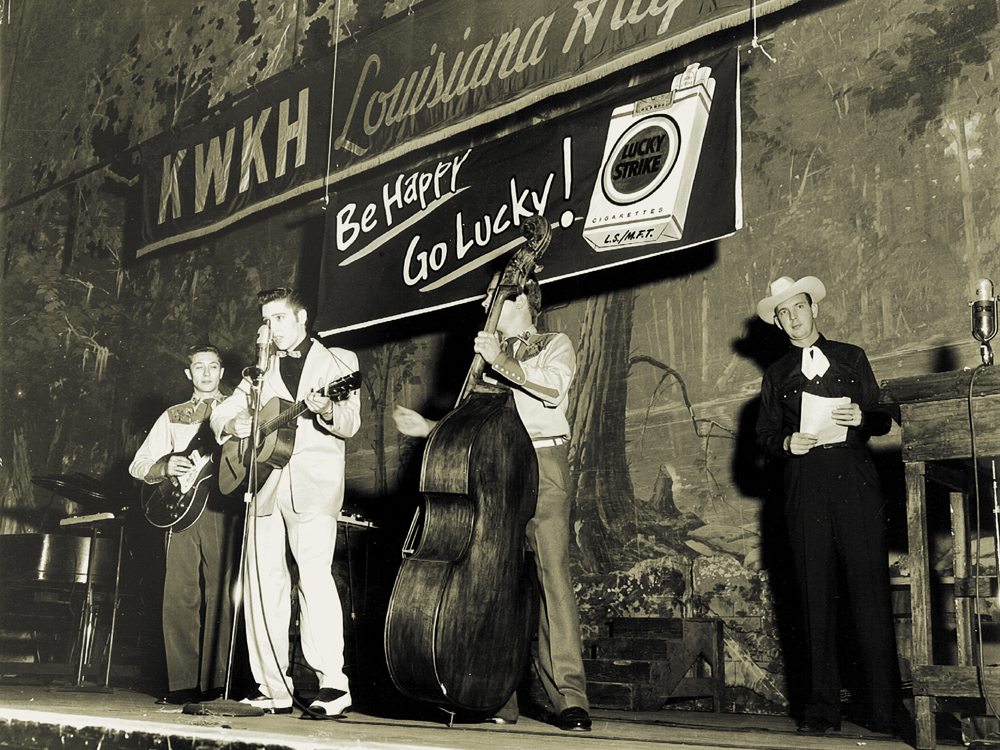 Elvis’ tracks have been released in various formats over the years — including a version on Tomato Music in 2002 called Roots Revolution, which saw the audio of the backing band supplemented with present-day re-recordings — but this is the best the original versions have ever sounded. There’s also a couple of performances which never made it onto the supposedly complete recordings from the Hayride — Memphis Recording Service’s The Complete Louisiana Hayride Archives 1954-1956 from 2012 — including “Shake, Rattle, and Roll” and “Little Mama” from the March 3, 1955 show.

However, there’s also performances from the likes of Hank Williams, Johnny Cash, Faron Young, June Carter, George Jones, Jim Reeves, Ernest Tubb, Slim Whitman, and more. There’s even rockabilly artists like Warren Smith and Bob Luman. Cash’s performances were released on Scena Records in 2003, and they sounded pretty good, but having them in the context of the actual show, surrounded by other performers, really puts things in context.

On disc five, Cash’s performances of “So Doggone Lonesome” and “I Walk The Line” bookend George Jones doing his song, “You Gotta Be My Baby,” and a countrified-yet-jazzy version of Fats Domino’s “My Blue Heaven,” as sung by Jeanette Hicks, and after is a Slim Whitman tune. That’s certainly a better idea of what was going on in music at the time than just immediately following it up with “Big River,” as the Scena compilation does. 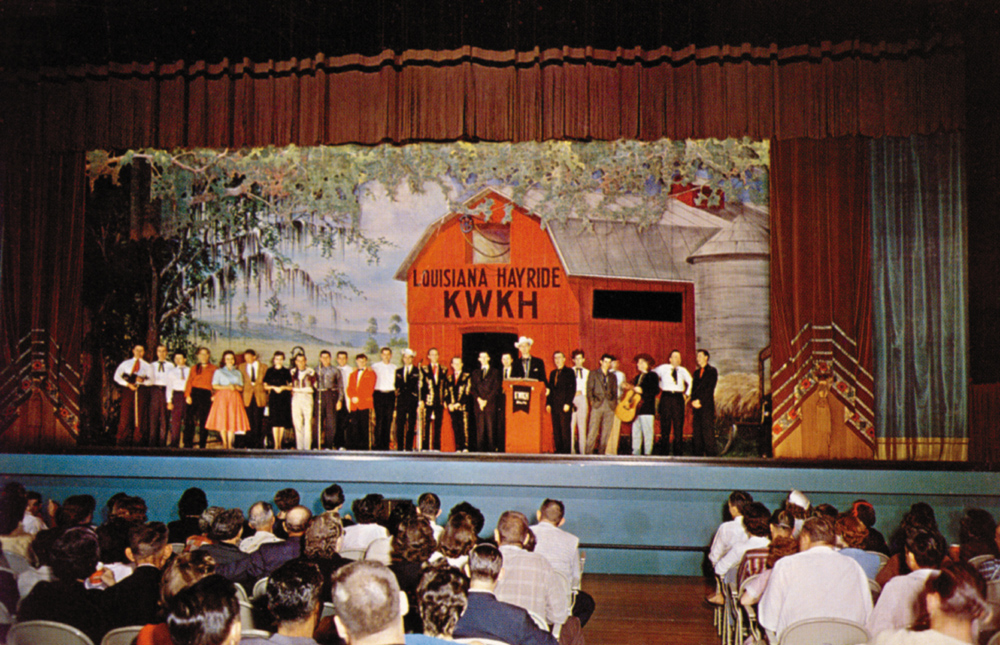 What’s astonishing is the number of cover songs, although at the time, it would’ve been completely normal. Now, the idea that a singer or performers would play someone else’s song as something other than a lark is kind of out there, but during the Hayride’s time and before, an artist would attempt to gain popularity by hitching their wagon to a popular track. In some cases, it would take several versions before it caught on as a hit, although in the case of many of these performances, they were never really recorded and released commercially. For instance, George Jones knocks out a version of Little Richard’s “Long Tall Sally” that’s amazing, but is sadly truncated at a minute and a half. June Carter absolutely kills a country take on Chuck Berry’s “Thirty Days,” and “Red Cadillac and a Black Mustache” originator Bob Luman absolutely smashes an Elvis-like version of Charlie Rich’s “Lonely Weekends,” and those are just a few of the standout versions.

In addition to the various big names, there are just as many local performers and regulars that are likely only familiar to serious crate-digging country devotees, and that’s another aspect of the appeal that At the Louisiana Hayride Tonight has going for it. On only the set’s second disc — the first of the live show extracts from the show’s run — it features a take on the Merle Lindsay song “Water Baby Blues” by guitarist Lucky Bob Davis, which is ferocious rock ‘n’ roll playing, made all the more amazing because it was recorded in October of 1951. The same goes for those aforementioned Dobber Johnson fiddle tunes which kick off quite a few episodes. 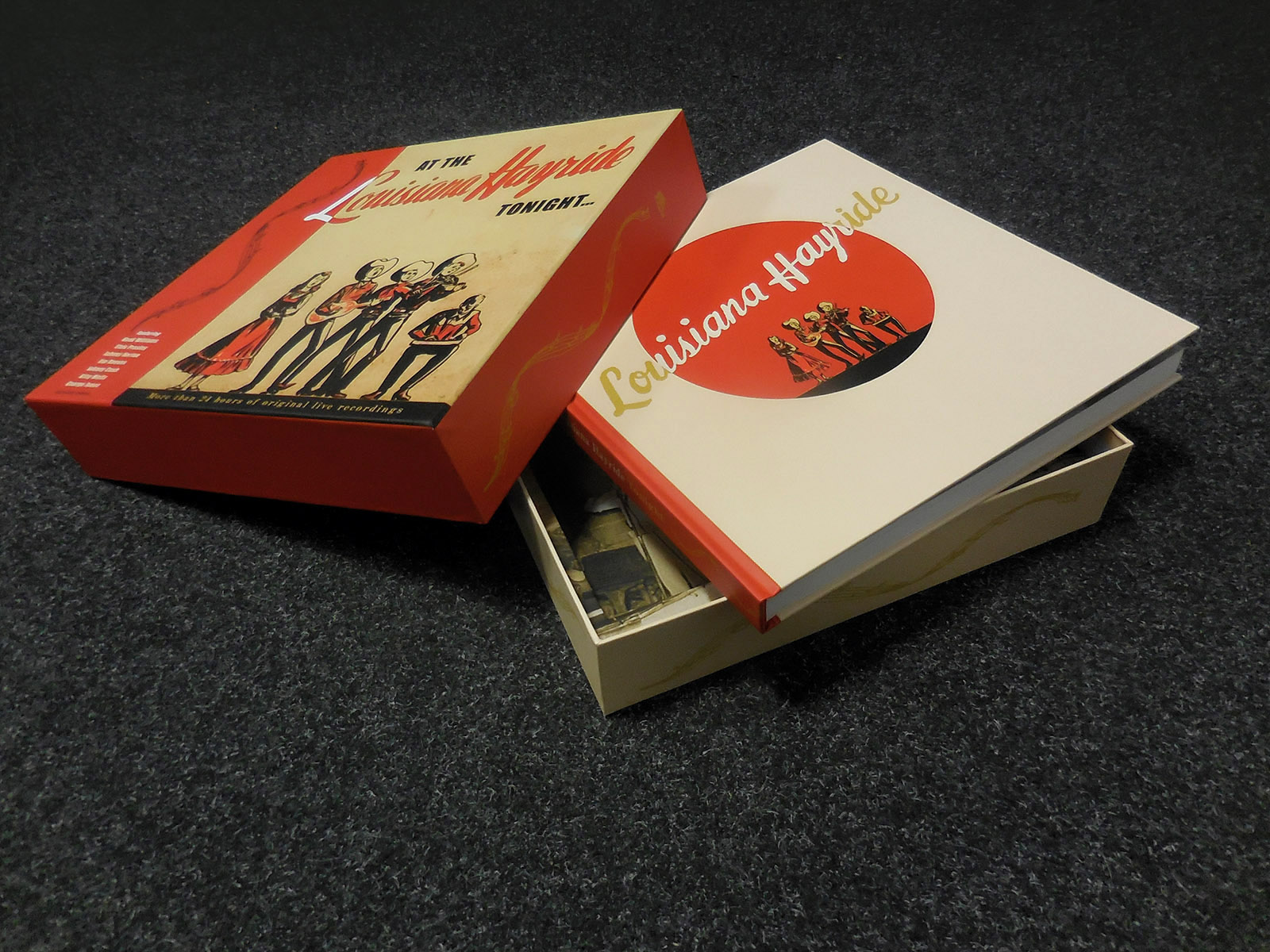 It’s little discoveries like these that make Bear Family’s set worth purchasing for heavy devotees of country music, especially when combined with the rarities and covers. The book will put everything into context for those who’ve always considered the Hayride a country cousin to the rather more famous Grand Ole Opry, and the hours of music will let you really dive into the show’s considerable impressiveness. It is, obviously, a big deal, and a serious commitment in both time and money, but those willing to drop the coin and immerse themselves will find At the Louisiana Hayride Tonight one of the most rewarding musical experiences of their life.