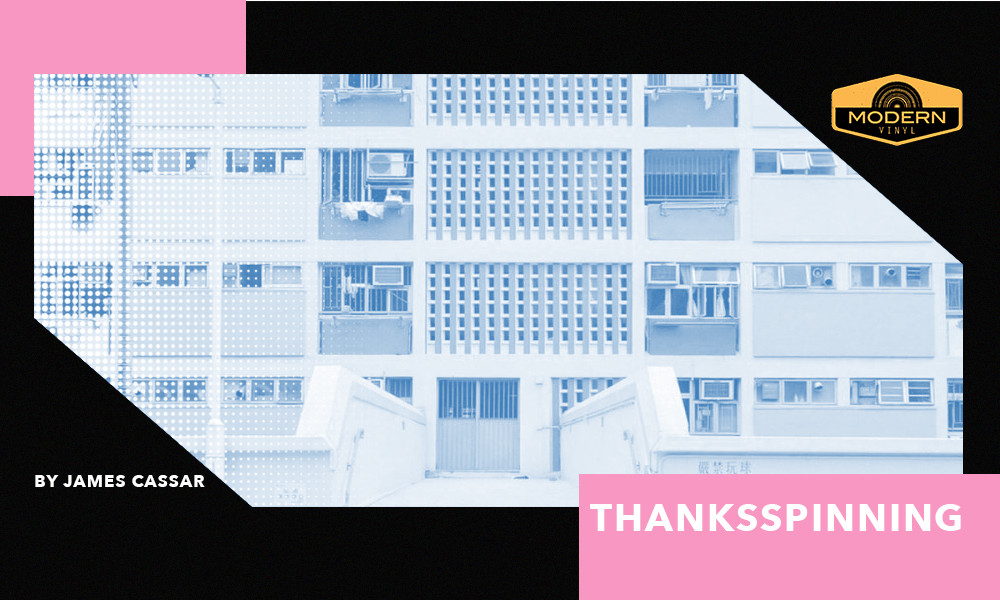 My name is James Cassar. I am Modern Vinyl’s Managing Editor.

A record I am thankful for is Oso Oso’s “the yunahon mixtape.”

In any relationship, platonic or otherwise, there’s a certain shared victory in moving past small talk. As a person who built his flimsy social media persona atop 140-character conversations, that’s all I had in my late teens and early twenties. But when you cross that threshold into deeper waters, there’s a tangible, palpable shift. Soon you’re drowning in stories told in confidence, and it’s almost a fate you don’t want to be rescued from, especially if the bonds are still there when your own life’s tides shift.

the yunahon mixtape catalogs this interpersonal oceanography. It’s a loose narrative that charts a course through a relationship, lingering on its soft, pillowy middle and speeding through the pitfalls that might follow. For any twenty-something, it’s an ideal adventure: you’d want to treasure the bits of any experience that made you feel human, and just simply acknowledge the parts that made you feel less so. Despite its fictional bearings — Yunahon isn’t a real place — and although the record was almost entirely written by vocalist/guitarist Jade Lilitri, he couches his sentiments in a cast of four recurring characters; the implied quotation marks in the record’s storytelling create a sense of lived space.

On “the bearer of the truths,” Lilitri delivers a off-hand remark borrowed from one of his Yunahon residents, “this is chill, but it’s temporary, like a childhood or nice scenery/but with seasons, the scenery changes.” yunahon is an all-weather excavation of what changes the people closest to you. It begins on a beach, as Lilitri’s guitar lines spring upward to avoid a big, big wave on “reindeer games.” The lukewarm reminder of fall informs the crisp power pop of “shoes (the sneaker song),” while “the slope,” with its angled reverb and flecks of falsetto, bites of winter. Throughout each of these seasonal pockets, Oso remains tied to its high regard of love and its many mutations, enough to sacrifice traditional pop songwriting and the notion of an album as a unit. (Remember: it’s a mixtape.)

Whereas Oso’s debut LP Real Stories of True People, Who Kind of Looked Like Monsters functioned in pop punk’s adjacent courtship with indie rock, yunahon took the romance to the next level. It pieces together clever homages to the genre’s emotional intelligence with Lilitri’s casual vocals and curbing melodrama, while remaining as genuine as possible. “the walk” takes its time to crawl to its explosive, double-time midsection, and the white-hot chords warming “the secret spot” heighten the action long enough for another satisfying bridge. The arrangements on yunahon, despite their quick directional changes, aren’t complex, but it’s in their universal simplicity where a listen can become deeply felt.

Yes, I realize this record came out this year, and yes, I also realize the hyperreal, text-message speak of 2010s emo has charmed me since the beginning of this series 1. There’s a line that could only exist in 2017 where Lilitri takes a listener to his iPhone settings, where he turns off his read receipts. There’s just something to note about the way this record internalizes love’s complications without sugarcoating when they show their teeth. (In fact, “the secret spot” brings the notion of viewing someone through rose-colored glasses to the forefront, enough to tell listeners that it doesn’t always end well.) That’s an important thing to learn at 23, or at any age. Love changes your plans, and it can change you, too. It’s an imperfect emotion informed by how you package your understanding of another person, warts and all.

the yunahon mixtape doesn’t really spend too much time meditating on spring. I had heard this record twice during that season, once over a series of unofficial SXSW showcases and once, front to back, over a series of stories told in confidence. There were implied quotation marks throughout that second listening party, there were talks of our lives’ characters. It was in a real place, and the scenery didn’t change. It was just two people and this record.

And sometimes that’s all you need to wash up on someone else’s shore.