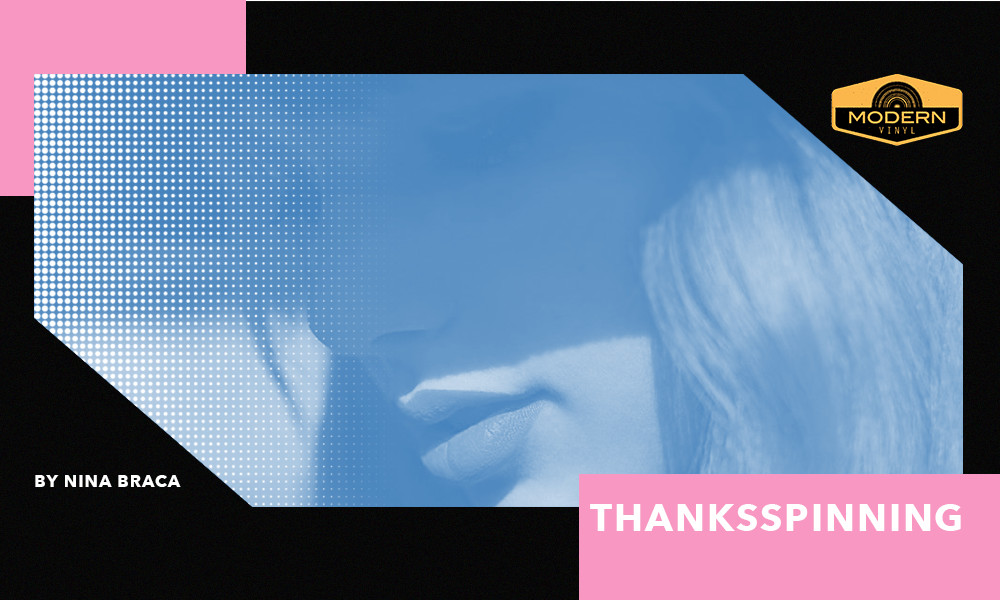 My name is Nina Braca. I am a writer for Modern Vinyl.

A record I am thankful for is Taylor Swift’s “Red.”

In fall of 2012, I was going through a bit of a rough patch. I had taken a “break” (whatever that means) with my high school boyfriend, my grandfather had just died, and I was adjusting to the weird concept of “college.” I wasn’t far from home, but felt all over the place; it’s a normal thing for an 18-year-old to feel, but at the time, I was truly going through it.

In high school, I was always a fan of Taylor Swift since I was a) a blonde girl who played guitar and b) someone with a lot of unrequited crushes. I sort of got out of that phase by the time I reached college, but then Red came out in October. And, at the time, it felt like a soundtrack to my entire life.

The album opener, “State Of Grace,”  might be Taylor’s most “emo” song (sorry), but it fit in perfectly with where I was at. It was a different sound for Swift, but when her vocals start, you’re hit with that wave of classic Swiftian lyrics, echoed over a beautiful harmony. The idea of the song itself is simple: having a crush on someone you never really expected to have a crush on. In that beginning “crush phase,” you are in a temporary “state of grace” where nothing bad has happened yet, which was exactly where I was in 2012. All my friends would gather in the suite common room to watch The Walking Dead, and I would spend the entire hour walking around campus listening to this song. The lyrics, “I never saw you coming, and I’ll never be the same,” honestly echoed in my mind for about six months. I felt understood by Taylor, as weird as that sounds, but her words, “I loved in shades of wrong,” helped me understand that we all make mistakes, even me, as a tiny 18-year-old, getting out of a bad relationship.

I was also able to freakishly relate to “Treacherous” which is a track that starts out as tiny whispers of admiration for someone you shouldn’t really like and explodes into a full-blown crush, whether you like it or not. In this track, Swift confesses, “this slope is treacherous, this path is reckless/I like it/your name has echoed through my mind and I just think you should know.” The slow build from acoustic guitar strumming to a much more intense soundscape is the perfect example of how hard it is to actually have a crush on someone who might not be good for you. We’ve all been there, right? I was there in 2012. And again in 2013, Honestly, I was there in 2015 and 2016, too. It happens. Thanks, Taylor.

2012 was tough for me in many ways. I started to have a strange and sometimes unhealthy addiction to going on runs at every and any hour of the day. During Hurricane Sandy, when our school was closed and classes were canceled,  we were all advised to stay indoors. Naturally, I went outside and ran in the hazardous conditions, blasting “I Knew You Were Trouble” on my iPod touch, since I should have known better than to get involved with someone who was, quite literally, a lot of trouble. Hearing the lines, ”he was long gone when he met me/and I realize the joke is on me,” helped me realize that as much as I wanted to be with this person, they were way too far away. Figuratively, of course, since we lived about 12 feet away from each other.

Throughout the year, I went through very weird and sometimes uncomfortable friendships and relationships that confused the hell out of me. I have a fond memory of walking to the campus gym and listening to “Holy Ground” on repeat. The song is a love letter to a past relationship that didn’t work out, but you can’t stop thinking about where it could have gone wrong. It’s not a sad song, which made it the perfect track to help me feel better about myself.

By the spring, I couldn’t listen to “State Of Grace” anymore, since the person it reminded me of was no longer in my life. (It took me years to listen to it again.) Instead, I connected to  “All Too Well,” which is known by most as a top-tier Taylor track. It’s a simple breakup song that chronicles the little things you remember after a separation, not in a malicious way, but in a growing up and growing apart manner. At one point, it reads, “Autumn leaves falling like pieces into place and I can picture it after all these days/I might be okay but I’m not fine at all.” Those words had cut me to my core, since I could vividly remember the leaves falling down (specifically during Hurricane Sandy) and being in a relationship that I was no longer a part of. It helped me reflect and move on.

This album goes through, quite perfectly, the motions of a relationship. You’ve got “the crush phase,” the relationship itself, the breakup, and the reflection. It’s the perfect balance, which is why I’m thankful for Red. I’m also thankful for the deluxe edition that features six more tracks, but I think I’ve written too much already.