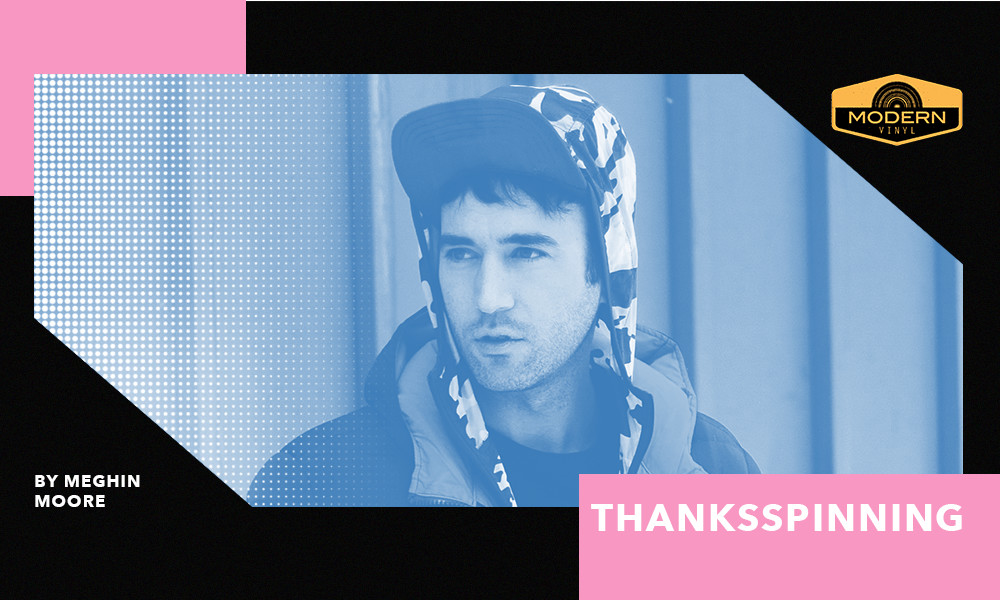 Disclaimer: This is technically supposed to be a piece about an album. I’m breaking with tradition, as I’m thankful for Sufjan Stevens’ existence through his various albums. For me to tell this tale, I can’t pick just *one* album, because it’s a little more complicated than it seems.

My name is Meghin Moore. I am Modern Vinyl’s Managing Editor.

I am thankful for Sufjan Stevens.

May 6, 2015 was the day I realized why people seek solace in religion; why people seek knowledge from a deity of sorts. It was also the first time I had seen Sufjan Stevens perform. His show at Richmond’s Altria Theater led me to my own, Pam Beesly-esque “I feel God in this Chili’s tonight” moment, and it certainly wasn’t because of the sangria I had before the show with my mother. The Carrie and Lowell tour backdrop had some fairly church-like qualities that were only amplified by the Altria’s extravagant interior design.

Religion and I have had a weird relationship over the years. At my dad’s request, I was baptized a Methodist, but I was essentially raised as an Episcopalian. My family was lax about going to church, so religion wasn’t exactly a strongpoint in our household, save for the occasional Christmas church service at St. Luke’s Episcopal Church in Lebanon, Pennsylvania. My First Communion wasn’t some huge celebration; it was quite informal. It was also my first experience with wine, one that literally left a bad taste in my mouth about religion as a teenager.

As I got older, I started questioning everything, from the mere existence of a higher being, to why bad things happen to good people. A few major events led to this: my grandfather dying on the same day his son, my dad, was deploying to war (effectively delaying his deployment by a few days), as well as my mom’s cancer diagnosis. Where some of my peers would cling to religion fanatically in times like these, I clung to questions that still remain unanswered. It was about that time when I had my “musical enlightenment period,” discovering Sufjan’s music, starting with Seven Swans, which ultimately led me to discovering the joys behind Illinois. And then came one of my favorite albums to date: Carrie and Lowell.

His music glides on personal and spiritual levels, exploring topics like death, grief, the occasional serial killer, morality, and most importantly, family.

When I first started getting into his music, the religious undertones didn’t smack me in the face like they do now (partially because I wasn’t as familiar with the Bible stories told on Seven Swans as I should have been…sorry mom!). On his Songs For Christmas album, he sings my favorite version of the hymn, “Come Thou Fount of Every Blessing.” It’s one of the loveliest renditions I’ve heard of that particular hymn, and as I got older, I began to dig a little deeper into the meaning behind some of his lyrics. “Casimir Pulaski Day” always struck me as interesting, because of how frank it is about the themes of death and God, and how they seemed to parallel my thoughts after learning how to grieve in the wake of my grandfather’s death. Why glorify a God when He causes such sorrowful heartbreak in the world?

Illinois also featured one of my personal favorite Sufjan songs, “The Seer’s Tower.” Sure, it talks about the impending apocalypse the Bible claims will happen one day, but it reminds me that God (in some form) is always omnipresent, watching over the world. It gives me some comfort to at least know that a being is always watching over a world where there’s constant turmoil and chaos.

“Abraham” and “The Transfiguration” from Seven Swans are two examples of the religious undertones not hitting me until I was older, in fact only when taking a world religions class in college that was taught by a kindly Mennonite. To date, I regret not opening up a conversation with him about music and spirituality.

And then there’s Carrie and Lowell. When I saw that tour, I felt God in the Altria Theater. A feeling I hadn’t known before radiated through me, and I had a truly religious experience, complete with tears and goosebumps. Ultimately, it’s the album that gave me belief in something. The album’s closer, “Blue Bucket of Gold,” solidifies that fact for me. It might not offer all the answers I seek in life, or even to my relationship to religion, but it offers a gentle hope that I’m not alone in my beliefs.

Earlier this year, Sufjan weighed in on the current state of the world, religion included. His views listed in his post accurately reflect how I’ve come to terms with my own: “God is love, period. God is universal, nameless, faceless, and with no allegiance to anything other than love.” He also noted that we, as a collective society, should “get real and get right with God.” How? We must “love your enemies, serve the poor, give everything away, and put yourself last.” These are principles that my agnostic self relates to deeply, that make me question why people who call themselves “religious” don’t even adhere to those simple principles of life. For all of that, I’d like to give thanks to Sufjan Stevens, for without him, I’d still be an agnostic veering less on the side of finding religious enlightenment, but steering towards the belief that God isn’t real.