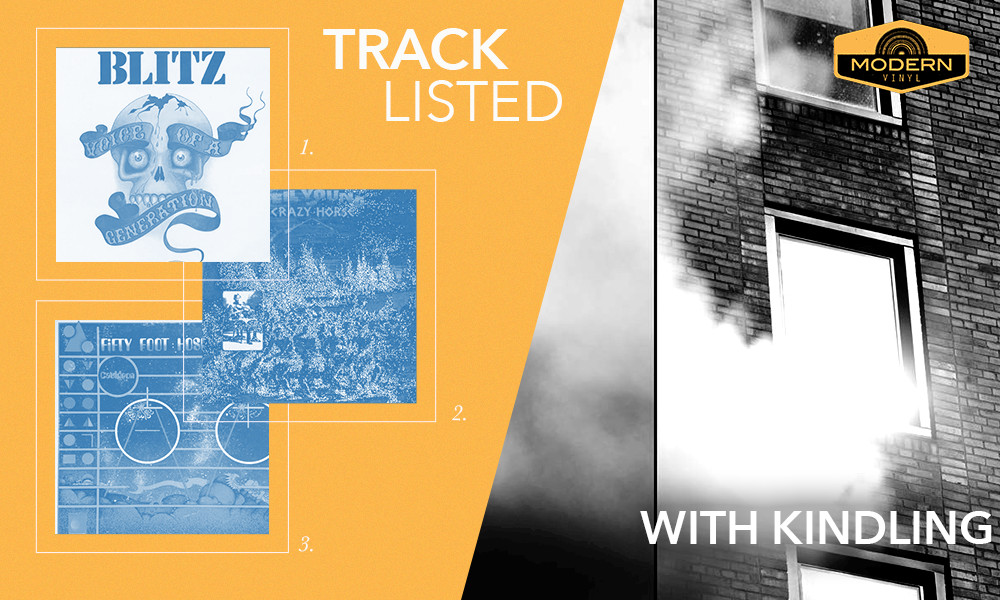 If Kindling’s Tracklisted looks familiar to you, that’s because Stephen Pierce put together a list of the band’s influences for the running feature that 6131 Records does with their artists. Technically, this might be “cheating” a little bit, but Pierce was able to expand on the first 10 songs in Kindling’s 23-song “Inspirations” playlist for us.

Black Sabbath — Hole in the Sky

I love Sabotage. It’s my favorite Sabbath record, which would put it high on my list of favorite records, period. I go through these spells of punishing the people around me by listening to the same record or the same band for months at a time; sometimes several times a day, or on repeat or whatever. Just kind of the sort of thing that would be really annoying if you’re not in the same mental groove as me.

A few winters ago, I somehow decided that it was “the winter of Sabbath,” and by the end of it, I would go from just knowing the songs and some vague history of the band to developing, like, an obsession. I don’t think Hush would be a shade of the record it is without that obsession, and people always think I’m joking when I say that. What really resonates with me about Sabbath is their sense for when to hold back and when to unleash, putting these impossibly skillful solos in the middle of an otherwise relatively accessible and simple framework. It serves the song really well. Beyond being a huge inspiration to things like song structures and guitar technique, they’re also the reason I keep looking up ’70s SGs on Reverb.

Blitz — Voice of a Generation

Blitz, one of the great rock ‘n’ roll bands of early punk. Every song should be this anthemic, and with Blitz, every song kinda is. As a kid, the EPs and Voice of a Generation were all I had heard — I was told to steer clear of their second LP — it was presented to me by an older punk as being pretty miserable. Somehow, after all those years, I ended up listening to it and loving it. I mean, it’s not a banger like Voice of a Generation, but it’s pretty cool in a New Order-y sorta way. It was kind of exciting to hear a band that I’ve loved forever in a weird new incongruous light. Back to this one, though. It’s just a great rock and roll song that’s been with me for a long time, and while I can’t really put my finger on exactly where its inspiration lies in context of Kindling’s sound, something I listen to as much as this has gotta leave its mark in one way or another, right?

This song is fucking great, particularly the moments where Exene harmonizes with herself. Maybe this is blasphemy to a big X fan, but this is my favorite song of theirs. For a long time, I was really only familiar with the first X record — I was late to See How We Are. After Los Angeles, I checked everything out chronologically, and I was discouraged from checking it out by how bad a record was — I thought, “no way they’re gettin back on track from that.” Anyway. I feel like “You” could almost be mistaken for a Replacements song from the first chords, and I love how Exene’s vocal phrasing weaves around the guitar accents. The subtlety of the addition of synth appeals to me, too.

It’s Neil, man. Broken Arrow doesn’t get the love it deserves. Every time I would play this song in the van or wherever, Gretchen would mention how into it she is too, and we had these long conversations about what makes a song so instantly appealing. The first time I heard it, it felt classic, and not just because it’s Neil doing his Neil thing. There’s some understated something about this one, particularly in the change from verse into chorus, in the patience in vocal phrasing, and the guitar dissonance in between chords, that we tried to hit with some of the moments on Hush. It’s just got such a good vibe to it.

It was hard for me to pick between Fairport songs for this playlist. They and Richard Thompson’s solo stuff had been — along with Sabbath — one of the things that I had on endless loop when writing for the LP. I went with “Book Song” for a couple of reasons: Firstly, Sandy and Ian’s voices work so well together, especially on Fairport’s more subdued songs like this. That’s a constant point of inspiration when Gretchen and I are figuring out where our vocals are going to land. I love the quiet sitar that weaves in and out of the mix throughout, along with what seems to be a reversed guitar, if you listen closely.

This is one of the songs that we would look toward when considering how the addition of sitar to some of the songs on Hush would work. Also, Richard’s guitar playing is incredible on this and everything he does. I’ve never heard a guitarist that plays like him, and his technique keeps me practicing and trying to be a better guitarist. You’d be able to draw a pretty short line from his solos, along with Iommi’s, to a lot of my guitar work on Hush. Not necessarily stylistically, but listening nonstop to those two guitarists definitely left me feeling empowered to push my own playing to places less familiar to me.

Lilys — Day of the Monkey

Eccsame the Photon Band is a record that I only heard for the first time a few winters ago, and it’s one of those records that totally would’ve changed my life if I had heard it as a teenager. For a band that I knew mostly for being loud, this record is so patient and reserved. There’s a lot going on in the blank spaces and in-betweens. I used to have a twelve-string guitar, but I sold it a while ago when I had to get rid of a bunch of stuff in a move to a different city. This is the song that, along with listening to a lotta Byrds, made me want to pick up an twelve-string again. It ended up being a guitar that helped me write a bunch of the songs on Hush. It’s on a good portion of the record, actually.

I don’t know why this isn’t the most famous song. A Stooge and an MC5er playing exactly what you would hope they would play. It’s got the drive and energy and unrelenting leads to rival a song like “Seach and Destroy,” musically, anyway. I think they only got around to recording this and one other song, but there’s a lot of live stuff out there. Scott Asheton is one of my favorite drummers of all time, and Sonic’s leads are so airtight. This and a lot of the Stooges stuff, particularly Fun House, represents to me everything that’s exciting about rock and roll. Practiced and precise, but with a real “the wheels are gonna come off at any moment” element of danger. The song’s a little long, but if I wrote that lead, I’d probably also want to get as much mileage out of it as possible.

Greg Sage has this ability to write these songs that carry a lot more weight than your average three minute punk song is able to. I don’t know if it has more to do with the understatedly panicked weariness of his vocal delivery or the correlating anxious-yet-somehow-spacious guitar, but he’s able to very economically convey a whole hell of a lot. No one sounds like the Wipers sound. This is one of the highlights of a later LP of theirs, but if you ask me, it belongs right next to a canonical song like “No Generation Gap,” despite being separated by over a decade.

Here’s a ripper from an LP that I’ll probably never own. There was this label, Radioactive Records, I think, that did these real dodgy, overpriced bootlegs of less-known and rare psych, garage, and folk from the late ’60s, and I was a total sucker for them all. Usually they’d have, like, one or two great songs each if you were lucky — you know, like — you could tell in most cases that there was a good reason why they were never super popular bands in the first place, but there was this great feeling of discovery and chance that came with buying in. This was one of the true standouts, though. It’s good, challenging, and varied all the way through — sorta in a similar Fluxus/Dada/experimental pop vein as the band United States of America from the same time, who I also really like, but who didn’t make a song this wild and untamed.

Aaron is really good friends with Yume Bitsu; played in their touring band for a period, even. This was back before I knew him personally, and was just really into his music in Landing, which in my mind, and conveniently enough, in reality as well, was wrapped up in the same community as Yume Bitsu. This song is a pretty uncharacteristic rocker for them. It takes a pretty simple progression and hangs out within it for the whole song, but grows, evolves, and expands once it settles in. It shows how much can happen within repetition. Complexity within simplicity. Unfortunately, I never got to see them play, but they were one of the first bands of this type that I heard — by virtue of their alignment with K Records — and I think they’ll always have this spot in my consciousness because of it.

This song kills me.