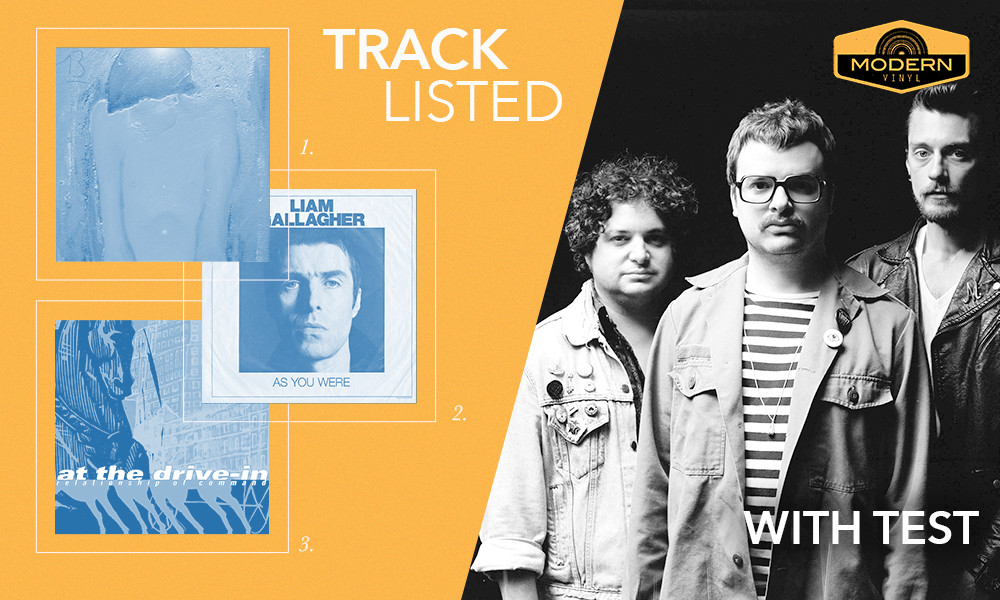 LA trio TEST is all about that British garage CRUNCH. The release of their debut LP, Brain In / Brain Out, is a spectacular example of how to blend the best kinds of grime and post-punk, holding a candle to the likes of Drenge, or Preoccupations, or The Hives, in executing savagery for just over 30 minutes.

A couple of the bandmates discussed some of the songs they’re listening to at the moment before going about touring their new record, and you can listen to them below.

Graham Coxon is one of my favorite guitar players. I love the way he uses noise to create really immersive and emotive textures. “Bugman” is an awesome showcase of just how abrasive he can get before slamming back into the riff. On our album, I definitely found some places to get dirty and noisy and atonal, and that’s all because of Graham.

I think Smashing Pumpkins are incredibly underrated as a band. They get lumped in with grunge and judged on a few singles and that’s it. That’s just wrong. The best description I ever heard of the Smashing Pumpkins was “Black Sabbath meets My Bloody Valentine.” The dynamics in this song are also great, the way it see-saws from brutal power to this really open chorus is jet fueled magic. Also Pumpkins do this thing I call the dinosaur roar on guitar. Sliding from a very low note on the neck to a higher mid-range note, sounds like a roar. There are two at the front of the song; I absolutely put some on the album and it’s a major go to for me live. The dinosaur roar, it’s fun as hell.

Guided by Voices — Game of Pricks

Robert Pollard taught me that a song only needs to be as long as it needs to be. If the song is only 1:32, then that’s how long it is. “Game of Pricks” is one of their most popular songs, if not their most popular, but for good reason. It achieves lift off on the first note and doesn’t look back. It glides from one beautiful, ear worm melody to the next and it’s all over before you know it, but never does it feel slight, or lacking or unfinished. It is pop-rock, lo-fi perfection distilled down to its elemental essence.

Liam Gallagher — Come Back to Me

I listen to Oasis nearly everyday. They have songs that make you cry and celebrate the fact you’re alive all at the same time. That’s a clunky way of phrasing it but real Oasis fans know what I mean. Liam Gallagher’s new solo album is shockingly strong. Really, it’s better than half of Oasis’ catalog. “Come Back to Me” is a real dark horse, boogie kinda rocker tucked away at the end of the album. It’s my favorite right now. Rock n Roll NEEDS people like Liam and there aren’t many like him left. He’s still funny as fuck but has gotten wiser as he’s gotten older. He’s a true original that walks the walk, icon.

This album is a recent discovery for me. I read a review of the new reissue and based on that review alone I bought this album and was simply blown away. It feels like every classic album from the era but none of the songs were hits. Which is great, because you aren’t sick of any of them! I could have chosen any song on this album; the entire thing is jaw droppingly good. “Fire and Brimstone” is exactly that and it rocks harder than 90% of all music. It’s revelatory, religious, evil, grinding, badass mother fucker music. It’s the sound of a man with one lung making demon music in a chicken shack on his farm in 1971 on a three track recorder. What else do you want.

A power trio in its finest. They pull from shoegaze and ’90s grunge, which shouldn’t work but it does! These guys are pretty abrasive, loud rockers which is awesome in a industry that isn’t. And they’re making it. A band like them reminds me that it’s still possible to be an original monster in a sea of krill.

These guys get it. They are constantly proving that with the right attitude you can make it. Starting off as kids, they’ve been progressing the genre with catchy tracks and memorable riffs. Constantly changing sounds and styles, it proves you don’t have to be a one trick pony to appease your audience.

At The Drive In — One Armed Scissor

This track shows how melodies can be abrasive and confusing. Left then right. Make a lot of noise but still sound intentional and interesting.

Death from Above 1979 — Right On, Frankenstein

Less is more and this band always delivers. Especially with tracks like this, which have a irresistible “four on the floor” that doesn’t need to be fancy to be good. The just need a hook!

Bloc Party — Helicopter
Matt Tong. I’m always inspired by the ability to think outside the lines and with songs like this you can see why. It reminds me that it’s not what you play but how you play it that counts.

The new album from TEST, Brain In / Brain Out, is now available. Listen to the single, “Bleached Hands,” on Spotify below.