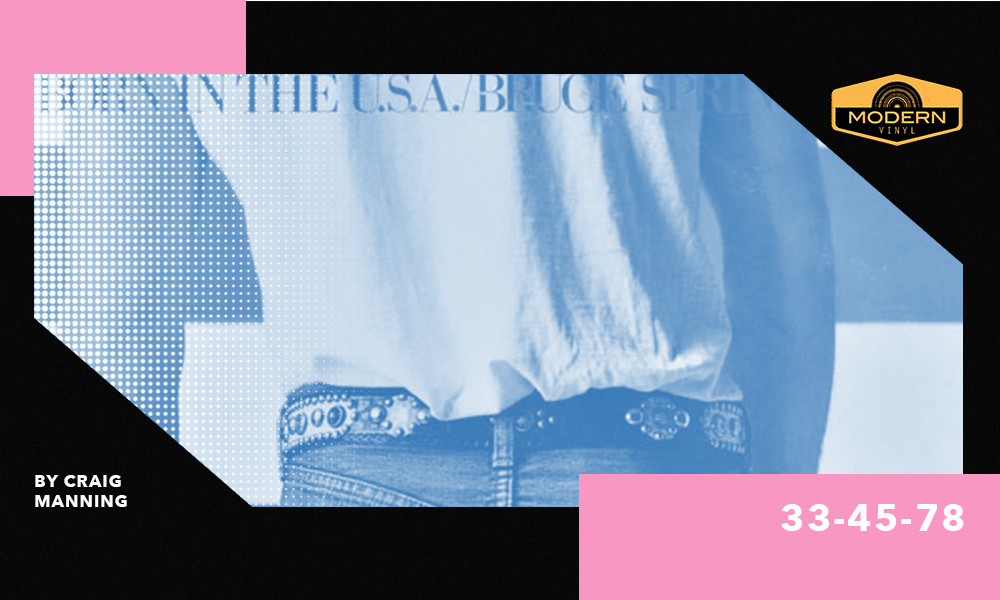 Die-hard Bruce Springsteen fans love to deride Born in the U.S.A. It’s their way of telling you they’re “real” fans, not those jumping on the bandwagon as Bruce blew up. On the contrary, they’re “cultured” enough to prefer the stark landscapes of Nebraska to the dated, synth-blasted ‘80s sound of U.S.A. They use words like “overplayed” and “overproduced” to describe the famed songwriter’s biggest record, while perhaps praising something more obscure like The Ghost of Tom Joad. And they’re probably tired of explaining to their friends that Born in the U.S.A. is not a jingoistic piece of macho rock, but actually a critique of pointless wars.

In general, I don’t get along with these people.

To be fair, Born in the U.S.A. is not Springsteen’s best record. I don’t think I’ve ever met a fan who prefers it to Born to Run, which is my favorite Boss record and my favorite record, period. It also seems pretty universally accepted that U.S.A. is inferior to the records that immediately followed Born to Run: Darkness on the Edge of Town and The River. These superior records certainly function as the thematic core of Springsteen’s catalog, but Born in the U.S.A. is also a lot deeper, more nuanced, and more complex than most make it out to be.

The reason for the wrongful Born in the U.S.A. malign isn’t hard to see. This record turned Springsteen from everyman rock hero to multi-millionaire pop star. It spawned seven top 10 singles, putting Springsteen in the company of Janet and Michael Jackson as one of the only artists ever to accomplish that feat for a single album. It also just sounds a lot more commercial than its predecessors, shedding the dust, grit, blood, sweat, and tears of earlier Springsteen records for something shinier and more radio-ready.

But if Born in the U.S.A. is a sellout record, it’s gotta be the greatest one in history. Instead of sanitizing his writing, Springsteen wrote with nostalgia and fury about the state of America. And instead of burying the E Street Band beneath layers of reverb and overdubs, Bruce let the full might of his sidemen and women explode behind him. The result is the most muscular Springsteen LP, but also one of the most vulnerable — at least if you take the time to look behind the roar of the arrangements.

The two most obviously misinterpreted numbers were the two biggest hits: the title track and “Dancing in the Dark.” The former was famously misused by Ronald Reagan, who took it as a pronouncement of pride and patriotism rather than a searing narrative about a damaged, neglected Vietnam vet. The latter, meanwhile, hides vitriol and bitterness behind the catchiest hook Bruce ever wrote. Springsteen penned the song in a flight of creative exhaustion and frustration after being told by manager Jon Landau that the album lacked a single. Landau was wrong six times over, and he still somehow managed to be right.

It’s the back half of the album, though, that’s always drawn me in. Side two — from “No Surrender” to “My Hometown” — is a string of songs about faded stomping grounds, squandered glory days, and enduring friendships. “We busted out of class, had to get away from those fools/We learned more from a three-minute record, baby/Then we’d ever learned in school,” Bruce sings on “No Surrender.” By itself, the song is an anthem. How could it not be, with opening lines that triumphant? In the context of side B, though — and in the context of the somber acoustic version Springsteen played on the Born in the U.S.A. tour — “No Surrender” is a heartbreaking hymn to better times. A track later, on “Bobby Jean,” Springsteen is wishing good luck to a friend who, for whatever reason, had to leave. (He wrote it about E Street guitarist and right-hand man Steve Van Zandt, who temporarily left the band after this record.) And while “Glory Days” sounds like a send-up of high school renown, it’s actually a poignant examination of how the glories, hopes, and ambitions of youth so often wither on the vine. In the final verse, Bruce boasts about going out to the bar with his friends and drinking ‘til he gets his fill. “I hope when I get old I don’t sit around thinking about it,” he muses about his wild streak, “But I probably will.”

I fell in love with the music of Bruce Springsteen during my senior year of high school. Throughout that spring, I listened to Born to Run every single day — often twice. As I approached graduation, I identified so firmly with the triumphant dreamers in those songs. I figured Born to Run would continue to dominate my listening throughout the ensuing summer (and it did), but I didn’t expect Born in the U.S.A. to land in my constant rotation too. On warm summer nights, driving home from adventures with friends, the back half of this record felt like home. In a lot of ways, I’d never felt closer with my friends. We’d defeated high school together and now we were taking our victory lap. But I was also cognizant of the fact that, in a few short weeks, we were going our separate ways. Things would probably never be the same again.

They weren’t. As August died, I drove away from that town and embarked on a new journey, at a university that none of my best friends were attending. When we all came back home the following summer, the nights were still great, but they lacked some of the “anything can happen” excitement of the previous year. We were no longer best friends staring down the barrel of a life change. Instead, we were very good friends, on hiatus from the different lives we’d started living without each other.

The one who still was my best friend — the person I could call about anything, the one whose house I’d spent so many nights at, just doing nothing — opted not to go back to school and moved off to New York City by August. On the day he left, I went back to Born in the U.S.A., once again seeking solace in its tales of friendship and home. It hit me like a cannon blast. “No Surrender” and “Bobby Jean,” these songs that had once sounded like anthems, now struck me as profoundly melancholy. “We swore blood brothers against the wind/Now I’m ready to grow young again,” Bruce sang in the former. “There ain’t nobody/No way, no how/Gonna ever understand me the way you did,” he proclaimed in the latter. I’m not sure you can appreciate the full magnitude of emotions behind this album until your best friend has moved half a country away from you, for good.

On the last track of Born in the U.S.A., “My Hometown,” the narrator muses about packing up and leaving behind the only place he’s ever known. Coming after a string of songs about nostalgia and good times, it hits hard. A place can tie you to your past, and leaving it in the rearview can be symbolic of turning your back on a big chapter of your life. For Bruce, “My Hometown” was symbolic. His next record, Tunnel of Love, was largely a solo effort. The members of the E Street Band appeared, but only intermittently and never all on the same song. And after Tunnel, Bruce broke up the band and embarked upon a decade in the wilderness.

The breakup wasn’t permanent. Springsteen brought the band back together briefly in 1995 to record a few songs for his greatest hits record, and again in 1999 for a world-conquering reunion tour. And in 2002, with The Rising, he finally acknowledged that he was better with the E Street Band at his back. For a long time, though, Born in the U.S.A. was Bruce’s farewell — not just to Steve Van Zandt, but to E Street in general. Maybe that’s why fans don’t love the record: without it, perhaps Bruce wouldn’t have indulged the restlessness that caused him to chase away his band. Perhaps the 1990s would have been another decade of classic Bruce albums, instead of bringing three records that rightfully get ranked near the bottom of his discography on almost every retrospective list.

Even if Born in the U.S.A. broke the E Street Band, though, it also celebrated them. Springsteen has made better albums, sure. But he never made one that captured the spirit of friendship more profoundly than this one. That’s why I love it 33 years after the fact, and that’s why I’ll still love it 33 years from now. Even though there are people and places and things that I’ve left in my rearview, this album never fails to bring them all back.