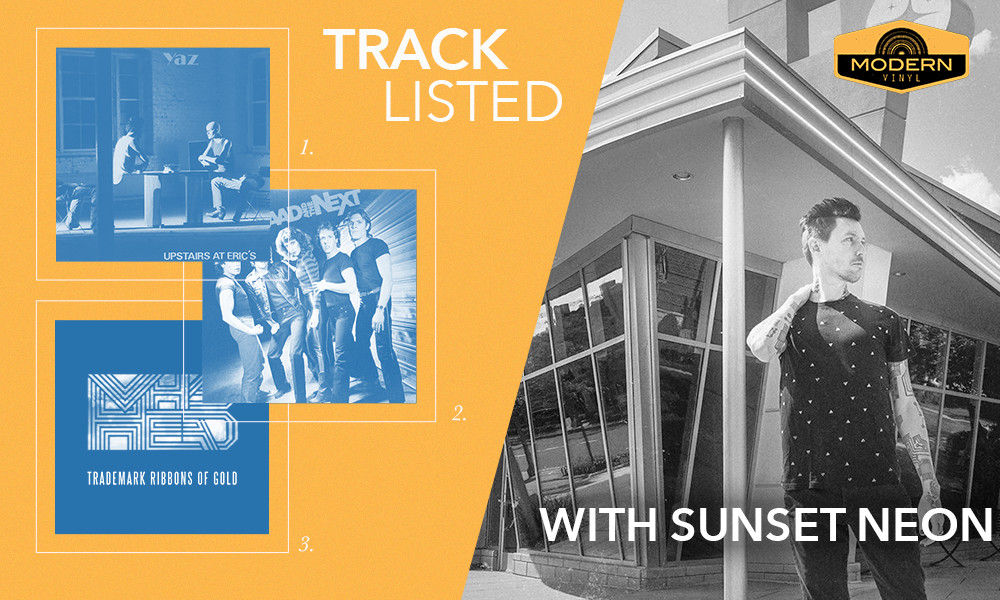 Whatever it is that defines “classic,” the ’80s are now “it,” and multi-genre artist/producer Bret Autrey, widely known as Blue Stahli, has started Sunset Neon in tribute of his particular love. He has produced a VHS, lo-fi power anthem of a debut album, titled Starlight, that brings the chill factor to Nu-Disco and the midnight-neon atmospherics, resulting in a nostalgia-tinged fest for the ears.

Bret took some time out of his busy work schedule to drop a Tracklisted playlist of artists who really drive home his aesthetic, and you can listen to it and read his thoughts below.

It’s far too fun to drive around blasting Jesse Johnson action. Going back and finding other stuff that members of The Time put out (in this case, the lead guitarist) just leads to a wealth of rad ’80s funk filled drum machines and synth programming. Every song sounds like it would be in a soundtrack to an action buddy cop flick.

Sebastian’s glitchy chopped up audio completely lights my brain up. His main tracks are phenomenal, but I especially love hearing him bring his staccato funk edits with more vocals in a remix. I’ve always been inspired by French house, but his stuff is always just a little bit darker and cooler to me.

The greatest synth line in history. Absolutely timeless and untouchable. This song could come out today and still sound fresh. I first heard this track in the opening credits of a TV movie when I was a kid, and it always stuck with me as having the feel of really exciting exposition, priming you for cinematic adventure.

I’ve always been more excited by working with audio than synths. I started making music in trackers back in the DOS days when all you had were 8-bit audio samples (mostly one shots) and a sequencer. I had moved away from those programs for a while and embraced the whole Pro Tools/Cubase/regular DAW platform, and when I first heard the glitchier French house stuff like Justice and Sebastian, it not only brought me right back to how much I loved doing crazy edits in trackers, it was also like hearing a guitar solo for the first time. These days, most of my main music programming is done in a tracker, and I will *always* be into chopping up random stuff that shouldn’t be synths and making them behave like one.

The Cure — The Walk (Infustion Mix)

Sunset Neon is pretty much random bits of my ’80s hazy nostalgia remixed through the filter of glitchy electronic music, so this track is just a perfect representation of that.

Sue Saad & The Next — Radioactive Dreams

I grew up on VHS b-movies and nothing was better than hearing an amazing song that I didn’t encounter anywhere else but the soundtrack. Something about that rarity, and the fact that such a gem would be hiding among a low budget post apocalyptic rock’n’roll musical is what fueled me.

Continuing on that “finding more stuff that members of The Time did” tip, Janet Jackson’s Control album by Jimmy Jam and Terry Lewis is just full of fantastic production. I’ve always been massively into the layered drum programming and collage patterns of bands like Front 242 and Skinny Puppy. Control was where I heard that type of drum programming I can’t get enough in a pop context. Or, at least to me, it seemed like everything I liked about certain industrial drum programming put into new context and demonstrating that there’s links, bridges, and opportunities for crossover between damn near any genre.

I love everything about the fact that VHS Head’s only sound sample sources come from intense sampling of old weird videotapes. Awesome experimental rhythm and beat collages built from memories.

This is one of the most fun songs ever made. Its eternal upbeat party atmosphere just feels like some kind of funk example of perfect unity. This track is just perfection and positivity, definitely something to strive for.