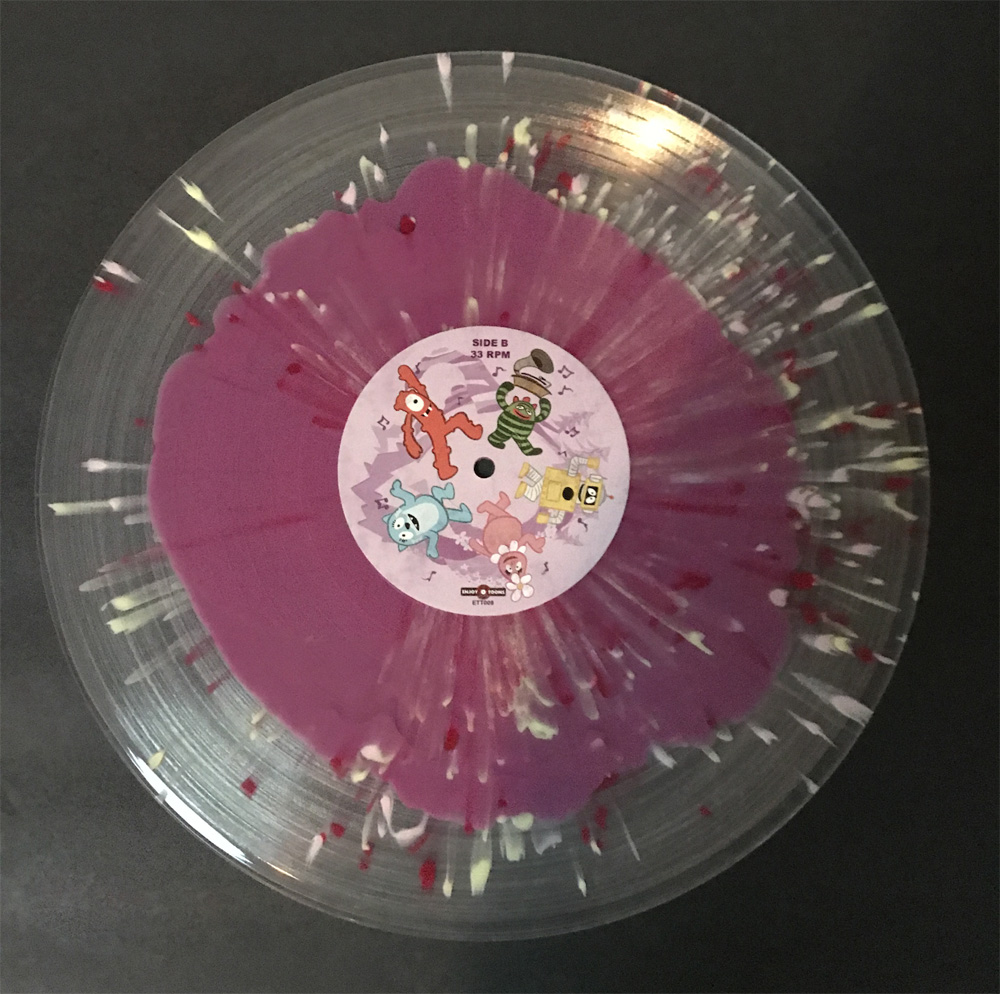 Yo Gabba Gabba! is slightly strange in that it’s been airing on Nickelodeon for a decade, but there haven’t been any new episodes since January 2015 — and those shows were actually produced in 2011. So, essentially, almost all the material Enjoy the Toons just released is in that nostalgia vein which the label so effortlessly mines for its albums.

These two vinyl releases (the first time the show’s music has been on wax since 2012) manage to cover both the majority of the show’s big musical guests — Weezer, Metric and the Shins — and the lesser-knowns such as CSS and The Apples in Stereo. One release even fits in a DJ Lance Rock cut (“DJ Lance Says” on Yo Gabba Gabba! Hey!), while the other includes a Biz Markie song (the amazing “Pancakes & Syrup” on Fantastic Voyages), but these aren’t strictly kids records. There’s no “Party in My Tummy” and there’s a single Biz Markie “Beat of the Day” (at the end of Yo Gabba Gabba! Hey!).

Think of them more as all-ages appropriate. All tracks were culled from the show itself, and even the very kid-friendly “Pool Party!” by the Aquabats was rewritten to be completely clean. You can look at each LP as being somewhat thematically different, because while they’re both pretty dancey-pants, Yo Gabba Gabba! Hey! is a little more rocking and Fantastic Voyages is more pure pop. The former has the likes of Rocket from the Crypt, Taking Back Sunday, Jimmy Eat World and Weezer on it. Also, while it does have Devo’s “Watch Us Work It” and the skank-worthy, excellent “Pick It Up” by GOG013, Yo Gabba Gabba! Hey! Is completely out-danced by Fantastic Voyages’ inclusion of the Faint, Chromeo and MGMT.

Both Yo Gabba Gabba! LPs are exactly the sort of records to throw on for a dance party or a joyous mini-party, whether you have kids or not. Kids’ records, even those for the whole family, can run the risk of turning into earworms you’re incapable of removing, to the point of frustration and irritation, but the majority of the artists here are just dropping out the objectionable content and language from their songs and just doing what they normally do, musically.

The Faint’s probably best known for songs about sexual frustration, yet somehow manage to contribute a track about how important school is. Of Montreal has a song in their catalog called “Heimdalsgate Like a Promethean Curse,” but here contribute a song called “Brush Brush Brush.” And they’re both good! All the songs are good. Even compilations which I mostly enjoy, like the Bloodshot Records kid album, The Bottle Let Me Down: Songs for Bumpy Wagon Rides, have their really irritating moments, but Enjoy the Toons has really culled together two LPs worth of songs which work not just as great kids music, but pretty amazing pop compilations, as well.

The sound quality is pretty good overall, although the Aquabats’ “Pool Party” sounds awfully tinny. For the most part, though, it’s a solid recording. Nothing is particularly out there in terms of sonic experimentation — there’s no crazy phasing or loud-quiet-loud dynamics, essentially — so both LPs sound nice. I would like to single out Peter Bjorn & John’s “I Wish I Was a Spy” for sounding warm and amazing, though.

Our copy of Fantastic Voyages came pressed on mountain purple inside clear vinyl, with pink, yellow, and red splatter, while Yo Gabba Gabba! Hey! is on “Muno-themed vinyl,” which is clear red wax with solid red splatter and a variant-exclusive “Cyclops Eye” B-side center label. The mountain purple is gorgeous. It looks like candy inside a cartoon, lit with neon. The “Muno” variant is kind of cool — I’d actually like to see more of the transparent color with solid splatter as a thing, because it’s subtle, but intriguing once you notice it.

At first glance, the cover art for Fantastic Voyages is better than that for Yo Gabba Gabba! Hey!, because the latter just has an empty stage, while the former features all five characters rather largely. However, when you open up Yo Gabba Gabba! Hey!, there’s a sheet of reusable stickers, allowing you to create your own custom cover. How cool is that? Definitely kid-friendly.

The rear cover art for Yo Gabba Gabba! Hey! is a little better than that of Fantastic Voyages, too: it looks like a handwritten, doodled-on notebook paper setlist, whereas the other is just plain text with outlines on top of a faded background from the show. It looks like a lazy Photoshop job.

We also got the bonus web exclusive, which is a 24” x 12” double-sided playset insert that you receive if you purchase both Yo Gabba Gabba albums direct from the label webstore. The playset insert is a poster, consisting of four of the YGG character lands from the show. You can use it with the repealable stickers that are included inside the Yo Gabba Gabba! Hey! release (if you have any you’re not using to customize the stage on the cover of the jacket, that is).

Both Yo Gabba Gabba! Hey! and Fantastic Voyages are available on vinyl from Enjoy the Toons Records.