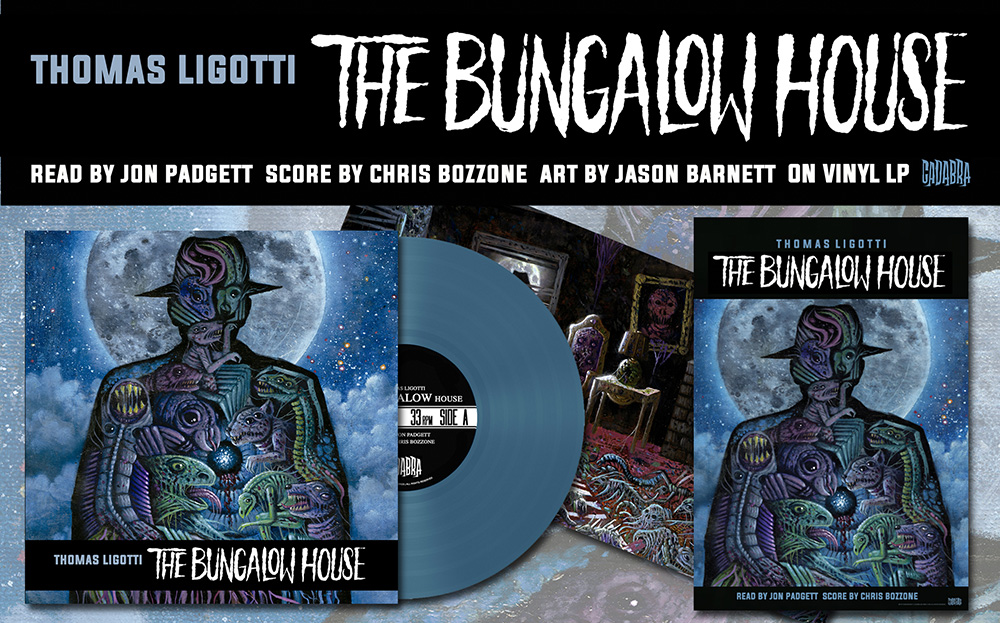 Spoken-arts label Cadabra Records are set to release The Bungalow House, a story by modern horror writer Thomas Ligotti, which is being read by Jon Padgett and scored by Chris Bozzone. The story is ripe for this kind of audio treatment; in the sample below, Padgett’s voice is heavily modulated to mimic the sound of a well-worn cassette tape, while Bozzone layers light guitar and drones to drive the narrative. Cadabra are traditionally well known for their excellent Lovecraft adaptations, but Ligotti’s use of modern dialogue definitely gives them some room to stretch out.

Listen to the clip below, then read on for more details. The Bungalow House goes on sale Tuesday at noon EST on Cadabra Records.

Thomas Ligotti (b. 1953) is an American author who is widely considered to be one of the most important living writers of horror fiction. His work is characterized by a distinctively bleak and dark philosophical vision, pitching over into outright nihilism, that remains strikingly original even as it draws on a rich set of literary influences that includes the likes of H. P. Lovecraft, Edgar Allan Poe, Bruno Schulz, William Burroughs, E. M. Cioran, and Vladimir Nabokov. His short fiction collections include Songs of a Dead Dreamer, Grimscribe, Noctuary, The Nightmare Factory, and Teatro Grottesco. He is also the author of the short novel My Work Is Not Yet Done and the nonfiction work The Conspiracy against the Human Race. He has won multiple Bram Stoker Awards, British Fantasy Awards, and World Fantasy Awards. In 2015 Songs of a Dead Dreamer and Grimscribe were published in a single-volume Penguin Classics edition, making Ligotti one of ten living authors to be included in that distinguished series.

The Bungalow House will be released on colored 150-gram vinyl, as well as a special edition (limited to 120) that features a bonus cassette tape. Sales begin on Jan 23 at noon EST.