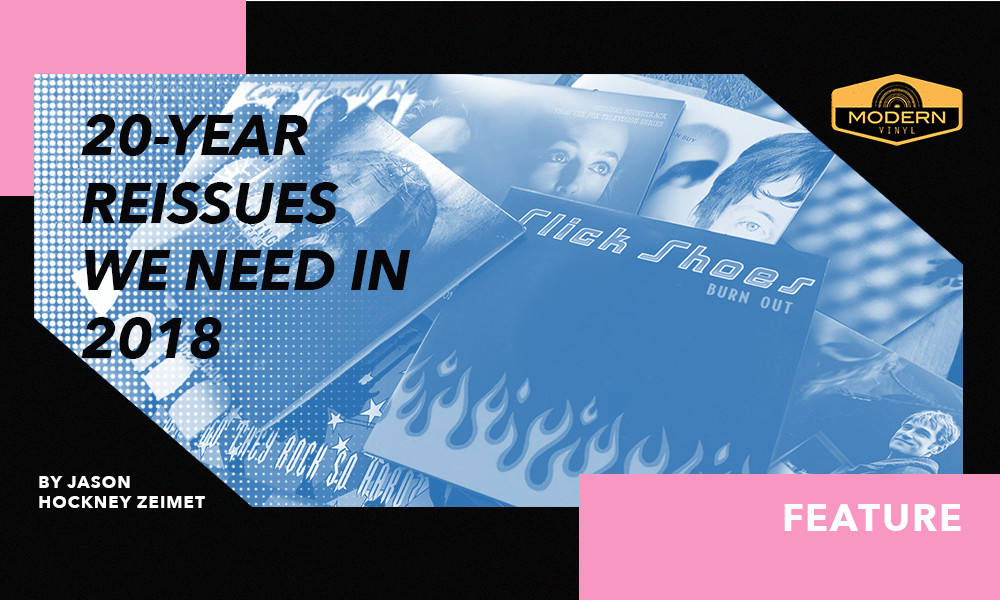 Twenty years ago, in gloriously-confused 1998, “Boy/Girl Pop Bands” ascended to even higher heights than NKOTB ever dared imagine. Woof. Ushering in 2018 means rehashing a reader-favorite, annual tradition here at Modern Vinyl, where we’ve averaged about a 65 percent prediction-accuracy-rate for anniversary vinyl releases.

So, without further ado: “Which albums from 1998 REALLY need a vinyl pressing this year?”

Listen. If there’s a single song that defines the late ’90s better than “Closing Time,” I haven’t found it (and trust me, you are talking to an expert). If you ever want to have your own “’90s Nite,” you just won’t execute a flawless set without this record as your last call song (okay.. you might convince me with Limp Bizkit’s “Break Stuff”). Simply put, there is no album from 1998 that needs a vinyl treatment more than this one.

Few comedies captured the awkward, embarrassing musical diversity of ’90s high school life better than Can’t Hardly Wait. Unlike most adolescent RomComs of the era, every single lead in the film manages to pull off a strange sort of audience sympathy. And as with every single teenage-centric PG-13 movie since Pretty In Pink, it was clear that the music supervisors of this film were being handed piles of cash by record labels for “strategically placed new band plugs,” thus rendering it forever-glistening with that “distinct, ’90s patina.” But hey, if I’m really being honest, most ’90s nostalgia really just boils down to successfully-executed product placement. Product placed here includes Third Eye Blind, Guns N’ Roses, Smash Mouth and of course, The Replacements.

It’s funny that the most popular bands of the notorious “3rd Wave of Ska” almost unanimously destroyed the genre they’d made popular. Think about it, No Doubt made Return to Saturn, The Mighty Mighty Bosstones made Pay Attention, Sublime lost Bradley Nowell, and Reel Big Fish made this confusingly-anti-upstroke-centric, rock-with-horns record. Still, RBF’s approach to trying to be the next Huey Lewis & The News or Chicago was probably a considerate one. The “1997 Summer of Ska” had already died a necessary and timely death, with or without anyone’s permission.

There could be different votes cast for many varying skate punk bands in a “most technically-proficient” contest (No Use for a Name, Hi Standard, Strung Out), but none would argue that Slick Shoes earned a solid reputation in the scene. The lightning-fast guitar work and nearly mechanical deftness of the drumming on this record left every single punker’s pierce-lipped jaw on the floor. Their recent reunion shows have left both new and nostalgic fans giving unanimously rave reviews. The art for this record is also so iconic that it would only be served a proper tribute when represented by a 12 inch circle made of plastic.

5. Fastball – All The Pain Money Can Buy

In the receding years of the angry, apathetic ’90s, there was an upswell of “soft, adult alternative,” meant to appease the grungy teenagers who had finally grown up and were all trying to make peace with their dads. I like to imagine this symbolic reunion taking place at a Fastball/Train/Everclear show. Sure, “Out of My Head” was like, the diet soda of music, but we can’t just keep drinking Jones Soda forever, right?

Before the “only San Diego punk band” gave music an Enema in 1999, there were a bunch of mid-range bands, who sounded punk, from Southern California, who also sang songs about aliens and suicide. Unwritten Law were just one of those bands. Flipping a “who’s famous next” coin, they lost (well, sort of…they more or less went “best two out of three” and got us all “Seein’ Red” in the early oughts), but many from the scene remember UL’s black clothes and Scotty’s “not sorry,” sleazy-charisma during the self-titled era. Also, Cailin Russo, daughter of UL’s singer Scotty, and of the song’s namesake, has like, 500K more followers on Twitter than the actual band does, so all she needs to do is give it one plug, and it would sell out.

Ah yes…the old “Let’s take a spooky TV show and put some techno music behind the theme song” trick. Also, R.E.M. and Screamin’ Jay Hawkins and P.M. Dawn? What?! WHAT?! Who cares? The show is back on TV, and that RSD release list ain’t gonna bloat itself without Space Jammy titles like this one.

2 Skinnee J’s were probably one of the earliest “Nerdcore-Rap” incarnations out there. Think Bloodhound Gang, with a better vocabulary, and a denser knowledge of the pop culture zeitgeist of the time. Without the minor, ’90s infant-success of bands like 2SJ, I have a hard time imagining a future world that became willing to embrace 3OH3!

Another year passes us by, and there remains a conspicuous absence of any Stabbing Westward on vinyl. Perhaps it was their decided-lack of the constant 808-drop bass guitar tone which characterized the Nu-Metal bands quickly gaining traction around this time, but Stabbing always seemed just a bit late to everything. Hopefully not the “vinyl repress game.”

A longstanding, singer songwriting icon, David Gray’s debut may have featured many “play it safe” adult contemporary hits like “Babylon,” but his versatility as a songwriter has allowed for him to have an enduring, respected career. Sometimes, I think that records like this were literally invented for Barnes & Noble to keep having SOMETHING to churn out as a vinyl-exclusive.

Shortly before Marilyn Manson became the unfairly credited “symbol of American youth gone wrong,” the group was busy defying and defiling every musical and visual construct future-millennials would ever recognize. Bored with simply attacking the religious right, Mechanical Animals took severe, aberrant steps to challenging everything from gender identity norms to violence in media. All of this brilliance became egregiously overshadowed the following year with the introduction of “media-mass-shooting-scapegoating.” Regardless, this record is brilliantly horrifying, and it’s about time music historians dealt with it outside of the shadow that was unfairly cast upon it.

2. MxPx — Slowly Going the Way of the Buffalo

One of the most blistering, legendary albums in skate punk history has been stuck in $100+, “Japanese-import-only” status for vinyl collectors for two decades now. Will 2018 be the year this changes? If I have anything to say in the matter, the answer is, “We’ll throw this record on the turntable at the Party at my house, Be There.”

There are lots and lots of hits on Version 2.0, and they’ve maintained a still-diehard fanbase. Meanwhile, Shirley Manson remains a noteworthy example for the early prototypes for our modern day “art rock” female music icons (familiarities range anywhere from St. Vincent to Lady Gaga). I am getting the sneaking feeling that 2018 is going to be a “garbage year.”

You can make the argument all you want that this record has “never received an official release on vinyl,” and you won’t be wrong. I can also make the argument that the bootleg copy I have sitting on my Stanton at this very moment blasting “WAR?” sounds just lovely, and I won’t be wrong. Let’s just cut the confusion, cut the legs out from the European bootleg vinyl market, and get this band’s discography a worthy reissue campaign, shall we?

HUM are often credited as being among “the founding fathers of Shoegaze,” which may or may not mean anything to most people. Still, it would be nice to not have to scour the shelves of indie record stores for the next two decades looking for an original, half molded pressing of this record. SRC Vinyl did an epic job with You’d Prefer To Be An Astronaut, so let’s hope they continue the fine work.

One of the most legendary animated film/series/whatever soundtracks of all time, The Seatbelt’s busy jazz cacophony was utterly-revolutionizing for the genre, and as they say, “often imitated, never replicated.” There is a CB unofficial/bootleg European vinyl release for just the first episode, but diehard musicians/vinyl nerds/comic nerds/anime nerds/nerd nerds want to see the whole thing done up HUGGGGGEE and complete.

Maybe not a wholly fantastic alternative album, and maybe not as worthy of a vinyl release as, say, a “Greatest Hits” comp would be, but “Shimmer” and “Sunburn” are pretty special songs, for sure. It’d be hard to imagine this one never seeing the light of day (other than the $60-$100, “promo only” first pressing copies).

Remember Nu-Metal? Well, over in Sweden in 1998, these guys and their fans found the idea laughable. This record is a blistering, thrash metal reminder to the Korn and Limp Bizkits of the world of “what heavy music was still capable of.” Diehard Messhugah fans consider this album to be sacred ground, with the median price on Discogs averaging $250 for the limited-to-333 copies, only pressing from 2007; but many Nu Metal fans have recently gone back and are beginning to just now recognize their ignorance and folly during a Follow The Leader-era.

The legacy of Layne Staley-era Alice in Chains was perhaps more riddled with misery than any of the Seattle grunge bands. Many felt in 1998 that by Jerry Cantrell taking on this solo endeavor, he was finally given free reign to exercise his chops as a prolific songwriter, who’d previously “just happened upon” a man with a golden voice in Layne. But the Alice in Chains diehards gave the record a hard time, while critics praised it. Now that the notion of Cantrell & AIC has become much more than “just one singer in one time period,” it is a perfect time to revisit this overlooked bit of genius.

UNKLE was the “foundation of Trip Hop” collaboration between DJ Shadow and James Lavalle, featuring guest performances from such diverse vocals as Radiohead’s Thom Yorke and Beastie Boys’ Mike D. In 2013, James Lavalle created a Kickstarter campaign incentive for backers to purchase an expanded, vinyl “Ultimate Edition” of Psyence Fiction with bonus songs, demos, and a 7″….but this has yet to come to fruition for fans. Given its status as being such a groundbreaking album, it would really be fantastic for a truly quality-driven collective/reissue label to get a hold of it, and finally see it released…please, Vinyl Me, Please?!

Thanks, and debate on…what do YOU think deserves a pressing that came out in ‘98?