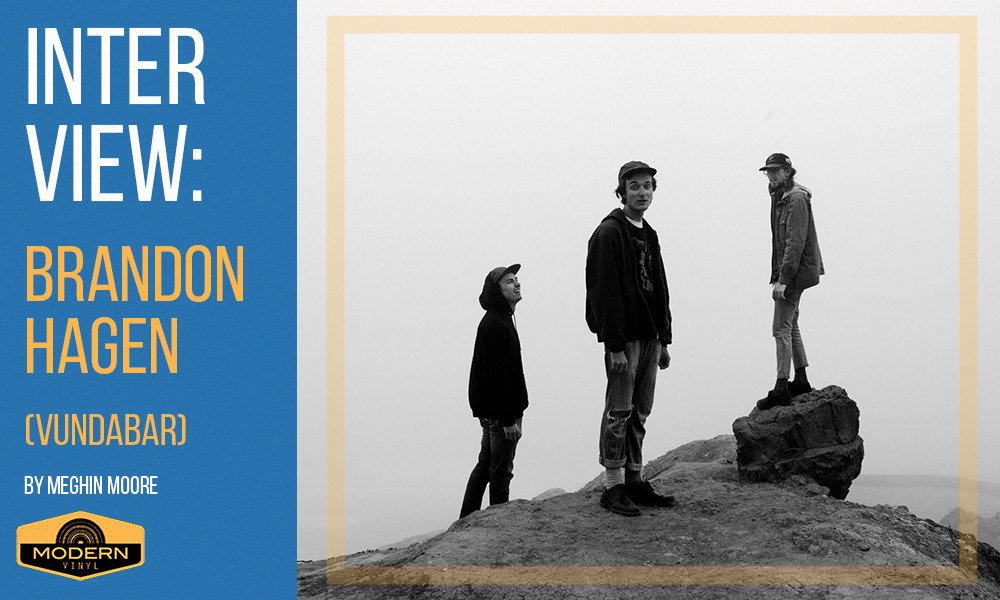 The “sludgy, jangly, jolly fellows” of Boston’s Vundabar recently released Smell Smoke, the band’s third full length album. The album’s themes skew deeply dark, giving a glimpse of what it means to be vulnerable while dealing with grief. Those glimpses come based off of songwriter Brandon Hagen’s personal experiences caring for a loved one who was physically and mentally declining from 2014-2017.

We spoke with Hagen about the album, being able to put feelings from the past four years into words, and their new relationship with Citrus City Records.

Modern Vinyl: To start out, could you give us a brief introduction about yourself, and how Vundabar got its start?

Brandon Hagen: My name’s Brandon. I sing and play guitar in the pop outfit Vundabar. I like a good bowl of noodles, a stroll in the park and a laugh with a friend.

Vundabar started when Drew [McDonald] and I were next door neighbors in high school. Our dads tried to set us up, but it didn’t work. Once they gave up, we thawed to each other a bit and started playing together soon thereafter.

MV: “Smell Smoke” is the third album you’ve released. What did you do differently with the approach towards this album than others you’ve put out?

BH: For Smell Smoke, we had some money saved to allow some room to breathe in the studio, relative to previous albums (Gawk was recorded in three days); we could explore with that extra time. Additionally, the compositions and most lyrics were finished, but the arrangements were undecided, so most of the instrumentation was written as we went. I’m someone who needs that kind of pressure to get things together, otherwise I tend to dawdle. I think throwing ourselves in allowed for spontaneity on the record and some new sounds to arise. We got synth, we got shaker, we got percussion, we got doubled drums, all this and more.

MV: When working in your songwriting process, how were you able to manifest your feelings regarding a loved one’s declining health/mental health into something cohesive?

BH: It finally started working once I had allowed myself the time I needed to gain an understanding of the situation and subsequently allow myself to reflect honestly while writing. I was afraid to confront it for a few years and did my best to sidestep the issue by way of relentless touring, work, etc.; basically anything to outrun the weight of this looming dark. After a while, I found that I’d accumulated a massive debt of unresolved feelings, and I needed to confront these things or certain cycles I was seeing in this individual [that] would repeat themselves with me. The record was challenging to make, but once I was able to accept my situation instead of trying to repress it, things started to work again.

MV: Was there anything that helped you out with your mental health while working on this album and dealing with what life was throwing at you?

BH: That’s always gone in waves for me, but I was lucky to have a supportive and patient circle of folks around me once I was willing to accept their support. The record itself helped me in a lot of ways; I was able to parse the thing out into smaller pieces. It allowed me to break it down a bit and make it manageable.

MV: Looking back, is there anything you would’ve done differently in regards to the grieving process you ultimately ended up going through?

BH: Hard to say, it’s one of those things, without the experience I wouldn’t have the foresight, so who knows.

MV: If somebody had asked you on how to deal with loss, what advice would you give them, knowing that everyone’s got a different way of dealing with things?

BH: Yoof, no advice to give. Still a work in progress. Take up jogging or painting by numbers?

MV: Let’s switch over to the album’s distribution for a bit. You’re releasing a limited number of tapes through Citrus City Records. How did you end up hooking up with them, and why were they the best fit for the album’s tape release?

BH: Manny’s a friend and has been supportive of us, and tons of other great groups for quite a while, so it just fell into place. Distribution has unfortunately always been an afterthought for us; running our own label does have some limits, so it’s nice to have Manny working that end. Now we’ve got tapes in Japan!

MV: Looking ahead to your spring and summer, what are you most looking forward to when you hit the road?

BH: Putting the nose to the grindstone, working the record, shaking the hands, topping the charts. We’ll be visiting some new places too, which is always nice.

Smell Smoke is available now via the band’s Bandcamp page, both as a digital download and as a physical 12″ record. Tape pre-orders from Citrus City Records are up now, limited to 100 silver tinted tapes. Fifty of the tapes are out with the band on tour now, 15 are up for grabs on Citrus City’s bandcamp, and 35 will be sent all around the world to various distribution shops…including Japan!

The band is currently on tour with Ratboys.