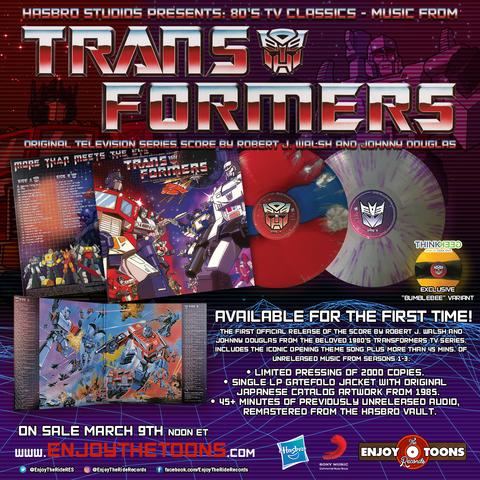 Enjoy The Toons Records is teaming up with Sony Music for the release of Hasbro Studios Presents ’80s TV Classics: Music from The Transformers. This will be the “first official release of the score in any format and includes 45 minutes of unreleased music including the iconic opening theme song and more by composers Robert J. Walsh and Johnny Douglas.” It features music from seasons 1-3.

The album features music from seasons 1-3 of The Transformersanimated series, which debuted in 1984.
There will be several vinyl variants, including “Optimus Prime” (blue and red stripe with grey splatter), “Bumblebee” (black and yellow stripe), and “Megatron” (grey with purple splatter). Enjoy The Toons will have the exclusive on both Prime and Mega.