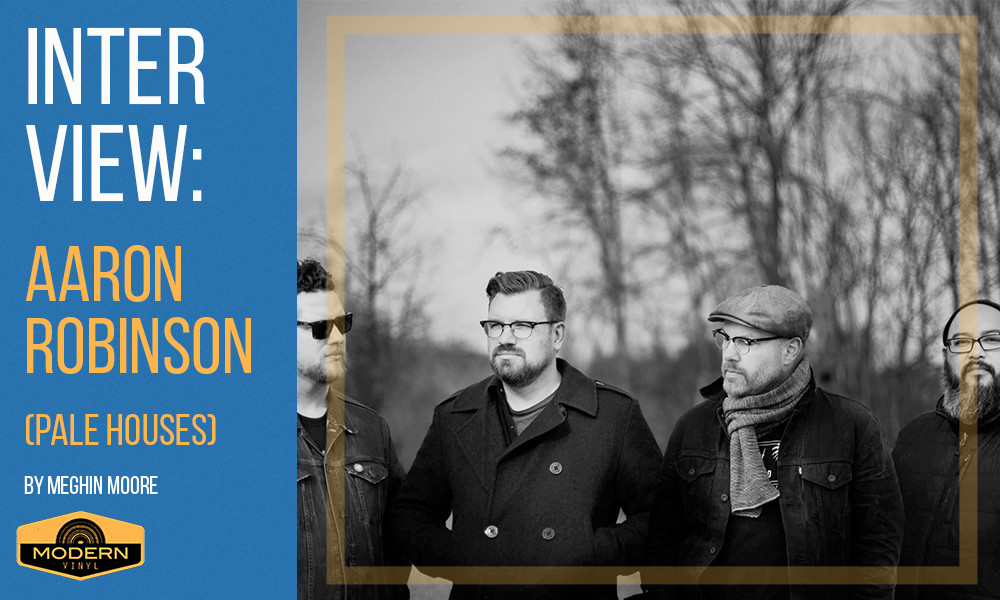 Pale Houses are ready to stage a huge comeback in 2018, starting with the release for Songs of the Isolation, their first EP since 2013. Vocalist Aaron Robinson talked with Modern Vinyl regarding what they’ve been up to during the hiatus, details on Songs of the Isolation‘s conception, “the Nashville sound,” and much more.

You can check out their latest single, “The Ocean Bed,” below.

Modern Vinyl: You haven’t been active in a while, and it’s great to see 2018 as somewhat of a “comeback year” for you. What have you been doing in the time that you’ve been relatively quiet?

Aaron Robinson: It actually feels a bit more like an arrival than a comeback. At risk of further unleashing the “dad rock” label upon us, we’ve been quietly procreating with great success in our public absence. Since our debut EP was released, 75% of us have started families, bringing the total families represented in the band to four; one per member. So, all that stuff definitely impacted the delay as well as the promo approach to the first EP. So, it really feels like we are launching as a new band right now.

MV: To go off of that, could you give more insight about the “new beginnings“?

AR: I think at this stage of life, we are just consciously recommitting to being recording artists, a live band, and part of the musical community. We think we have something different to offer in Nashville and beyond, so a new beginning is a more flowery way of proclaiming a renewed focus.

MV: How was “Songs of the Isolation” conceived?

AR: Funny, many of the skeletons of these songs were established in one rehearsal. We have a bit of an unorthodox writing and rehearsing process since our drummer Ryan [Rayborn] lives out of state. When we are in writing mode, we throw a lot against the wall in one or two rehearsals, and then work on stuff that sticks in between. Once we are able to reconvene, things tend to crystallize. Many of the lyrics for this record focus on what feels like a new adolescence. This stage of life — for me at least — is full of its own unique awkwardness and self-doubt, longing and need for escape, and so many of the same things that inspire one to write in their more tumultuous youth. As we refined our sound and got these songs in order, there was a real nostalgia ingrained for all of us and it solidified a direction for the recording.

MV: What was done differently with this release as opposed to previous ones?

AR: The first EP was made up of three songs I had essentially completed on my own, and only one that happened in the rehearsal space completely. This new collection of songs almost all came together with all of us in the room playing together. So it feels like the first fully realized version of Pale Houses.

MV: “Olivia and Courage” strikes me as something that I would hear on a Copeland/Sunny Day Real Estate hybrid album. What’s the story behind that song?

AR: I hadn’t thought of the comparison here, but I do love Jeremy Enigk, so I’m fine with it! The song is about grief and the role that faith plays in restoring people. The idea that those who leave us gain a wisdom and peace that guides and comforts the rest of us in their absence is something that most people really lean on to get through the worst kind of grief. I am not particularly religious, so I am amazed by the power of faith and somewhat envious of the center of gravity that it gives people. The song is also named after two real people, which I don’t take lightly. I certainly meant it as a tribute to their memory.

MV: Thematically, what were you hoping to accomplish with this particular release?

AR: I’m not sure if we were consciously thinking thematically. When you look at the songs, there is a lot of self-doubt and processing of all sorts of emotions and changes in life. That was the lyrical common denominator, I guess. Our guitarist Josh [Hood] and I are really into The Blue Nile and some obscure moody pop artists, and we were both kind of unconsciously aligning toward a specific sound and building our gear around all that. From a sound standpoint, we figured that out in between the last EP and this one, though the first EP touches on it. The sound and lyrics combined have a wistful but sad nostalgic feel which we all love.

MV: How has “the Nashville sound” worked its way into your music, while bucking the assumptions that people tend to have about what bands from Nashville should sound like?

AR: Oh it’s inevitable. The history is so rich and the roots/country element is everywhere. I think every songwriter here goes through a bit of an “Americana” phase and adopts some of those elements over the course of their journey. I think we landed on a sound that doesn’t play into many Nashville clichés. Serving the song is always paramount for us, so I suppose we do buy in to the “3 (or 4 or 5) chords and the truth” mantra. There are so many great Nashville bands making all kinds of music that it feels more inclusive and more like “Music City” now than it ever has.

MV: What advice would you give to budding musicians who might be following in your footsteps?

AR: Oh man, I have thoughts! Keep your overhead low. Live in a shack. Do anything and everything you can as early on as possible to get your music out. Play as often as you can. Play with other people. Practice constantly. Get better at your instrument outside of your usual genre/comfort zone. I find that most people who live by all that eventually end up “making it” in music on one level or another. It’s a tough industry and I think you have to be all in and eventually people will notice and you’ll stay busy.

MV: Is there any upcoming news you’d like to share about what the rest of 2018 has to offer for you?

AR: We just secured a vinyl release event for 4/20 at the High Watt in Nashville. It’s a great lineup of artists I love, including Kyle Andrews, Patrick Damphier, and Poly. We also are working on some videos, we have couple of remixes forthcoming, and we plan on booking a bunch more shows. It’s going to be an exciting “comeback” year, to use your word!

Pre-orders are live now for Songs of the Isolation over at Pale Houses’ Bandcamp page. The EP is set to be released on March 30, and physical pre-orders are also available. A limited edition 12″ is also up for grabs, shipping on or around May 10. The physical 12″ features Songs of the Isolation, as well as two bonus tracks: “Wayward Sire” and “Happy Lives,” taken from the band’s self-titled EP. It’s limited to 200 copies, and can be pre-ordered here.