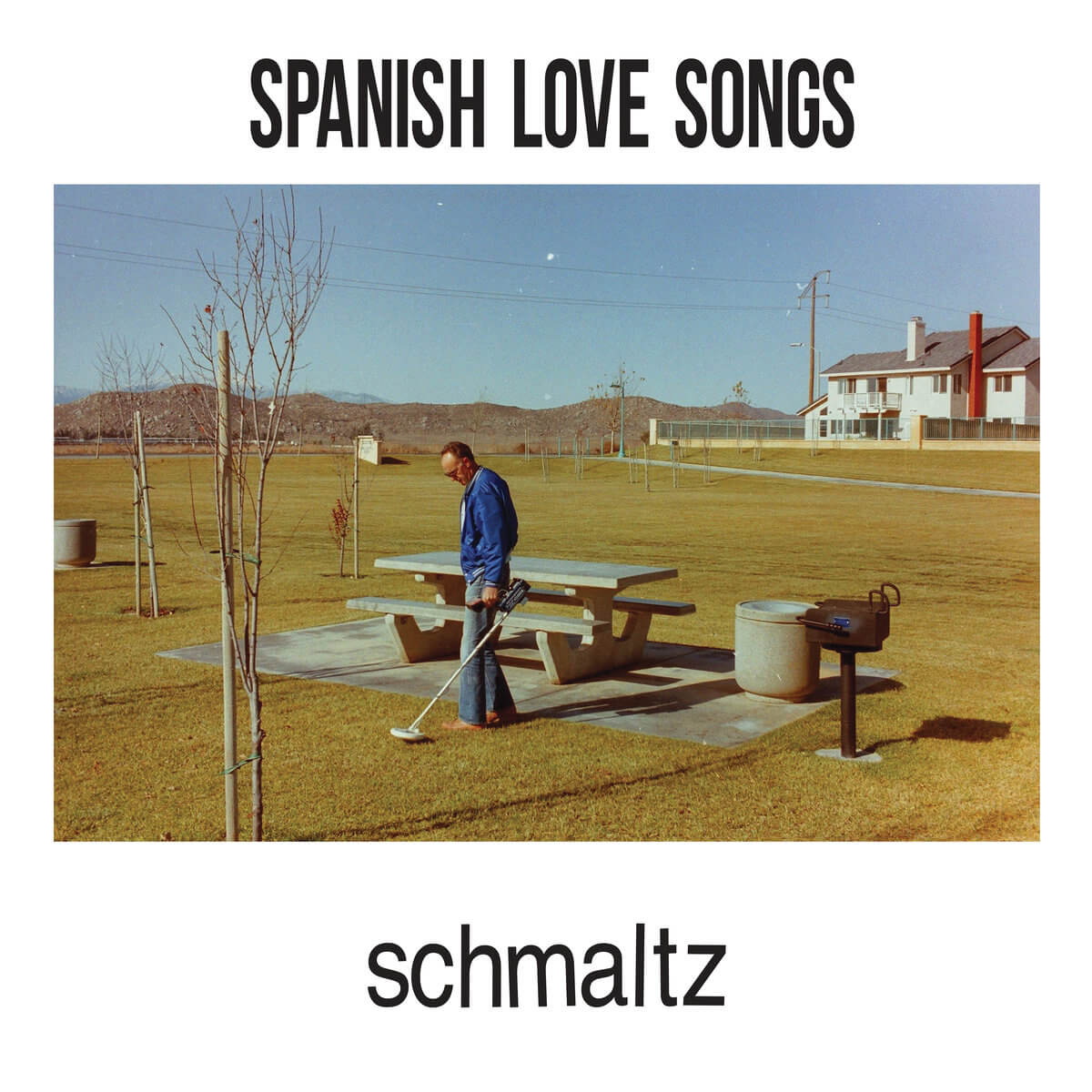 Tracklisted takes on two forms. It either presents a collection of songs under a selected theme, or allows a visiting artist to detail the influences relating to recent work. Click on the provided videos and listen to this week’s arrangement while you read a few words about the selections.

Los Angeles five-piece Spanish Love Songs tackle the resilience (and thorniness) of self-awareness on their latest full-length Schmaltz. Recently released via A-F Records, the record has been described by vocalist/guitarist Dylan Slocum as packing “a pretty heavy dose of fun things like anxiety and guilt.” Check out his favorite songs that do the same for an inside look into what inspired this outing.

Let’s start off with a cheat answer: Patrick Stickles is a bearded wizard and “A Pot in Which to Piss” ends up being an anthem for me any time I get depressed about trying to play music for a living. It’s relentlessly bleak, but also offers a pretty blatant middle finger to detractors. “Getting drunk and sad and singing” might not mean much, but it’s what we have. “…vs The Absurd Universe” is also just a song I relate to constantly.

Bruce is my favorite songwriter, and while this isn’t my favorite song by him (“Born to Run” is a perfect song), I really connected to this one while writing the new album. It captures a feeling of nervous energy and wanting to be more than what you already are, and I love that the song just comes at you from the start with that straight drum beat. I always find myself yelling along to this, trying to feel the triumph as well. (Astute listeners will also notice a lyrical reference to this on the new album.)

The Mountain Goats — Get Lonely

I wrote most of the album while I was away in Atlanta for work, and I really struggled being away from home and a woman I had just fallen in love with. I remember wandering around Atlanta with my phone on shuffle when this came on. It wrecked me.

This song came out right as I left for Atlanta, and I it became one of my most listened to songs that year. Musically, the synths on this are great, and it definitely helped me to convince the band that we could add synths to our pop-punk band without making it cheesy. More importantly, even though it’s probably a break-up song, I think it also captures a sense of feeling lost in a way that I find heavily relatable.

This song was my #1 most listened to song that same year. It’s sparse, but manages to carry a heaviness to it that makes me jealous. It also makes me so incredibly sad. I think of the first line every time someone close to me complains about my songs being downers.

Dear You is the best Jawbreaker album. Fight me. I didn’t always love this song, but over the past few years something clicked and I just got it. It fills me with dread, especially the chorus, which manages to wrap up all my existential worries in a two-line refrain about a shellfish. I also think I’ve had a conversation with myself that reads verbatim like the first verse.

I’m an unapologetic 3EB fan, and would rank their debut as one of the greatest of all time. This three-minute freak out is so well produced, and incredibly powerful in its pop angst. When we started tracking, I played this for our guitarist/studio wizard Kyle and said I wanted our album to sound like it. He told me to buy out a year of studio time then. We did 13 days instead, and I’m happy with the results.

Other than what it means to me personally, I couldn’t begin to guess what this song is about, and that’s beautiful. Jeff Mangum writes these incredibly dense, specific, and obtuse songs, and allows the listener to bring whatever meaning they wish. It’s something I’ve always been drawn to, and it’s something I really pushed on the new album. And spoiler alert: this song bums me out in its beauty. “God is a place you will wait for the rest of your life” — come on!

For whatever reason, I hadn’t listened to a ton of Iron Chic in the past, but while we were recording I finally dug in and started really listening. It was like finding out you have a long-lost older brother or something. This song manages to put into simple, catchy words what I spent eleven songs trying to figure out.

Probably the greatest song about loss that I can think of. It came out around the time I almost lost my grandmother, a woman who helped raise me, and I remember listening to it in my car, bawling and realizing that, one-by-one, I’d have to witness the people closest to me die. While we were making the record, I started losing people a bit faster, including my grandmother. Needless to say, I listened to this a lot, and two songs on the album ended up being my attempts to write a song like this.

The Beach Boys — I Just Wasn’t Made for These Times

This might be the original emo song. It’s simply a beautiful song that captures melancholy and disillusion in a way I wish I could. A lot of our album deals with a similar feeling of ennui, and this song helped make it clear that you can be simple with a lyric if it’s painfully true. “Sometimes I feel very sad” shouldn’t work, but somehow it does.

Another band I constantly referenced for synth sounds. I also love how playful it is in its discussion of Kevin Barne’s mental state. Songs like this made me feel comfortable in trying to confront my own mental problems in our songs, instead of just writing another album of breakup songs.

Frightened Rabbit — I Wish I Was Sober

This might be the most anxiety-inducing song on this playlist for me. I had myself quite the year while writing the album, and this pretty accurately describes what that feels like.

Owen — One of These Days

This song has been in constant rotation since 2006, and I never get tired of it, even though the older I get the more it bums me out. I suppose it should be an uplifting song about living in delusion as an artist, but when I listen I get anxious that I’ll “give in to the man” too late and curse myself for being an idiot for so many years. I also wish I could play guitar as cool as Mike Kinsella does.

All of us in the band don’t really listen to the same things, but I think 4/5 of us love the National, and my stated goal in writing the album was to make something as cool and meaningful as our favorite National albums, but with pop-punk songs. This song might be my favorite from them: it’s straightforward and heavy. Lyrically, I can’t think of many songs that do a better job of capturing what it feels like to live with depression.

“I just want to be good at something I like, at something I might wake up for,” will forever be one of my favorite lyrics. I spent my entire twenties feeling aimless and fearing being mediocre at the things I actually enjoyed. A lot of our album is about that, and this song was always in the back of my head.

A bonus track: this song came out after we had finished the album, but holy shit, I wish I had this years ago. As someone who’s constantly telling himself “I’m going crazy,” this song is a perfect anthem to shout along to in order to not feel alone. 10/10 would kill someone to have written this song. And if you don’t listen to The Homeless Gospel Choir, quit fuckin’ up and go listen to Normal, which was the best album of 2017.

Schmaltz is available digitally and on vinyl via A-F Records and the UK via Uncle M Records.