The Dominic Angelella Stereophonic Universe: ‘Road Movie’ and Beyond 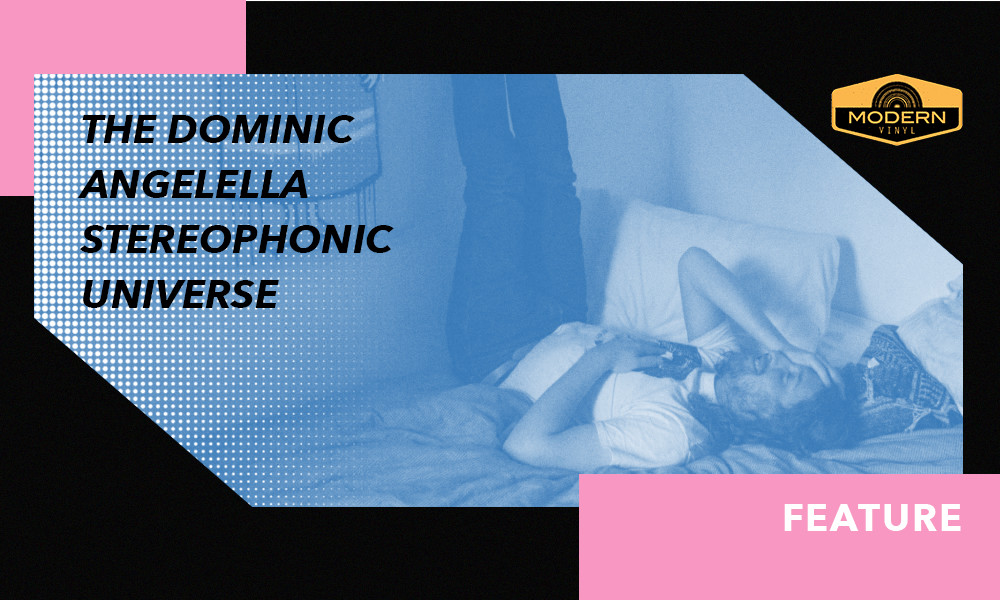 When I catch up with Dominic Angelella, we’re both in Philadelphia — just in different neighborhoods. He had just left a showing of Avengers: Infinity War and entered his room in Fishtown. “I really need to clean it,” he admits to me with a laugh. “But it’s my first day off in a long time. I’m trying to do nothing. It feels nice.” Later in our conversation, that day off would turn into another productive rehearsal day for his upcoming tour with Lucy Dacus. “I have to learn ‘Night Shift’ as soon as we get off the phone,” Angelella explains. So much for doing nothing — but Dom’s creative stamina is always at war with any other impulse.

This relentless schedule is one that’s been fortified since his first full U.S. tour in 2012 with DRGN KING, his fuzzy Philly outfit featuring hip-hop producer Brent Reynolds. Since then, he’s amassed dozens of far-reaching and genre-spanning credits, for everyone from early Hop Along to Mac Miller. (To discover just a sampling of his large discography, check out the Spotify playlist we’ve curated below.) He’s also been a touring member of local legends mewithoutYou and rounded out Natalie Prass’ backing band. And the best part of all these parallel gigs? He’s eager to dive headfirst into all of it. “I consider myself more of a fan than a musician at the end of the day. Even if you’re adding to that huge river of music in such a minuscule way, at least you get to do that.” A key example of this is his admiration for his close friend Frances Quinlan, who fronts Hop Along and has lent vocals to his projects’ tracks over the years. Angelella says he’s spellbound by the band’s new record, Bark Your Head Off, Dog. The comment makes me think he forgot he played on Hop Along’s debut LP, Get Disowned. But then again maybe not, because he added that “it’s so cool to play with so many different people and write so many different types of music.”

Angelella’s newest addition to 2018’s huge river of music is Road Movie, a digital-only follow-up to last year’s Goodnight, Doggies. The EP’s recording process actually began the weekend after Doggies was released — Dom’s workflow never truly stops — and apparently already has franchise potential. “My band and I went in with Joe Reinhart and recorded four songs. I realized that I might have another record. I’ve also got all these other songs that I might put out this year. Can I just patch Road Movie and call it Road Movie 1.5?”

This iterative approach to releasing material lowers the pressure Dominic places on himself when evaluating his own work. It’s also a pattern he’s followed with Lithuania and their sophomore record White Reindeer, released quietly last year after everyone finished up their AOTY lists. (Goodnight, Doggies. was also intended to drop out of nowhere until ardent Dom supporters Lame-O Records stepped in.) Above all, it might just be his answer to watching the careers of his contemporaries develop and shift. “I remember being younger and hearing a band put out a bad record and thinking ‘well, I guess it’s over for them.’ And then I’m alive for another 10 years and this band comes back and puts out a great record and starts touring again. It’s really interesting to learn to rid yourself of that attitude: that there’s a giant mountain and everyone’s trying to claw their way to the top.”

Road Movie tackles this mountain concept by staying relaxed in its own cinematic universe. “There’s a continuum through these songs and the songs that are coming. A lot of these songs have to do with this major life change where I toured and played music very heavily. All of these songs have high and low points to them.” Lead single “Red State” underlines this thesis statement quite well, outlining the time he and the rest of mewithoutYou were detained in Russia. That couple days encapsulated what he described as a “scary and wonderful time.”

This ebb and flow continues through “One Day (I’m Going to Quit),” which despite its title is a sarcastically delivered, musically eased portrait of the artist as a jaded man. Even when Dom says “one thing they never tell you, the game is rigged,” there’s no touch of bitterness or sour tone. That’s just how the mountain is built.

Other songs, like the Quinlan-featuring “Temporary Friend,” offer advice on how to treat those present in your life 1 by way of others. “It’s about something that my friend Lucy said to me. She said there should be no more ownership in terms of relationships, which I thought was interesting. I woke up hungover on somebody’s couch and thought about what she said and that’s what spurred the whole song.” Although Angelella tells me “there’s no one way to go about friendships and relationships,” the song’s inspiration posed a welcome challenge to his own understanding.

The collection ends with “Rebecca,” inspired by another friendly conversation and important, now departed pillar in Dominic’s life. “I was in Glasgow after finishing a mewithoutYou tour. I thought about this idea from my friend Brendan: that your loved ones that die can check up on you. I thought that this would be a pretty embarrassing time for my grandmother to check up on me, even though she might be stoked that I’m doing what I’m doing.”

The song is a memory play surrounding his life with his grandmother. It begins on her porch where deer seemed to engulf the property and finishes with him remembering what it was like to watch her pass away. “The ending comes from the idea that when you die, you just float through space forever.” But just like the harsh truths exhibited earlier on Road Movie — through Russia, romantic couchsurfing, or otherwise — it’s dished out with restraint. There’s a reverence in that approach that shows Angelella’s near-decade of musical diversity came with a hefty dose of maturity.

Because Dominic has so many credits swirling in the hip-hop world, our conversation naturally drifted to his work with Kendrick and Lil B. “I was on tour with Cherry recently — we had just played a festival in Vermont — and we were talking about how fun it’s been to watch Kendrick grow up with his records. This is what I like when I can see an artist’s entire career.”

We turn to his own career, which has found him as both a session musician and burgeoning frontman. “I don’t particularly love to go back and listen to my old jams, but lately I have. I’ve been able to accept them for what they are. Maybe it would be different if I was still playing those songs, but at this point, it’s a document.” Road Movie is another entry in his stereophonic universe, vignettes of continuing to find purpose and development while never losing sight of his dream.

Any forthcoming sequel will be just as epic.

Road Movie is out now via Lame-O Records.