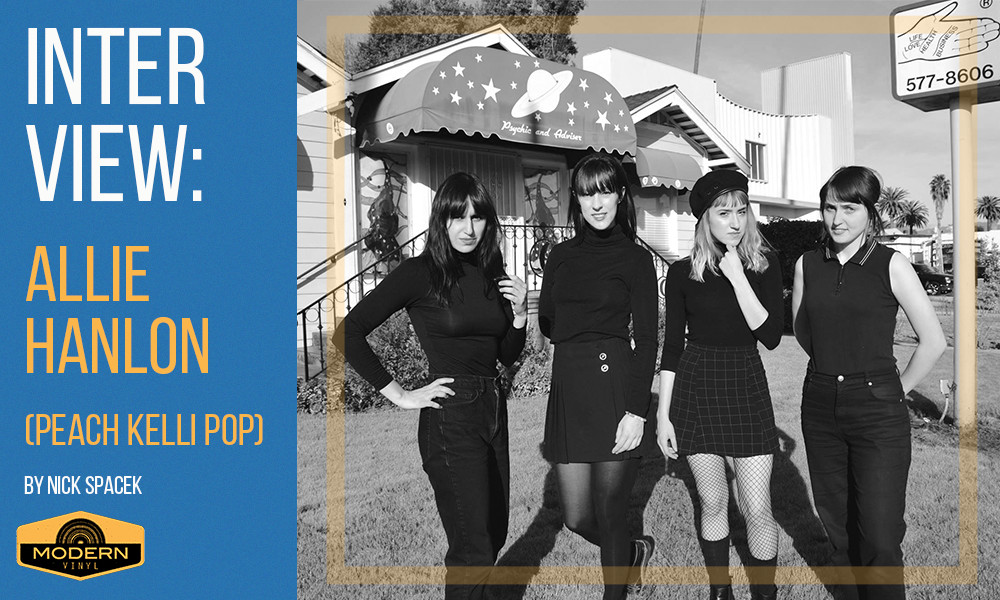 After two albums on the California label Burger Records, sunny garage-pop act Peach Kelli Pop has made a move to Vancouver’s venerable Mint Records for their fourth release, Gentle Leader. It’s not the only change: this marks the first Peach Kelli Pop album written and recorded with the inclusion of members of the touring band. On past recordings, the band’s frontwoman, Allie Hanlon, wrote all the songs and performed the majority of the instrumentation. In this spirit, the album also features cover art by Brooklyn artist Miza Coplin, dispensing with the usual shot of Hanlon.

The result is the brightest and freshest-sounding Peach Kelli Pop album yet. Gentle Leader is loaded with the requisite hooks one’s come to expect, but the songs are more diverse, demonstrated by the fuzzy opener “Hello Kitty Knife,” along with “Black Magic,” and “Don’t Push Me.” Meanwhile, the swaying beach jams “Parasomnia” and “Skylight” balance everything out, and album highlight “Black Cat 13” is a raucous romp of razor-edged guitars. Add in a cover of “Honey” by The Marine Girls and Gentle Leader is the perfect album to kick off the summer with.

We spoke by phone with Hanlon about the collaborative new album.

Modern Vinyl: How did you come to release “Gentle Leader” on Mint?

Allie Hanlon: Burger has released the last two records by Peach Kelli Pop before Gentle Leader, and when I was looking for a label for this album, I had been trying to be really intentional about it, and I was asking lots of my friends. I was actually in Canada, and I was chatting to a bunch of people there, and some of them are in bands that work with Mint, and they told me how great it was.

It was something that inspired me, and I didn’t consider, because I dunno – because I live in Los Angeles and there are a lot of labels here – but Mint is actually a great fit for Peach Kelli Pop. It’s been really great working with them, so I think it was a good choice.

MV: Being as how you’re from Ottawa, and Mint is such an iconic Canadian label, it seems that it really is a great fit for the music that you play.

AH: Yeah, I think so. When I was growing up, I was a fan of a lot of bands that played on Mint, and they’ve been around since the early ’80s and have put out a lot of really amazing albums. I was a fan of some of their earlier releases, and some of the early 2000s, and they’ve recently become pretty active again. I’ve been a fan of all their bursts of activity, and I was really happy to hear that they were active again. It’s cool.

MV: Peach Kelli Pop fits in really well alongside The Pack A.D. and The Hi-Fives.

AH: Totally. And I saw that Mint had been putting out Cub’s music again, which is cool. The girls who play in Peach Kelli Pop are all huge fans of Cub, so they were all really excited. They were like, “Oh. My. God. Mint is the label that works with Cub!”

MV: What I find really interesting about “Gentle Leader” – among many things – is that it’s the first Peach Kelli Pop record to have a title.

AH: Yes. So, the first three are kind of like a series, I guess. I was definitely at a point in life where I was like: “I wanna try something different! I want to start fresh.” Maybe shed the perception that people have about Peach Kelli Pop. Start fresh and create a new kind of album where people are maybe more open to the band and it doesn’t appear as though it’s going to be part of that former series that we put out.

MV: Is the title maybe an allusion to the fact that those previous albums were mostly you, and this one is with other people?

AH: That’s part of it. There’s not an exact story behind the title, bt I did really like the way it sounds, and I feel like, perhaps, I chose it because I was inspired by just going with the flow and letting things happen, and accepting chaos in life. Well, okay, there’s actually a story behind Gentle Leader, in that it’s something that I use when I’m training dogs [laughs]. It’s basically a type of collar that helps dogs walk well on a leash.

The dog that I have now is really big and strong and he really needs a Gentle Leader collar to help him walk and not pull like a maniac when we’re walking, so that’s what a Gentle Leader is, but it’s not exactly what I’m referring to with the album title.

Everyone that is able to should consider fostering an animal from a local rescue or shelter. It saves lives & is sooo fun. Just picked up this happy & sweet dude named ??LINUS?? from North Central Animal Shelter in LA ?

MV: Given the fact that your Instagram account has tons of dog pictures, that’s actually a pretty great story.

AH: It’s silly, and I hope people aren’t too tired of it, but that’s my life!

MV: If you’re tired of dog pictures or cat memes, you probably should get off the Internet and find something else to do. Also, kind of tangentially related to that – Peach Kelli Pop goes to Japan, like, a lot. I know you’re a fan of Sailor Moon, having covered the theme song on your last album, but how did you come to be such a Japan aficionado?

AH: I think I’ve always been attracted to the pop culture [of Japan], even as a kid. I don’t know what it is, but it’s something like…I just love the art. I love Studio Ghibli movies, which I think everyone does, and growing up, I was obsessed with Sailor Moon. I still am: I just love the way it looks and think it’s hilarious. So, I’m not really sure why, but I’ve always been really into the culture there.

I think the music that I happen to create goes over well there, too, so I think there’s some kind of connection between the music that Peach Kelli Pop creates and what I enjoy and what is naturally over there.

MV: Does it help, living in L.A., to travel over there as much as you do?

AH: It helps a lot. When I was younger and I lived in Ottawa, I would look at plane tickets and they would usually be over $2,000, and I kind of was like, “Well, I guess I’m never going there.” Then I moved here, and it’s actually cheaper to fly to Tokyo than it is to fly back home to Ottawa, where I’m from, so it’s pretty affordable to go there, which is why we go so often.

MV: Is part of the reason that this album was created more in collaboration due to the fact that the band has gelled? Like, the band is contributing live, so you also want them to contribute in the studio?

Recently, though, in the last couple years, I’ve had the same band members, and they really understand what we’re going for musically, and I also trust them to do a great job. For example, Gina [Negrini], our bass player, she did all of the bass takes on the album in one take, and that was so great for saving time.

I can play bass, but Gina’s a real bass player, and that’s the same with Sophie [Negrini], who played guitar on the album, and so it was really fun to include them and it was so much more efficient with time. I’m very happy to have a more permanent group of people that I’m playing with, who do a really great job – onstage and in the studio.

MV: Does having someone who’s an actual bassist, and someone who can knock out 10 bass tracks in 10 takes change the recording process, where you’re not just having to make it work with what you have?

AH: Yeah, yeah, yeah. I mean, I’m pretty organized when I go into the studio, because you are paying for the time, and so I would basically create demos for every song, and I would play every part. Like, I would play drums, and then I’d layer the bass over, and then the guitar, and then lead guitar, and then vocals, in progression, but having everybody master their own part — it was such a better experience.

It was really fun, and I think everybody had a good time, and I think they’re all really proud of the contributions they made on the album. I definitely hope it can happen that way again.

Gentle Leader is available on vinyl from Mint Records and Peach Kelli Pop’s Bandcamp. The album comes out Friday.