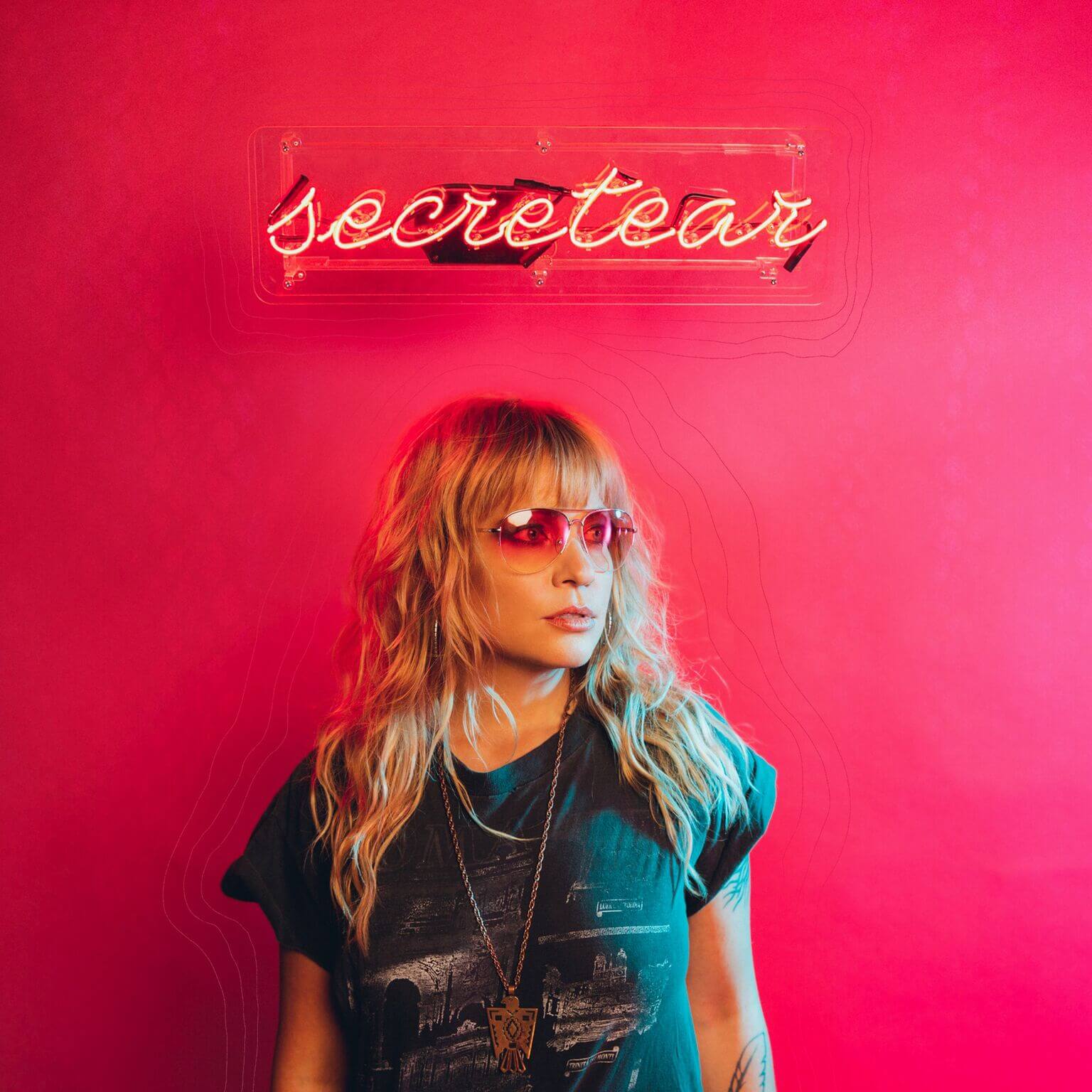 Brandy Zdan can’t turn back now. According to the singer-songwriter, “You get to a point as an artist where you have to give it your all, and I’m at that point.” That point has been marked by the “shedding” of both personal and musical past, of “the things that have held me back from being the best version of myself.” It’s in Secretear, her new full length, that she’s making that jump, available now via Tallest Man Records.

Zdan connected with Modern Vinyl to detail the tracks on that LP.

This is the oldest song on the album, as it was written while recording the last album. As soon as I wrote it I thought, “Hmmm…so this is where the sound is going?” I can never predict where the sound will go, but this definitely is inspired by my love for The Beatles, as you will hear. The Beatles were my way into rock ‘n’ roll, so it’s not surprising they are making their way into my writing finally. This was really the first of the short, tight rock/pop songs that I had begun to write. Coming in at under three minutes, we cut the third verse and ended it with the bridge. Why not? We recorded this early on in the session as it was one of the most fully formed in our minds. We tracked the drums, main guitar, and second guitar altogether. Overdubbed the vocals, synth bass, and added drums like the descending fills that go with the guitar riff. Although it sounds like a hi-hat keeping time, it’s actually a really cool metal pieced contraption that Aaron plays a lot on the record to mimic a hi-hat. It almost sounds like a triggered electronic sound. I’m a big fan of the hard tremolo on the NFC’s that end the song.

“Forget You,” “What was it, baby?,” and some other titles I can’t even remember; these are some alternate names for this song. It was a hard one to name. This is my favorite track on the record. It starts out mono then goes to stereo at the first chorus. I love that trick. It all came together when Tom Blankenship came up with his bass part. Then we added the synth on top to make the musical hook I love so much. The drums are punchy as fuck on this with some of my favorite fills that Aaron plays. The key is in their simplicity but also their tight sound. I definitely steered away from big boomy drums on this record. This song came out of a bad break-up. The last one before I got together with my husband. The fella really liked the Stones and I didn’t and still really don’t care for them (Don’t hate me!). I think that’s where the inspiration came from for that intro/turnaround guitar riff because he was playing them all the time. It’s about being convinced you know someone but you really don’t at all. Break-ups are the worst, especially when they are unexpected. But you’ve got to forgive and forget if you’re going to get anywhere.

I Want Your Trouble

The line that you hear over and over again all came from a text message my husband sent me in our time of courting. That’s all it said. What a guy. I knew it had to be a song. So I wrote it one late night at home and gave my husband 50 percent! It wouldn’t be anything without that line. Coming in at under two minutes, it might be the shortest song I’ve written and it didn’t need anything more. I tried to get my vocal take on this many times. Trouble was trying during the day. It needed some night time vibes and some whiskey and that’s just what we did.

Written on my trusty omnichord. For those who don’t know, it’s an electronic autoharp that kind of sounds like a video game soundtrack. The base beat of the song is from the omnichord and is called Rock 2. Yes, Rock 2. Writing on this instrument always brings out the “pop” writer in me. This truly is a multi-tracked song in all its glory and probably has the most tracks in one song on the whole album. It’s also the most “hi-fi” sounding tune on the album. We built this from the bottom up. Started with the beat. I tracked Omnichord and guitar and then ran with it layer by layer. It was hard to stop.

I had demoed this in a very similar way to how it turned out. I’m very proud of my swelling guitar orchestra at the end. There’s so many in there I lost count. This song was written about that turning point in the beginning of a relationship where you become venerable and real feelings appear and you can suddenly get hurt. That’s when shit gets real. I love pairing up heavy lyrics with lighthearted music.

This song has come a long way from its humble beginnings in my notebook. It morphed and shifted and was re-written time and time again. Written in a fed up, middle fingers in the air state, it’s true and raw and pretty damn honest, even from the first line. The kind of line that hopefully makes you sit up and listen. Sonically, it’s the most throwback sounding tune for me to date. I think the eight note hits combined with the spring verbs creates that feeling. I had too much fun finding the fuzzed tone for the solo in this one. I wanted to do a double of it and sent it out stereo so it hits you real hard.

P.S. I was real proud to get “shitlist” into the lyrics in the bridge.

Nashville, where I live, is the co-writing capital of the world. Many people make their living going to and from appointment to appointment everyday to try to write hits with strangers. That’s not for me, but I do like co-writing with friends and musical peeps whose music I like and respect. The beauty of collaboration and spontaneity combined is how this came to be. Teddy Morgan (producer) was writing with Jack Williams just down the street at his studio and he called me at around 11 a.m. and said: “I think the song we are writing is for you. Can you come down and help us write it?” I hopped in the car and joined in. The result was “Run Away.” A lot of times songs I co-write I don’t end up singing, let alone putting on an album, but there’s something about the collaborations with Teddy, as he knows what I like and how I like things to sound. And Jack, well, he’s just an incredible writer and character. I was just glad to be able to sing that chorus melody.

This song was cut in the opposite way of Navigator. This is a “live” feel in all its glory.

Aaron, Teddy, and I cut together and went until we had one we felt had magic. Carl and Tom overdubbed later but still managed to fit in like we had all played together.

My other favorite track on the record, and the one I am most proud of, both in my performance and as a writer. This was the first intentional song when I started writing for the album and the first one I wrote with producer Teddy Morgan. He came up with the guitar part and I took it home and wrote the lyrics and melody. If I’m remembering that correctly. Haha. Sometimes it’s hard to remember and that’s okay.

This is a deeply personal one written in a dark time when all the self-doubt and self-loathing feels were ever present. Self-acceptance is a hard one for any artist and comes up time and time again. I guess it’s all in how we deal with it and how we overcome without giving in to self-deprecating tendencies.

Ah, the songs that come all at once, how I love them so. The ones that you don’t have to work too hard for, as if the muse just speaks to you. There are a few different versions of this kicking around on the internet. See if you can find them.

This song made us work for it and it was worth it. I wrote this in response to all the narcissistic guitar playing boys I used to date and also the annoying business men you have to encounter doing this thing. We did a lot in post-production with this one, even sampled the snare sound I got from the initial demo I did in my living room on GarageBand though only the computer mic. We mixed that in with Aaron’s snare sound. Sometimes the lo-fi shit is the best and you go with it.

Another song inspired by a text message from my husband, Aaron Haynes. It is the first line of the song. This was the first love song I had written in years. And it really is just that. It’s amazing when you meet someone that finally brings that out in you again and he did. We were all really excited to get the drum sounds on this one. This is a product of Aaron playing super quiet on the drums and verbing the shit out of it. This is a song to get lost in.

Secretear is available now via all digital platforms.