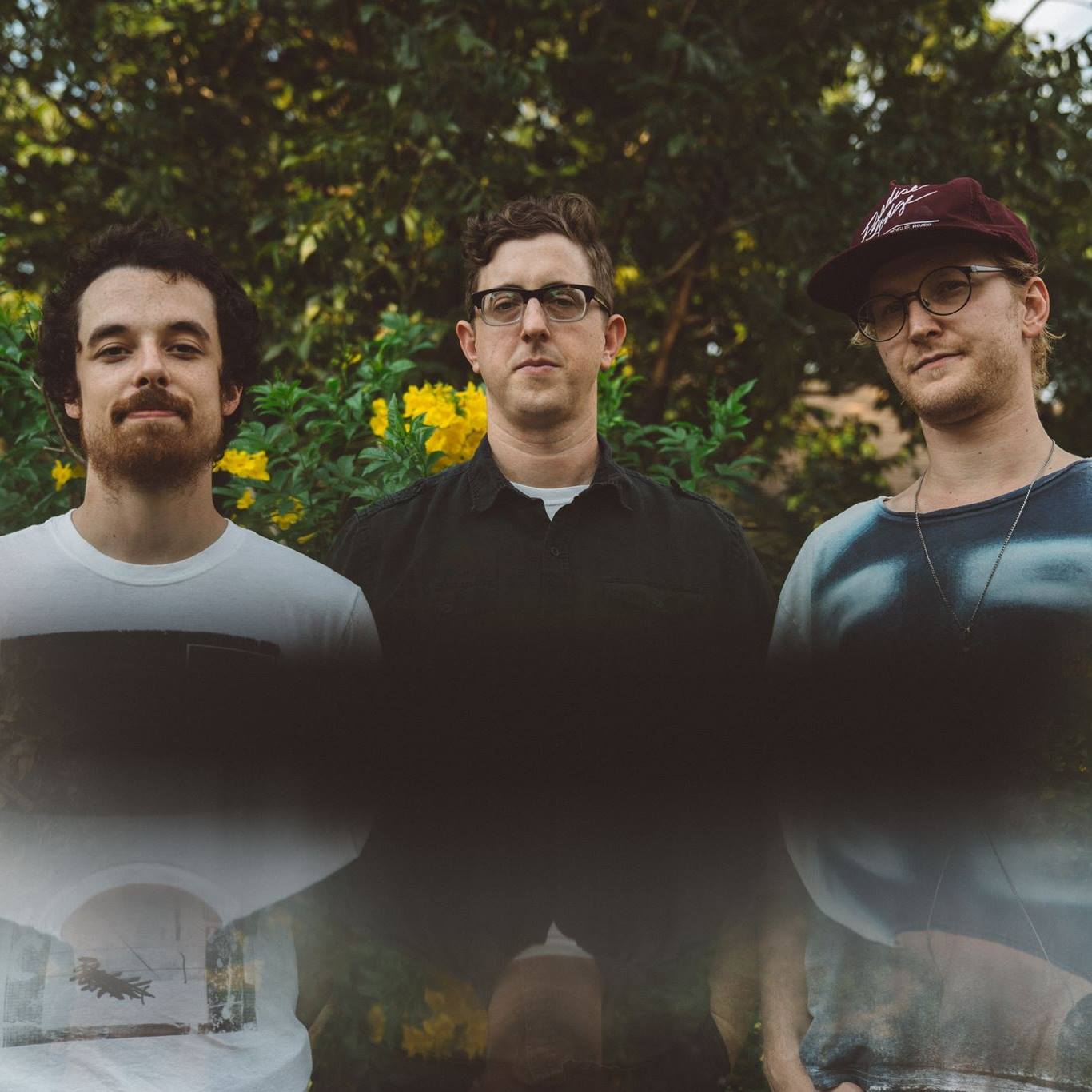 When Wade Allen moved to Austin, Texas, his friends just wanted to jam. But it took a little help from Craigslist, a brief two-year hiatus, several lineup changes and more to eventually get to Honey + Salt. In 2013, Austin Sears joined the group, immediately clicking with Allen and Danny Mee, forming a trio. Mee left the group for personal reasons in 2015, and Benjamin Sams came in to replace him on the drums. From there, it’s been smooth sailing for the new trio.

As Allen put it in a conversation with Modern Vinyl: “For all intents and purposes, it’s the final formulation. Essentially, this is the best the band has ever been, at least in our opinions…We released a full-length almost two years from April (Seams of Value). It was with our last drummer, and it was kind of a ‘let’s try to record these songs before he decides to peace out [thing].’ We put out a tape; a two-song, kind of B-side tape last year just to get Ben on the recording, because a lot of people liked his drumming.”

Following the tape, they ended up shopping their newly recorded full-length around. That’s where Spartan Records comes into the picture.

“We liked his (John Frazier’s) independent label. We liked the DIY aspect. We liked how very particular he is about the vinyl, and his whole aesthetic around putting out vinyl. We were really excited about that.”

Sears noted that an email correspondence was quickly established, and they were all impressed by how genuine Frazier was, in addition to how much he cares about the bands whose releases he helps put out.

“The fact that he’s super into music was a huge help too,” he said. “I know he used to work at Tooth and Nail and put out a bunch of records that we all grew up on; me and Ben especially. That was cool to know somebody who was a part of music that really influenced us. That was a pretty important factor for wanting to work with him.”

Allen added: “There was just a certain authenticity about him as a person and as a label. I don’t think you get that a lot anymore. Just working within the music scene…there’s sometimes a lack of authenticity, so we were really struck by John’s down-to-earth approach with us.”

The evolution of the band has been based around that music they love. “I think that the previous members were just into different kinds of music, and they were coming from more of a punk background,” Allen said. “I was coming into the band way more into math rock and stuff like that. They weren’t really into it, but we adapted a certain sound out of it. I think that with the final formulation of it now, we have a different vibe. It’s a different way that we approach music; we’re all on the same page.”

Allen makes it clear, along with praise for newer members, that he’s still friends with his former bandmates. They’re, in fact, close friends of his, and he acknowledged that they just didn’t click musically the way he and Sears do. After Sams joined the band, it just felt right. “It was the final puzzle piece in this labyrinth.”

Ben ended up playing for their EP release show, and as Sears noted, he helped bring a “completely new energy.”

The band takes a philosophical approach to things, primarily thanks to Allen’s background as a philosophy teacher. But before this career choice, in his first year of college, he ended up (of course) as a music major. Growing up in a small, South Texas town called Devine, there wasn’t a lot to do, Allen noting that it was either music or cow tipping. In that first year of college, he found himself playing trombone and tuba, but became disillusioned with it.

Ultimately, a growing obsession with philosophy formed, and he stopped playing music. In that time, he ended up getting his master’s, teaching at a community college and eventually Austin Community College.

“Teaching at the community college level gave me the time and energy to play in a band, because I’m not doing research or anything like that,” Allen explained. “I still had enough freedom to develop as a musician, especially in Austin, where I’m surrounded by amazing musicians all the time. I’m much more comfortable than I ever would’ve been in front of a crowd…For whatever reason, I don’t really think about it too much (lecturing), but I do that maybe to a fault at our shows sometimes where I talk to the crowd like I’m in class with them. Sometimes it’s great and other times it doesn’t really translate.”

While he’s not engaging in heavy academic research and writing, he does channel that knowledge into his lyrics. It gives him an outlet to express his philosophical perspectives and viewpoints, with Sears helping as the sounding board.

“He and I on tour, Ben doesn’t like this, but often I have friendly arguments about all kinds of stuff. I think that is pretty clear in a lot of the lyrical content, where I’m not trying to sound pretentious or professorial, but some of the lyrics are abstract,” Allen explained. “I think it’s cool where I can be in a band and express my outlook on life. At the same time, my bandmates are supportive and really cool with me writing about these things. By writing these things, I’m also trying to figure out my own personal values and how I look at the world. It’s a really all-encompassing thing in my life. I go to band practice and have these lyrics, and we write these songs, and I don’t see the ‘being in a band’ and ‘lyrical content’ as separate from our personal lives.”

Sears jumped in to add that the whole band are fans of pop music; music that doesn’t have the most substance to it. But, the band also loves punk bands that are politically active.

“We’re trying to walk the line between being overtly political and still having something that people want to listen to, and not feel like they’re engaging in some painful discussion.”

Allen prefers when bands have a message, but doesn’t end up judging outfits if they don’t. This caused him to muse about one of his favorites, Radiohead: “I love Radiohead, and I don’t really know what Thom Yorke is talking about rarely ever, but I love the music a lot. They’re one of my favorite bands, and his lyrics are really abstract. Sometimes they’re political, but most of the time they’re not.”

It’s something he and Sears have discussed a lot about over the years. They’ve both agreed that they feel more compelled to have a message, because “now is not the time to be neutral and not give a shit about what’s going on.” Coincidentally, that’s a major theme of their latest release. “It’s not the time to be neutral in a world that’s so charged with hate, ignorance, and terribleness,” Sears added.

As someone who specialized in ethics, Allen also thinks it’s important to be informed and engaged. He feels that Sears and Sams have done a good job of reigning him in at times when it comes to lyrical content. He quips that he used to write lyrics like a “political novella.”

“It was over the top and really gratuitous. It looked super pretentious and they’ve been really good about reigning me in in terms of my rants. We want to have a message, but we don’t want to sound arrogant like we know what’s best. We don’t want to shove it down someone’s throat. But at the same time, I don’t like the idea of ‘well, that’s just your opinion so don’t talk to me about it.’ I don’t like that attitude either. I think having rational dialogue with people you disagree with is really important.”

Nobody tends to ask Allen about his philosophical background and how it’s interwoven with his music, so the questioning threw him off a bit. As he explained, he doesn’t want to be “that guy” at parties that wants to correct everyone. Sears notes that they don’t want to be “that band,” either,  one that claim they’ve got everything figured out. As a whole, the band just wants to start conversations and have people engage in their world.

Honey + Salt’s self-titled record is available now via Spartan Records. The current pressing is out of 300, and is available in two variants: Pinwheels (coke bottle green with blue pinwheels), limited to 100, and Cascade (mint and sea blue swirl with yellow and white splatter), limited to 200.