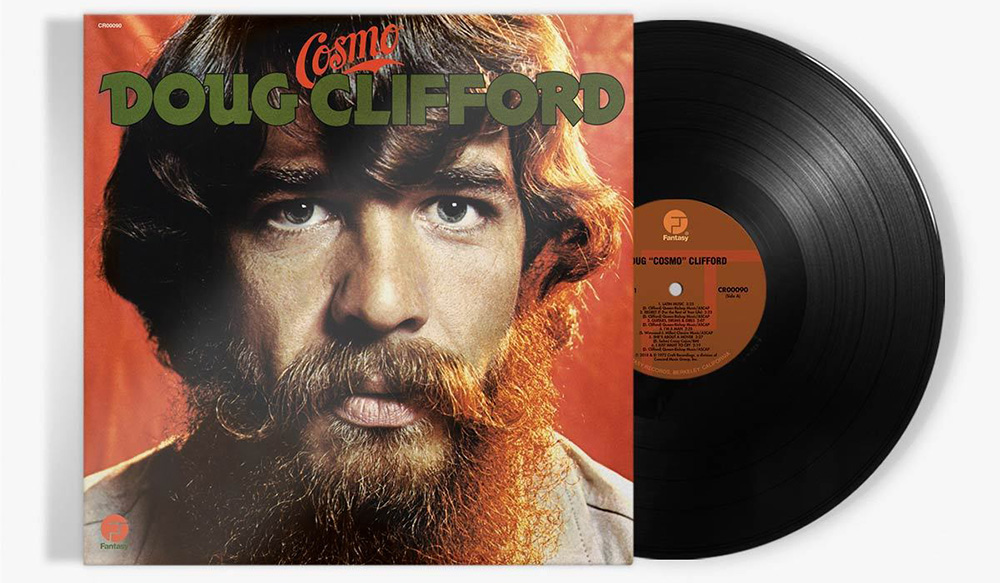 This year, Creedence Clearwater Revival celebrates its 50th anniversary. While the band would break up in 1972, the seven albums the quartet recorded have grown into classics, and their first best-of collection, Chronicle Vol. 1, has been certified platinum 10 times over. In the wake of the band’s break-up, both rhythm guitarist Tom Fogerty and drummer Doug Clifford would release solo albums. Respectively, Excalibur and Cosmo didn’t go crazy on the charts, despite Jerry Garcia on the former and Tower of Power horns on the latter, but they’ve become respected in the intervening decades.

Craft Recordings reissued both titles as part of the CCR anniversary celebration, with Excalibur cut from the original master tapes and Cosmo newly remastered by Clifford himself. Both are on heavy-duty 180-gram vinyl, and housed in old-school, tip-on jackets, while the recordings made their first-ever streaming appearances, as well.

We were lucky enough to get a few minutes on the phone with Doug Clifford to talk about the making and re-release of Cosmo, along with a discussion of the Creedence Clearwater Revival legacy.

Modern Vinyl: It’s been quite some time since “Cosmo” has been readily available. Is there a reason it’s been out-of-print for so long?

Doug Clifford: Oh, yeah. Nothing happened when it was released the first time, because it was on a label that didn’t understand rock ‘n’ roll or how to market it. Creedence was up to radio, and radio embraced us and continue to do so. But, I’ve always thought it was a pretty good record — it had some terrific musicians on it — and we got great performances from them.

There are six songs with the Tower of Power horn section, and I never got to play with one in Creedence because we were a four-piece guitar band, so it was terrific. We cut everything live, so when we had the horns playing, we were a ten-piece band.

MV: The really interesting thing, even listening to “Cosmo” on streaming, is how good it sounds. I know those Fantasy pressings are notoriously weak, so what’s it like hearing this a little more lively?

DC: Well, that was the difference, you know? I wrote the eight songs really quickly. It was a fast project. We put it together as an experiment to see if we could turn the Factory into a recording studio. We never recorded there as Creedence Clearwater Revival – we rehearsed there. The idea was that the rehearsal area, where Creedence rehearsed – the idea would be to back the [recording] truck to the back of the building, run a microphone snake into the rehearsal area, record in there, mix in the truck, and do everything in the building.

I had to throw together the project, because Fantasy gave me a budget. I wanted it to be a lively album, to be live and real, and also a mixed bag. I’ve got some country-type tracks in there, I’ve got some R&B stuff, I’ve got the “Latin Music” track – which is, I guess, latin rock you could kind of call it – it’s eclectic, basically.

We didn’t spend a lot of time rehearsing and dragging it into a place where too many people were thinking. I took suggestions. I said, “I’m open to how people want to play these songs,” and letting guys get invested and letting them participate in the project. It made it fun. I’m not a practical producer – I’m a producer and an artist, so I’m more on the side of knowing how to get the best performance out of the guys I was working with – and they’re all top pros, of course. It was fun.

MV: I’ve always enjoyed the covers on this record, and I think it’s especially wonderful that there’s a version of “She’s About A Mover” on here, considering you’d later go on to play with The Sir Douglas Quintet.

DC: Yeah, I did three albums with Doug [Sahm]. Three of them I produced, and one of them was a European – Scandanavian, to be more specific – album produced by an English guy, Kenny Denton. We had a number one single out of there called “Meet Me In Stockholm, Baby,” and of course, it was number one in Sweden (laughs). I went and toured with them and had a good time.

I love Doug. He was a crazy guy as a producer. He was really hard and had a discipline problem, but he and I came to an agreement. I wasn’t going to kiss his ass because of his talent. I loved his talent – he was the most-talented guy I ever worked with – but I wanted to get the best performance that he could [give] and not let him just stop in the middle and get stoned and not show up and do those types of things: “You have to be here on time. I want you to sound as good as you can possibly sound.”

One of the best albums I ever worked on — of course, I played on all the stuff; played drums on all the albums with Doug – was Groover’s Paradise. That’s a great record. Just a great record. Didn’t do anything, because Doug had some pretty raw, Texas-type songs: (sings) “If you could just feed the dog/And bring me another beer” – that was one of the songs.

A couple of gals were in the promotion department. Unfortunately, they put them in charge of promoting the record. They hated it. They hated Doug’s songs. It was really too bad. It was just the wrong pairing for us, and it didn’t happen, but there were some great tracks on there. I’m really proud of that record.

MV: What led to “Cosmo” getting reissued?

DC: It’s a funny thing. I had found a lot of songwriting that I had done with other guys, and I had recorded those as demos — multiple singers and multiple writers — and I was going through my vaults, and I was able to save some things and digitize them, because my album was 46 years old (laughs). It wouldn’t even play. I had to go to digital, because the tape was on its deathbed, basically.

So, I did that and I thought, “I wonder if I can get the rights back from Fantasy?” So, I called them up. This is the 50th anniversary of Creedence Clearwater Revival. That had nothing to do with me calling them up, asking to get the rights back — [so] if they had to sell it to me, what would they ask for it?

They said to me, “Funny you ask that, but two weeks ago, we decided to re-release it,” and I said, “Oh, why didn’t you tell me?” That’s something I’d have an interest it, you know (chuckles). They’re doing it as part of the 50th anniversary, ’cause Creedence didn’t leave anything in the can for them. There’s no unreleased songs or anything like that, and this album, nobody knows anything about it, except for the diehard fans from back in the day, so it’s like a new record, really.

Cosmo is available on vinyl from the Craft Recordings store.