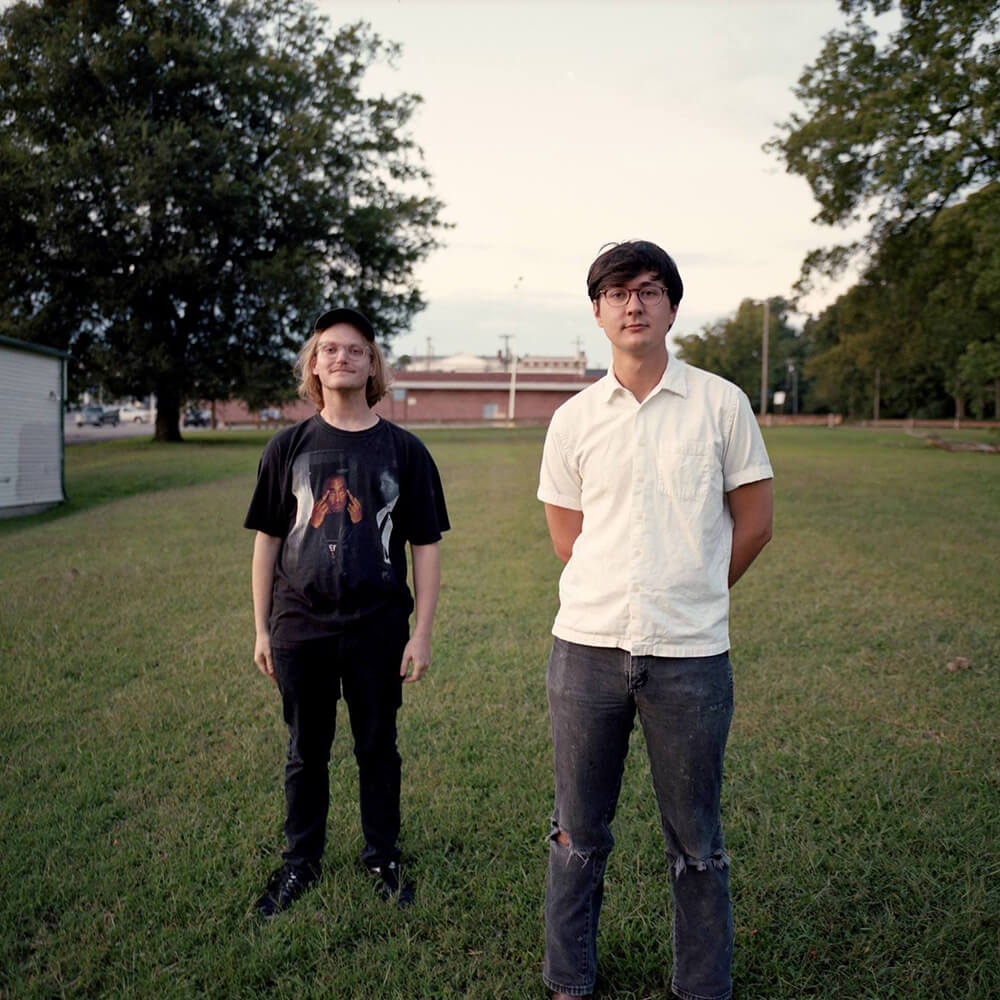 Spread out between two towns — Nashville and New Orleans — Ben Littlejohn and Dennis Sager are taking an unusual route when it comes to their music (think Postal Service’s long-range relationship).

Littlejohn and Sager send their demos back and forth via email, and work on their own music individually. And if that wasn’t far enough away from traditional construction, their latest release, Town and Country, was recorded using gear from flea markets and junk shops.

True to the spirit of their partnership, we chatted via email with both Littlejohn and Sager to get their perspective on the inner workings of remote collaboration, what it’s like playing together, and how to score some sweet gear at places people tend to overlook.

Modern Vinyl: What started the idea to collaborate via email, by sending ideas and demos back and forth?

Ben Littlejohn: It was almost a matter of convenience. I’ve played with Dennis for my entire career of playing music. The first band I ever played in, Dennis was the singer. I’ve always loved his sense of melody and felt like we had a very trusting musical relationship. I knew he had a recording set-up and couldn’t really think of a chorus to a song, so I sent him a rough mix to record to and Bent Denim was born. That song became “Periodic Table off of Epistolary.”

Dennis Sager: Yeah, it definitely was a means to convenience. We were both in school at the time and would’ve had to schedule recording sessions around holidays and families. Without the constant bouncing of ideas, the band would literally never have been sustainable. I’ve worked with Ben all my life so it all started really naturally and never really stopped.

MV: What are some of the pros and cons of doing this the way that you are?

BL: The biggest con is getting together to tour. We always have to have a day or two before a show to sit down and practice and often relearn or learn songs for the first time because we’ve never actually played them together or as a whole; just painstakingly constructed them piece by piece on a computer. That also is, in a way, a huge pro to because it’s not like we are wearing ourselves out on local bills in our respective cities. Every show is a special occasion.

DS: Yeah we are definitely lacking in the touring department. The sense of separated songwriting is very rewarding. Like if I’m burnt out on a song, trying to build a chorus or bridge, I’ll just bounce it to Ben and he’ll “save” the track, or at least stop me from hating it.

MV: Not only do you take a unique approach to songwriting and collaborating, but you also used vintage gear from flea markets and junk shops. How does one go about searching for gear in places that folks might “toss aside”?

BL: I think one of the biggest keys is persistence. Nashville has a lot of people that also look for vintage gear, so the key is to visit places often, or for situations like the flea market here, be there right when they open and survey the grounds quickly. Nowadays anyone can search something on Google and find a relative value pretty easily, so you are preying on the people who are either too lazy or too uninformed to look up the value of something.

DS: Patient is so important. Seeing the right thing at the right time and price. You have to constantly check ebay/Reverb/Craigslist for new listings.

MV: What is the most appealing thing about gear shopping at places like that?

BL: The most exciting thing about old gear is that it’s often hard to tame. Now there is more gear than ever, and small companies are getting it into more peoples’ hands. Even though I love the renaissance of smaller companies getting into the gear world, often times new gear is too predictable or too clean sounding. It can be hard to stumble onto something new in a brand new piece of gear off a shelf. Death By Audio is one of the few brands that I think breaks this exception, but for the most part new gear can be very banal. Of course, reliability and clean sound have their place in touring rigs where things need to be the same every night and need to fit in a box, but it’s not an inspiration to me.

DS: The stumble-on nature of finding things is so rewarding. Like taking a chance on a crazy old brand you’ve never heard of.

MV: Do you have any favorite shops to find gear?

BL: In Dallas there is a great store called Shake Rag. I think he finally sold it, but every trip home to Dallas is never complete until I’ve seen John (Gasperik) and checked out whatever rare or unique gear he’s gotten in his shop. There were a lot of duds around his store, but every few times I would go, I would find something I couldn’t leave without. My favorite electric guitar I found there; [it’s] an absolutely abused ’60s Fender Duo Sonic that someone stripped all of the paint off of.

DS: I bought my 3/4 size Yamaha acoustic guitar from there. And that’s probably where 75 percent of my songs get started on. We are constantly swapping ebay/Reverb/Craigslist posts about this or that. I have some friends who have been having good finds on Facebook Marketplace, but I have not been so lucky there.

MV: When you two are together, what is the chemistry like when you actually get to work in person?

BL: Very little of our creative output has been recorded together. Over New Years, we actually had a few days where we worked in New Orleans and I was surprised how wildly productive we were in those couple of days. Our next release will definitely have a few tracks from those few days. I guess it’s more or still to be determined. Dennis is moving to Nashville soon so we will know the answer soon enough.

DS: So much of what we do we do is just us at our desk alone. Songwriting has always been a privately intimate thing for the two of us, I’d say. I am moving to Nashville very soon so everything is about to change. When we get together for tour, it’s very natural. We’ve been turning on amps and playing instruments and songs for a very long time together so that part is just like riding a bike.

MV: Let’s talk “Town and Country” for a bit here. I was struck by “Downtown El Fenix,” and it gave me some old school Coconut Records (Jason Schwartzman) vibes, as opposed to The Postal Service, who you have been compared to. What were some of the thoughts behind that song?

BL: This song came together after getting sent a piano progression and vocal track from Dennis. He recorded the piano on his parents’ beautiful grand piano. It takes place in one of my favorite Tex Mex restaurants in Dallas, El Fenix. It’s where I take my grandmother when I am visiting home. The song is a mediation in the process of a divorce. My friend Sara Beth added absolutely beautiful backing vocals on it. I added and took away drums on it multiple times and am finally so happy with all of my overdubs on it.

DS: I’ve just found myself being really interested in divorce. So much emphasis is treasured and valued about the “marriage,” and divorces are shamefully swept under the rugs of memory. Death is just as fascinating as birth. Our friend Hunter Kaulmann started writing songs about divorce, so naturally, I did too. There was a wonderful NPR segment on a woman’s memoir detailing what she was wearing on her divorce day that inspired that stanza. I’ve always covered female songwriters’ songs and lately I have been writing songs from the perspective of a woman.

MV: Additionally, I noticed that two of the song titles on “Town and Country” mention cities and places. Was there anything special about those towns in particular?

BL: I think subconsciously geography plays a huge role in this band. I’ve also been extremely lucky to see so much of the U.S., whether it be from traveling with my family or playing music. The name St. Augustine actually comes from the type of grass. Growing up it was the kind of grass we had in our front yard, and I feel like I spent a lot of time lying on my back looking at the sky in that St. Augustine grass.

DS: Tour has definitely forced us to see so much we would have not seen without it. I love tangible items in songs. Our favorite songwriters anchor theirs songs in geographical things so we do as well naturally in imitation. When a song is written you are somewhere on a map, so it makes sense that sense of place creeps back into the song in someway.

MV: Is there a special meaning behind “Town and Country” as a whole?

BL: In a way I felt like it encompassed a lot of the record as a whole. Living in Nashville, it’s not hard to drive 20 minutes in any direction and end up feeling like you’re somewhere so far away from anything urban. I was so lucky to be born into a place where I had access to cool record and book stores and a great education. How would I be different if I was born in some podunk town in Texas miles away from anything but a Sonic and a Dollar General? The name of the record came from a car dealership sticker on the back of a car. For some the reason the phrase stuck, but it’s taken on a whole new meaning for me.

DS: I’ve always been so stoked on the duality of the title since it was first floated around. You work in a city in order to afford land in the country to commute to/from and rest your head on at night. It’s also the name of a Chrysler minivan. I like the idea of the record being a minivan full of little stories we wrote.

MV: Are there any plans to go on a tour for this upcoming album?

BL: Hopefully some shows in the Southeast and maybe a run up the East Coast but nothing concrete yet.

DS: Excited to see loved ones and show everyone some new songs.

DS: We’ve been super humbled and inspired by all the positive feedback from the singles released on this record. We are hard at work on the next release and are very grateful to all the listeners out there.

Town and Country is out now and is available via all digital platforms and the band’s Bandcamp.