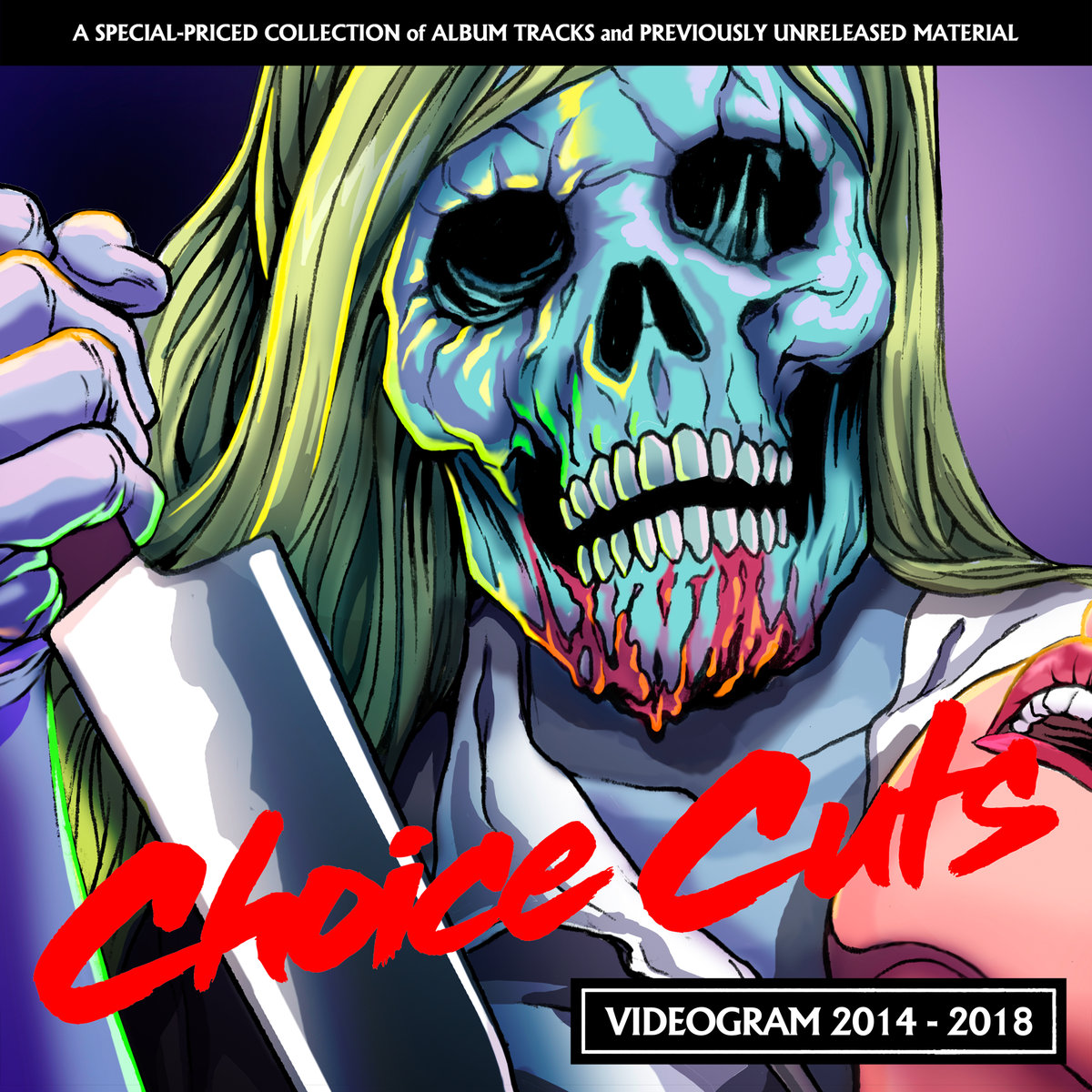 We recently passed the fourth anniversary of Videogram, the genre-inspired electronic project from Swedish producer and musican, Magnus Sellergren. The self-titled Videogram album made its debut in June of 2014, to coincide with Doc Terror’s Italian Horror Week, and was re-released last year as Videogram Redux.

Much like Redux saw the early recordings remixed and remastered, so are the 14 tracks on the new Videogram compilation, Choice Cuts 2014 – 2018. Sellergren’s label, SelectaVision is releasing the compilation on CD and digital, culling tracks from all the official Videogram releases, along with additional bonus tracks.

The album includes cuts from now-deleted EPs, never-released demos, remixes, and more, and is the perfect introduction for anyone wanting to dive into Videogram’s cinematic ouevre. Sellergren runs down the story behind each track for us, with some choice behind-the-scenes info.

Initially a Gladiatori dell’Apocalisse outtake that didn’t make it past the demo stage on account of me already having the opening track finished and this one not fitting anywhere on the EP sequence-wise.

As the title suggest, it’s an early tribute effort to Giorgio Moroder, whose production style I’m a huge fan of. Taking the same approach, the track builds with elements added every four bars (or so). Oddly enough, listening to it now, it actually reminds me of Goblin’s Buio Omega.

Taken from the discontinued Cobretti three-track digital EP. Inspired by the night-time serial killer montage in Cobra (1986), I really like the menacing tone of it. The drums are actually looped, using a track by Jamie Coghill, aka The Jimmy C, and the song gave me an opportunity to throw in some of my Jamaican dub influences into Videogram’s music, adding delays and different kinds of echoes to the drums. The sledgehammer hits, prevalent both in the movie and the EP’s tracks, are actually three different samples, all layered, including the dumbbells I use when I work out at home.

Always a personal favorite, “Horror Express” has an overall nice vibe and melody, and the rhythm track was actually inspired by and trying to create the chug-chug-chug of a stream train. When it was time to create videos for the Pre-Cert LP/CD, I always wanted to use the trailer for Eugenio Martin’s 1972 S/T Spanish horror classic for the track, but unfortunately the album version was roughly 30 seconds longer than the original trailer. I sat down and edited it, shortening the intro and tightening up the mid part, making for a “single version,” if you will. As nerdy as it sounds, I really love audio editing and am pretty satisfied with how seamless the cuts are.

I WARNED YOU NOT TO GO OUT TONIGHT

Inspired by William Lustig’s 1980 grimy video nasty Maniac and, more specifically, the subway sequence. I always liked how the track starts in one way, screeches to a halt and then kicks into a different gear. The nasal-y melodic “boo-bah” sound that goes left to right in the intro and outro is actually a *very* messed-up piano with a delay panned hard right.

A personal fave off the Gladiatori dell’Apocalisse EP, and easily one in the Top Five of Videogram’s collected work! Very driving and punchy, it draws some inspiration from Queens of the Stone Age circa Songs for the Deaf while keeping the Simonetti The New Barbarians vibe of the whole EP intact.

I think it’s got a nice forward motion to it and the track is, production as well as composition-wise, a personal high point that I’m still very, very proud of, and I wouldn’t want to change a thing on it. The sweeping, screechy effect sounds in said mid-part are actually broken glass played backwards at different speeds, with an echo panned hard right to give it a nice, wide effect.

100% inspired by 1960s instrumental surf music. I wanted to create something similar to The Revels’ 1964 “Soft Top,” hanging it on a melodic line with a low voice using the iconic echoplexed “Ki-ki-ki, Mah-mah-mah” in a similar way. The heavily-modulated voice is me, by the way, and the solo was a total of four takes to achieve the effect I was looking for.

A track taken from the Videogram and Acid Washed collaboration sessions. Based on an old demo of mine that Andrew mutated into something completely different; we took turns going all-out, throwing in every crazy idea we had, drawing from lots of influences, including Front 242, Ministry, and RevCo, slowly building it into this mammoth industrial-tinged beast.

Collaborating with the French musician really lifted me up in so many ways. It opened up my head production-wise, music-wise, how I approach my work, and had me really up my game. Also, having Andrew insisting I did the mixdown, calling my mixing skills really good, is one of the most awesome professional compliments I’ve gotten in these four years. And, with so much happening on the 30+ tracks, it was quite a handful and I put to use pretty much every technique I’ve learned over the years.

One of the earliest, if not the actual first, tracks written as Videogram. Built on a really good drum track by Australian multi-instrumentalist The Jimmy C, I went for an occult horror vibe on this one, trying to create something that’d fit right in with 1970s classics such as Blood on the Devil’s Claw or The Wicker Man.

The track’s got a nice minimalist vibe to it with Jamie’s drumming pushing it forward and keeping things interesting. The thunder effect heard in the intro and outro is actually a recorded gun shot, played at different speeds and then run through a spring reverb.

One of either three or four different mixes of this track, the song is one of the most troublesome works so far in Videogram’s history — which you really can’t tell listening to it now. This went through so many false starts, mutations, mixes, but in the end I think it turned out good despite the mountains of work it took to finalize it.

I went for some minimalism in this one, pulling things back and giving the melody a bit of a Middle Eastern flavor to it while the bass line, of course, is an obvious nod to Giorgio Moroder. Memory fails me, as the samples used are old (I created and have been keeping a sample library for years) but I think the opening screech samples are combination of a fax, feedback and a dial-up modem — all heavily modulated.

A demo from the Slasher EP that I began working on post-Pre-Cert. The track, as well as the whole EP, was scrapped on account of me feeling it was a bit repetitive. Drawing inspiration from Giorgio Moroder, the track’s got a nice, menacing tone to it and kinda reminds me of what I achieved with “The Night Slasher.” Even though the title is taken from a De Niro monologue in Taxi Driver, the images from night scenes in Maniac, Driller Killer, and Nightmares in a Damaged Brain provided the visual inspiration, and I kinda envisioned a man on the edge, driving down neon-lit city streets at night while I was working on it.

This silly Popcorn-esque number is just me at my goofiest. Although sounding nothing like it, I drew inspiration from Piero Umiliani’s “Mah Nà Mah Nà” while working on this one, wanting to create something that was both silly and catchy (the melody was stuck in my head for days after recording it!). I might add there is also a vocal version of this song, locked deep down in the Videogram vaults, as the world ain’t ready for it just yet.

The 2014 single version marked a first dip into retro-tinged disco for Videogram and I always loved the fun and slightly goofy vibe of the it — just like the installments of the original franchise!

Lots of fun sounds created for this one. The opening build-up is a backwards piano chord mixed with different distorted scraping sounds — with additional distortion added — and the solo is several takes with different synth sounds, including a piano that you probably can make out if you listen closely.

Already having the mammoth 13-minute “Man is the Warmest Place to Hide” track on the Pre-Cert LP/CD, “Outpost…,” along with similar-themed tracks, were omitted with some released as a digital single as I thought it’d be overkill having so many tributes to John Carpenter’s iconic 1982 The Thing squeezed onto one album.

Trying to take the overall nihilistic tone of the movie and turn it into music, I went for a doom-laden vibe, working with distorted drones and adding a melancholic melody that’s probably one of my personal favorites.

Choice Cuts can be ordered from Videogram’s Bandcamp, and comes as a red vinyl-effect CD in a large printed outer wallet with printed inner record-style sleeve.