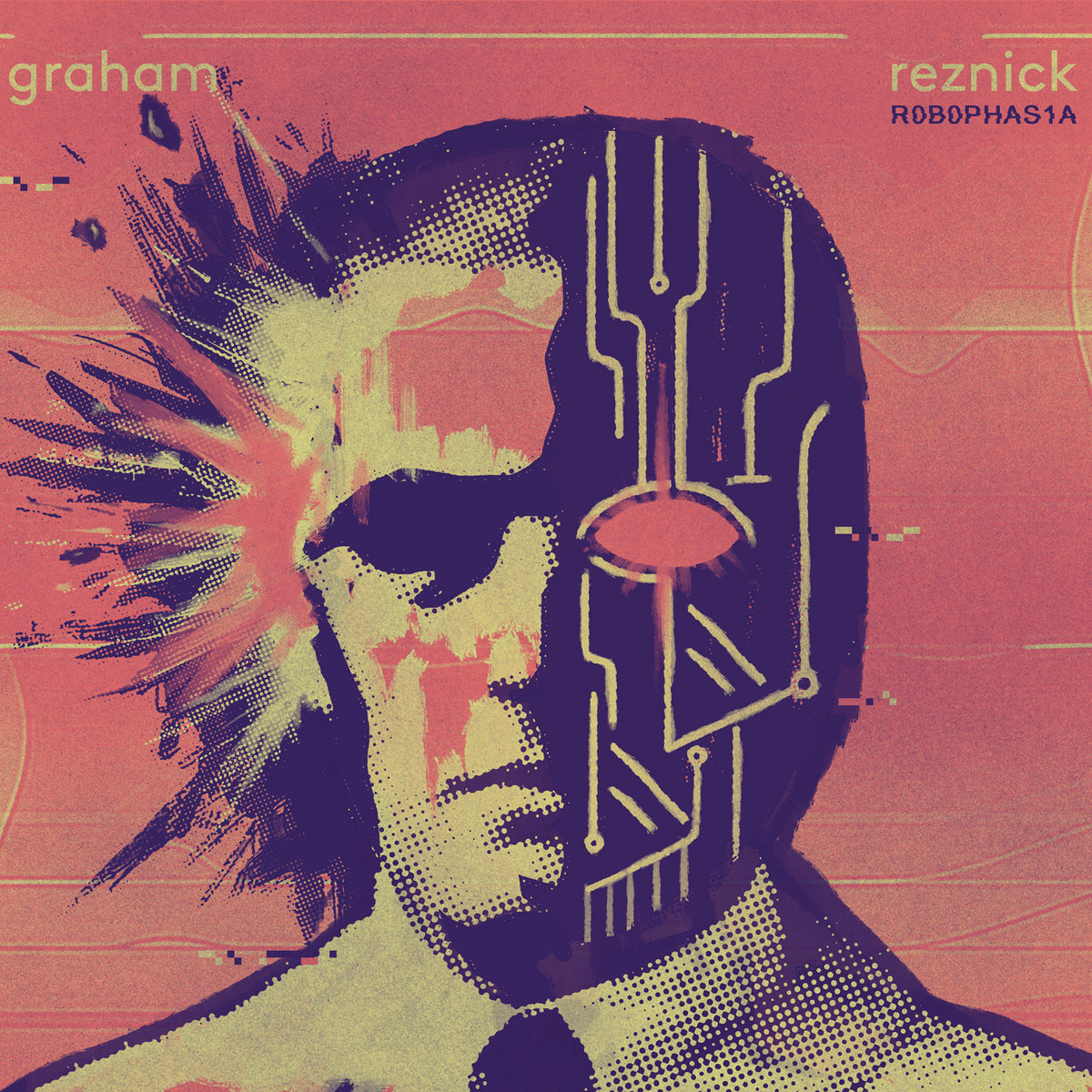 For those who don’t follow underground electronic music, Graham Reznick might not be the most familiar name. However, for fans of unique and intriguing genre films, his work will be recognizable. Reznick has done sound design for the majority of director Ti West’s films, such as The Innkeepers, The House of the Devil, Sacrament, In a Valley of Violence, and even the V/H/S segment, “Second Honeymoon.”

He released his debut album, Glass Angles, in February of this year, and R0B0PHAS1A follows fresh on the heels of that Data Airlines cassette and Death Waltz LP. However, while that LP fell more in line with Reznick’s cinematic work, R0B0PHAS1A is a danceable, joyous melding of ’80s synth pop (“Atomatics”), robotic Kraftwerk jams (“YKWYA”) , and even a song which reminds me ever-so-slightly of No Doubt’s “Hella Good” (“Rope”).

The vibe of the record is the rhythm and ride of a video game soundtrack, but without the devotion to chiptune. Much like Kid Koala’s recent score for the indie game Floor Kids, R0B0PHAS1A makes you want to play some games and have fun with your friends without feeling like it’s overtly tied to any specific thing.

As the label points out, the record is “a jerky complexity of jaunty beats and carefully considered melodies,” and I couldn’t agree more. You’ll find yourself dropping the needle on your favorite cuts over and over again. The diversity of genre combined with the continuity of darkened nightclub energy comes through in each and every one of the 10 cuts.

The vinyl comes presses on yellow splatter vinyl, which sounds absolutely amazing. The bass really hits on this record, and I can’t recommend enough cranking this as loudly as possible. It’s a nighttime party record of the first degree, and if your friends don’t find themselves asking for “that record with the robot getting its brains blown out on the cover,” they’re not your friends any more (seriously: how awesome is that Hauntlove artwork?).

R0B0PHAS1A is available on vinyl from Burning Witches. 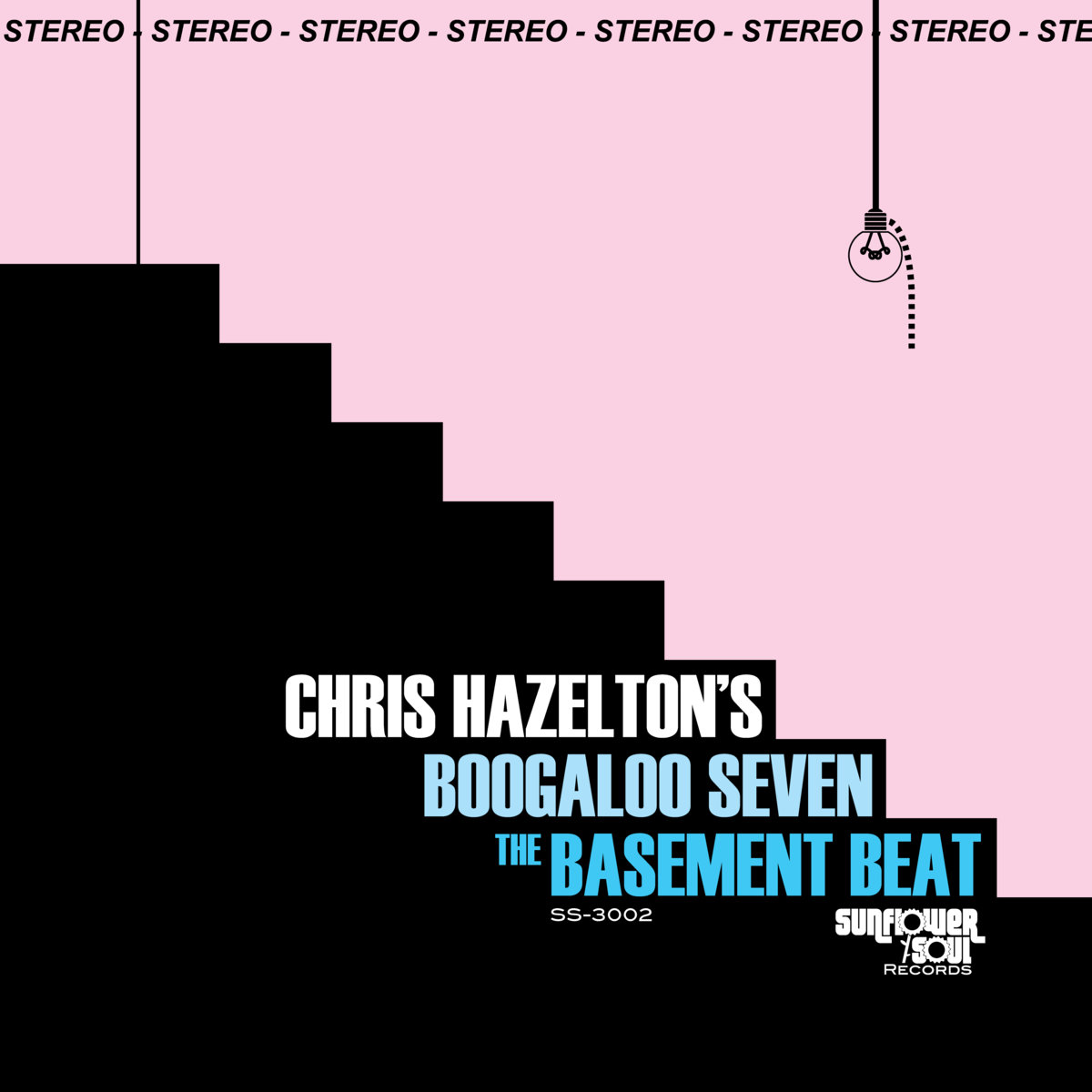 If I’ve had one issue with the Kansas City jazz combo that is Chris Hazelton’s Boogaloo Seven, it’s that their recorded output thus far hasn’t really hit the “boogaloo” part of the name. It’s not that the music isn’t fantastic, because it is: their debut full-length, the 2016 live album, Soul Jazz Fridays, features some amazing cuts, especially the closing jam that is their instrumental cover of Justin Timberlake’s “Suit & Tie.”

However, the music has always leaned closer on record to the title of that previous LP — soul jazz. It’s funky and rhythmic, and it’s definitely something to move feet and hips, but there’s never quite been the Latin rhythms and that particular shuffle that is supposed to define the sound. It’s that “one, two, boo-ga-loo” pulse defining the likes of Ray Barretto’s “A Deeper Shade of Soul” that I’ve always hoped for, while never quite getting it.

On The Basement Beat, though, they finally nail it. While “Tru-galú” starts out with a rhythm that’s almost like a marching band playing Latin music, once guest percussionists Juan-Carlos Chaurand and John Kizilarmut start to let loose, the song starts swinging. The horns feel wilder and more free than I’ve ever heard on past tracks, and it’s absolutely glorious.

Earlier cuts on The Basement Beat, such as the title track and “Fryin’ Pan,” have the Boogaloo Seven getting funky, but definitely on the jazz side of things. There’s an element of soul to everything the band does, but they’re not rocking a Menahan Street Band vibe, here. This is a band that knows how to cut a rug, but you damned well better be wearing a shirt and tie with your good shoes while you’re doing it.

The closing cover, an instrumental take on Sharon Jones & The Dap-Kings’ “100 Days, 100 Nights,” pays wonderful homage to the late soul singer, and perfectly caps a record that sees the band take to the studio and absolutely nail their signature sound.

The vinyl sounds pretty great, and the purely-analog recording process lends The Basement Beat a warmth and fullness that makes it sound like it could’ve come straight out of the late ’60s. The jacket artwork — complete with a band write-up on the back by Flea Market Funk’s Jamison Harvey — lends the whole package a further vintage feel with the angular look of a Reid Miles Blue Note sleeve.

The Basement Beat is available on vinyl from Sunflower Soul. 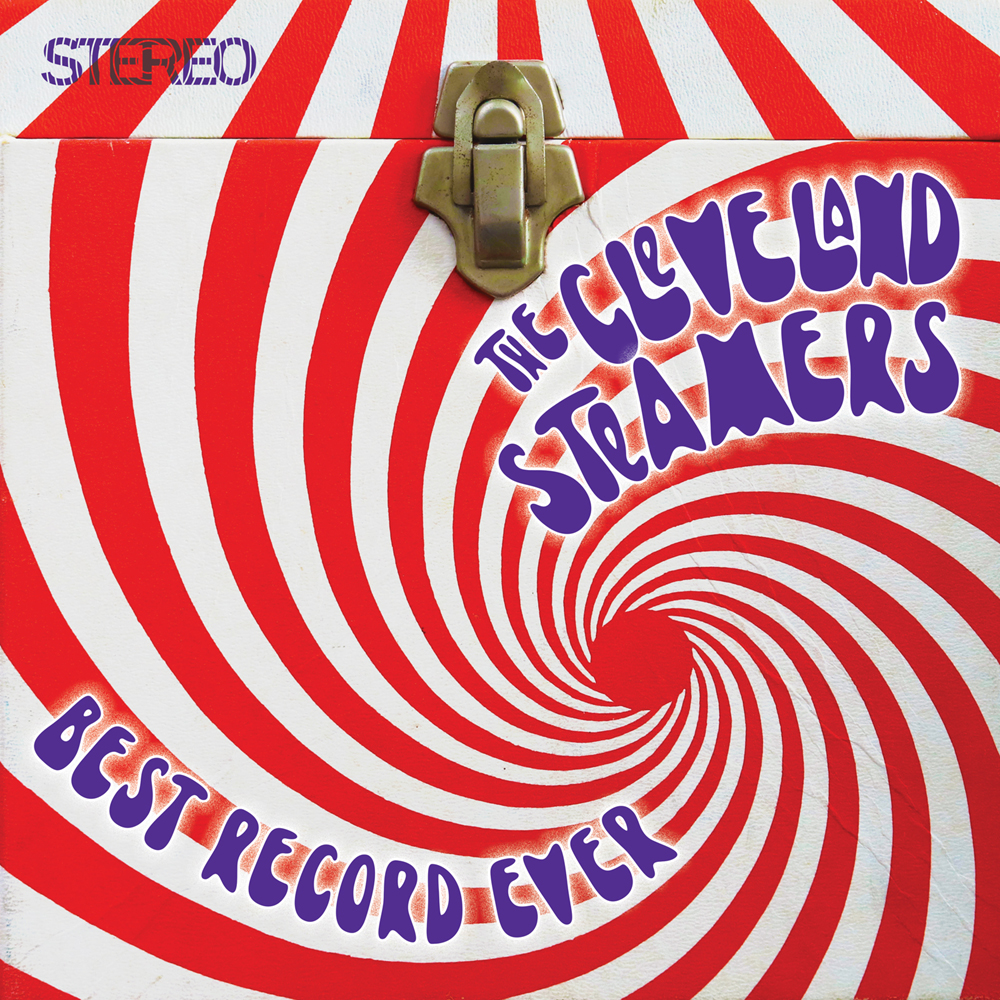 The Cleveland Steamers — Best Record Ever

Smog Veil’s support and continued devotion to musicians who would otherwise be considered legacy artists has resulted in some interesting records hitting my mailbox, but none more so than The Cleveland Steamers’ Best Record Ever. It’s a dark, moody little album that swings between the two modes of cabaret-influenced pop and power-pop leaning rock ‘n’ roll.

A lot of that can be attributed to whomever is singing in the duo of band founder Cheese Borger and his wife, Meredith Rutledge-Borger. If it’s Cheese, you get the rougher cuts, and if it’s Meredith, you get the tracks inspired by “noir drama…like Badalamenti and space jazz,” as she puts it on the label’s website.

Split down the middle as it is, with five songs from each, it means that Best Record Ever never really settles into a proper groove. While all the songs are pretty enjoyable — especially the jazz by way of Concrete Blonde cut, “Dream of Me” — the crooning of Meredith and the declamatory delivery of Cheese are so different that the album feels a bit herky-jerky.

It’s not until the final few songs that there seems to be any sort of cohesion between the two, with Meredith’s vocals on the ’60s beat cut “Maple Leaf Girl” pairing nicely with the punk romp of “Shut Up!” I get the feeling that this is a band that you need to see cutting loose on stage to really appreciate, but while the Cleveland Steamers’ Best Record Ever might not exactly live up to its name, it’s definitely all right.

The LP comes pressed on blue vinyl, and it sounds pretty good. The mastering does a good job of handling the dynamic shifts between quiet and slow, and loud and raucous, pretty ably, and that’s probably the most important aspect to the LP. The jacket cover looks like a 45 singles case, which is neat, but the back cover falls prey to the usual Smog Veil design aesthetic of “fit everything on it!” There’s a printed inner sleeve y’all – clean up the back and put it inside, rather than using the inner as a record store plug.

Best Record Ever is available on vinyl from Smog Veil. 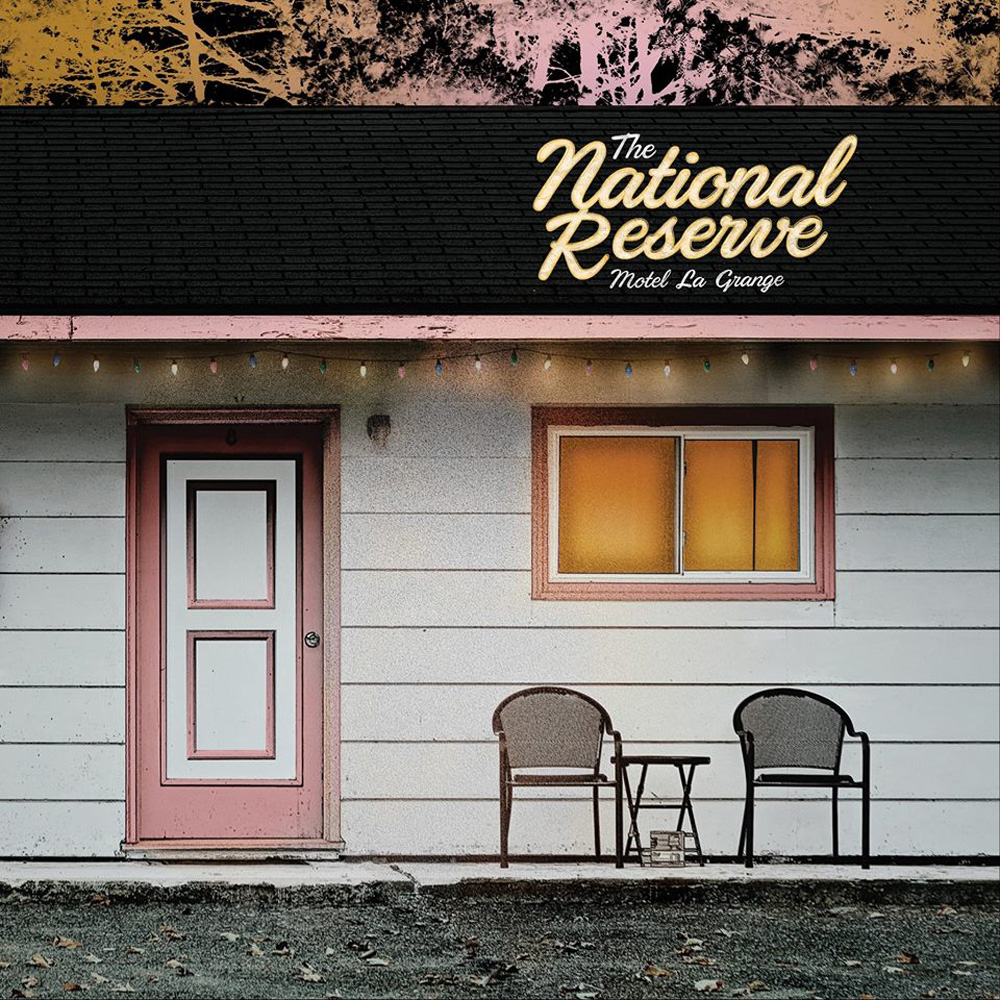 The National Reserve’s label, Ramseur Records, is best known for putting out every Avett Brothers’ release up through Emotionalism, as well as every record from Bombadil, so it oughtn’t come as a surprise that the Brooklyn band purveys a deep emotional strain of Americana. There’s a little more rugged blues here on Motel La Grange — think J. Roddy Walston & The Business — but it’s still the sort of music that’s heartfelt and kinda sad.

I do appreciate the way the National Reserve pulls in horns and backing vocalists, along with a whole host of other musicians for Motel La Grange, since it gives the whole album a real Muscle Shoals feel. That’s especially true on a song like “Standing on the Corner,” but the album is otherwise kind of anonymous. The band plays the kind of music I expect to see play on my favorite bar’s back patio, and for whom I’d definitely clap and whistle after every song, but I probably wouldn’t be able to recall specifics 20 minutes after they’d left the stage.

The band has one notable exception on this album, however, and that’s the second-to-last song on the first side, “Don’t Be Unkind.” Goodness, it’s lovely. The interplay between John LaDeau’s slide guitar work, Sean Walsh’s raspy vocals, and Steve Okonski’s organ work results in a track that is instantly familiar the first time you hear it, even though it’s wholly original.

The timelessness of its melody and gentle vibe literally made me look up from whatever else I was doing on my first listen to the album, walk over to the turntable, and start the track over. It’s that good. The band is talented, to be sure, but with “Don’t Be Unkind,” they elevate what they’re doing to superlative.

The Motel La Grange LP comes pressed on 180-gram black vinyl, with a picture of what looks to be my parents’ old front porch on the jacket cover. The design of the packaging is well-done, if somewhat similar to any number of records in the “sad songs by dudes with beards” sub-genre of alt-country and Americana. The record sounds smooth, although I could stand a little more grit in the recording to give it some heft.

Motel La Grange is available on vinyl from The National Reserve.