The Modern Vinyl Podcast is now Stereo Confidential. Still a music criticism podcast. Probably even nerdier. First mini-series is on Copeland and starts Jan. 20. The website. The patreon.

We’re starting a new podcast. It will be called Stereo Confidential. It will be in the same RSS feed as Modern Vinyl (aka you don’t have to resubscribe). And it has the same hosts as Modern Vinyl. You should already see the new name & logo if you’re subscribed.

“Stereo Confidential investigates the music world. From the landmark, to the underrated, to the downright bizarre, Chris + James + Michael aim to uncover the artists, albums, songs, and moments that have made music what it is. Show will take the form of mini-series and case-of-the-week episodes. Now taking cases. Leave a voicemail at (844) 468-8253.”

Our amazing art is by Kath Anderson and she was a joy to work with. I mean…the banner (up top) is inside the “office” and the logo is the outside of the office! How cool is that.

The first episode will drop Jan. 20 and the first 6 episodes are a Copeland mini-series. Each album, dissected heavily, leading into the new record. You can see our beginning schedule below: 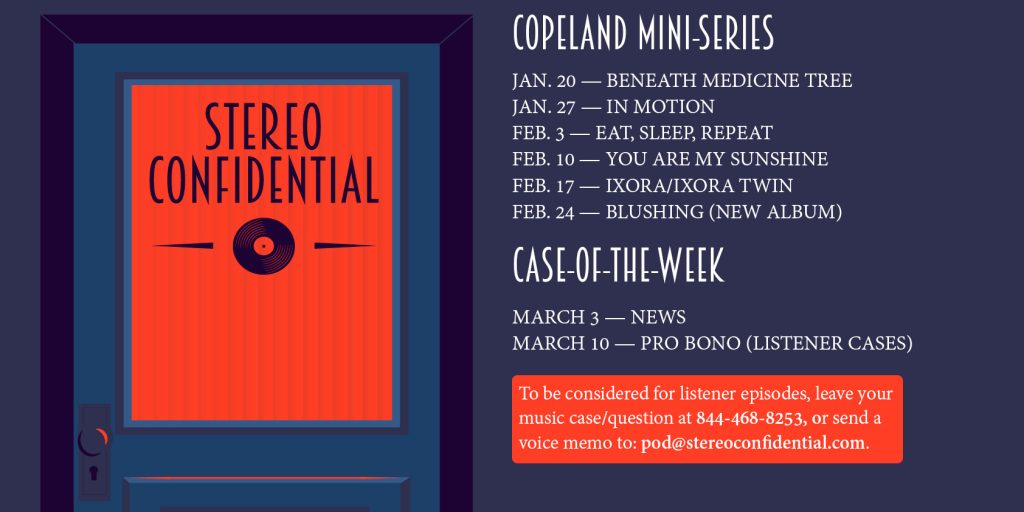 What else is there to say…..

— The MV social media accounts will mostly be used for Stereo Confidential from here on out, although I will drop some newsletter reminders and deal links from time to time (I know all the MV’ers love those deals). It will be more so, here’s the podcast and some music stuff I like, though.

— The Patreon will look a little different. We’re adding things like a Discord community to talk music, album commentary episodes monthly, and more. The $10 pledge level gets a pin of the new logo (shipping in March 2019).

— We’re really excited for people to call in and leave cases — (844) 468-8253. What’s a case? Simply put, it’s an episode suggestion. It’s a question you have about a band; it’s an album you want us to discuss for whatever reason; it’s something you think is weird about the music world that you’d want some episodes on. Be as specific as you’d like. We’re gonna take those questions and form entire episodes around them.

— I’ll end with this. We wanted a framing device to investigate music in this old-school manner, where every scrap (or “shred”) of evidence leads to somewhere else, serves as another piece of the puzzle. We look forward to making a really nerdy show of album deep dives. And we hope you’ll follow us on the journey.