My Experience With Recards: The Turntable Birthday Card 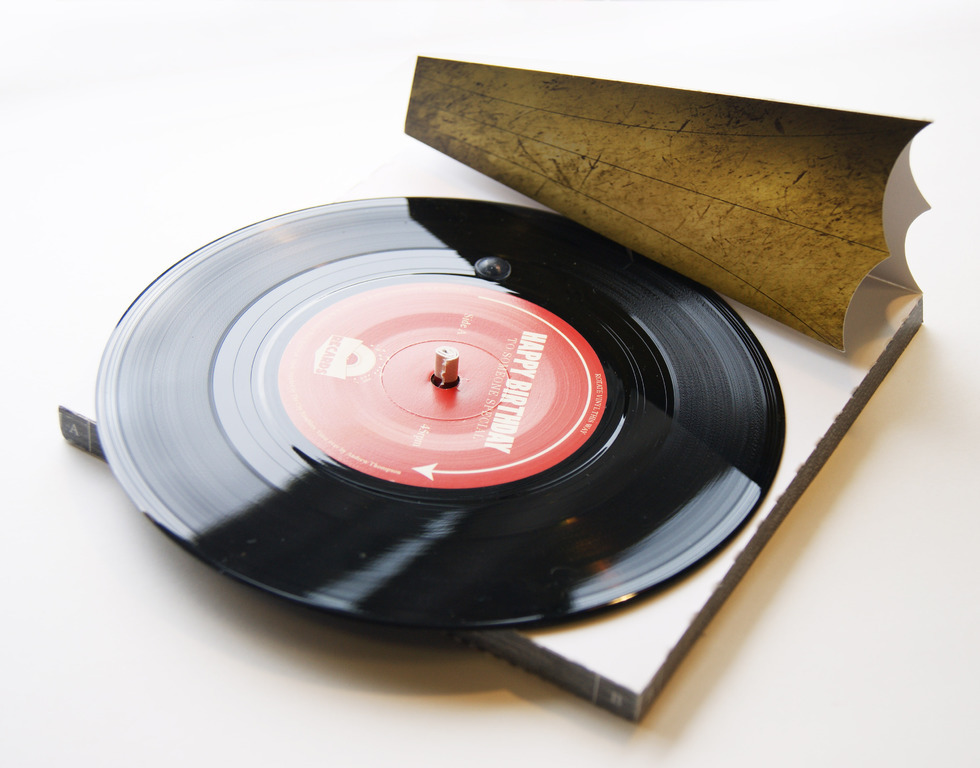 A few weeks ago, an MV reader alerted me of Recards, advertised as “The Original Record Playing Gift Card,” but more accurately described as a novelty birthday card, one that doubles as a turntable.

The card comes packaged as your typical 7″ record, complete with the 7″ black vinyl, sleeve, instructions (you’ll definitely need them) and your envelope to actually send this to whatever collector is celebrating. The instructions, pictured below, has you tear off the card front, folding alphabetically labeled tabs to form a “secure base” for that turntable. Another square of cardboard (from that front of card) is rolled up to form a cylinder that sticks in your record center. I had to get my girlfriend’s assistance on this part, as it doesn’t naturally form to that shape. Eventually, the cylinder was small enough to go ahead, but it may take some effort.

From there, the stylus folds over and Tim, from the Recards organization, suggested that I tape a quarter in a marked location for what I’d assume is extra weight. From there, it was up to me to manually spin the record, in the direction noted, which is supposed to play the song below:

But for a while, I heard nothing….I employed the girlfriend once again, with her spinning and I steadying the stand. And little by little, as we settled on the correct speed (this is 45 RPM), I could begin to hear the slightly sped up (still working on that speed) voice that plays in the track. Now what was on my record definitely wasn’t the song above — I double checked through the actual turntable — but it was a birthday greeting and still an interesting little experiment.

Is this something you’d shoot over to your unfamiliar parents, hoping they’d take the time to fold, roll and spin the record at exactly the right speed? Probably not as it does involve about 15 minutes of work. But it’s something I think actual collectors would enjoy messing around with. And way cooler than those musical cards that just have the little computer chips in them.

With shipping, the product is a bit pricey, at £2.99 for the card and around £4.75 for the postage, but at a little over $12, that’s not too bad for a nice gift to your fellow collector. You can pick up a Recard over at their UK-based webstore.