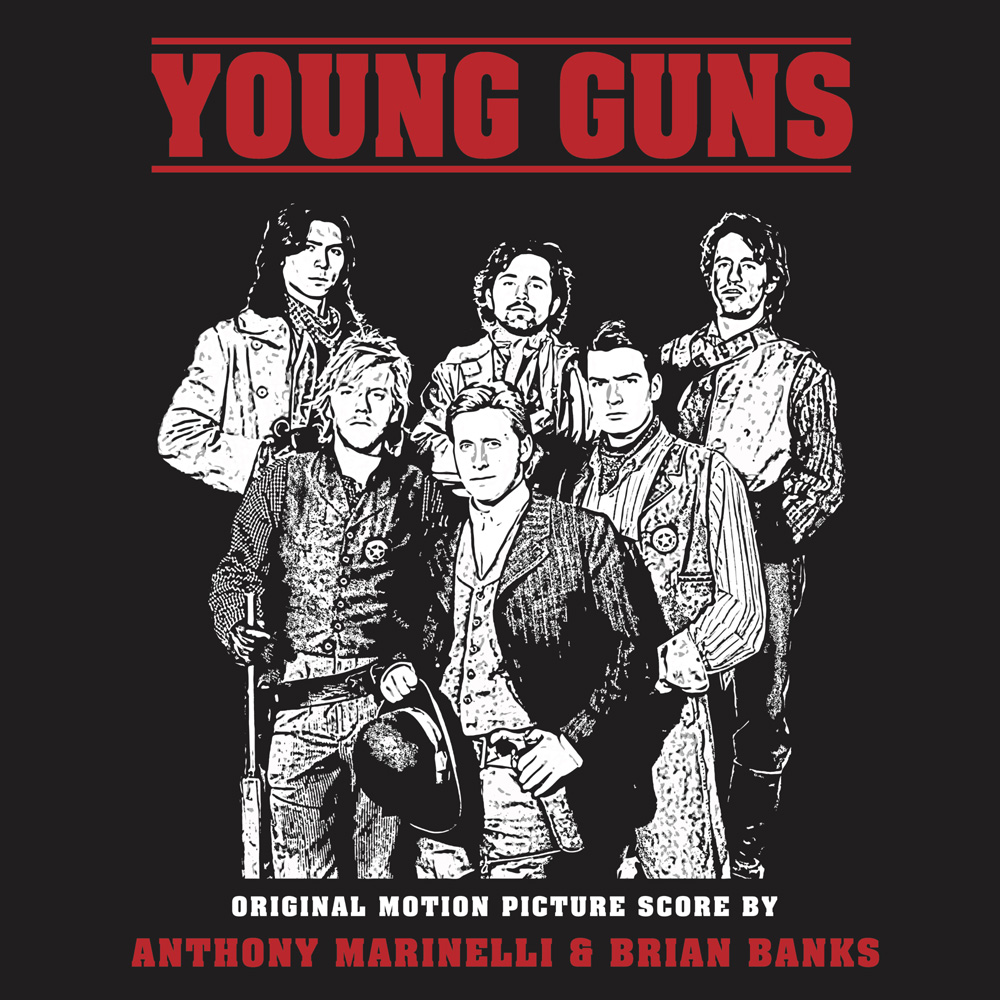 Rusted Wave — those who released the amazing Wet Hot American Summer soundtrack — recently launched a Kickstarter for a vinyl release of Anthony Marinelli and Brian Banks’s score to the 1988 western, Young Guns. Despite the star power of the film, which starred the likes of Emilio Estevez, Kiefer Sutherland, Charlie Sheen, Lou Diamond Phillips, and Dermot Mulroney, the score’s never been released in any format. It’s rather amazing to think about, especially as the 1990 sequel saw not only the release of Alan Silvestri’s score, but an attendant 11-track album by Jon Bon Jovi, titled Blaze of Glory, which was a collection of songs “inspired” by the film.

The kind folks at Rusted Wave were cool enough to share the remastered files for the score. Having listened to Young Guns, I am just amazed at the mastering job on this. The mix of acoustic instrumentation and the ’80s synths, plus the electric guitar? I can’t imagine how hard it was to get everything sounding properly, and it’s clear as a bell. It’s been ages and ages since I saw the movie, so I’d kind of forgotten that the score walked this line between traditional Western and action movie tropes. It’s so unique and interesting — it’s hard to believe that this gets left aside when talking about its contemporaries like Cobra or Robocop.

One particular track, “Pass the Peyote” is so intense and weird, it’s worth the entire purchase price. Everything else — especially the opening and closing credits — is also kind of awesome and unique in its own way, as well, and I can totally see why Rusted Wave chose to release this. We were really intrigued about this release, and spoke via e-mail with Rusted Wave’s chief merch officer, Jake Lamme, about the possible upcoming release of Young Guns.

Lamme: Young Guns was one of my favorite films growing up! When it was released in 1988, it was a modern take on pretty tired genre, which totally appealed to me even as a kid. It was so different than the old John Wayne or spaghetti westerns that my dad always watched. After nearly 30 years, it still stands up — in large part due to the score. I searched high and low for this album over the years until I recently learned that it had never been released. Once I found that out, it was a no-brainer for Rusted Wave to secure the rights to release it.

MV: Is there a cut which stands out most for you?

Lamme: The “Main Title” is my favorite, by far. The opening sequence to the film is in my personal top 10 because of it.  But “The Watch” is also pretty special.  I think it’s the only track in the score that evokes positive vibes from beginning to end. There are other standouts, but those are my favorites.

MV: Why do you think this hasn’t ever been issued?

Lamme: This would be pure speculation, but I just think that the studio (Morgan Creek) had other priorities as it was establishing its brand. Young Guns was the studio’s first film, and they quickly churned out other great films in the late ’80s and early ’90s (including another personal favorite, Major League). It certainly wasn’t because lack of demand. Composer Anthony Marinelli told me that he has had hundreds of people ask for the score to be released commercially over the years.

MV: What’s your history with the movie?

Lamme: Just a fan! We here at Rusted Wave are geeks about ’80s and cult classic films.

Why Kickstarter for this release — are you hoping to gauge interest, rather than pressing and hoping?

Lamme: Exactly. Kickstarter is such a unique way to help promote a record and gauge interest. We thought we’d give it a shot with this release, and we are glad that we did! We are already up to 30% in the first few days!

Have you heard any support or interest from any of the actors involved?

Lamme: Lou Diamond Phillips has shown us some social media love and helped spread the word. We have some feelers out to the folks who rep some of the other actors.

You can find details on Rusted Wave’s Young Guns release at Kickstarter.