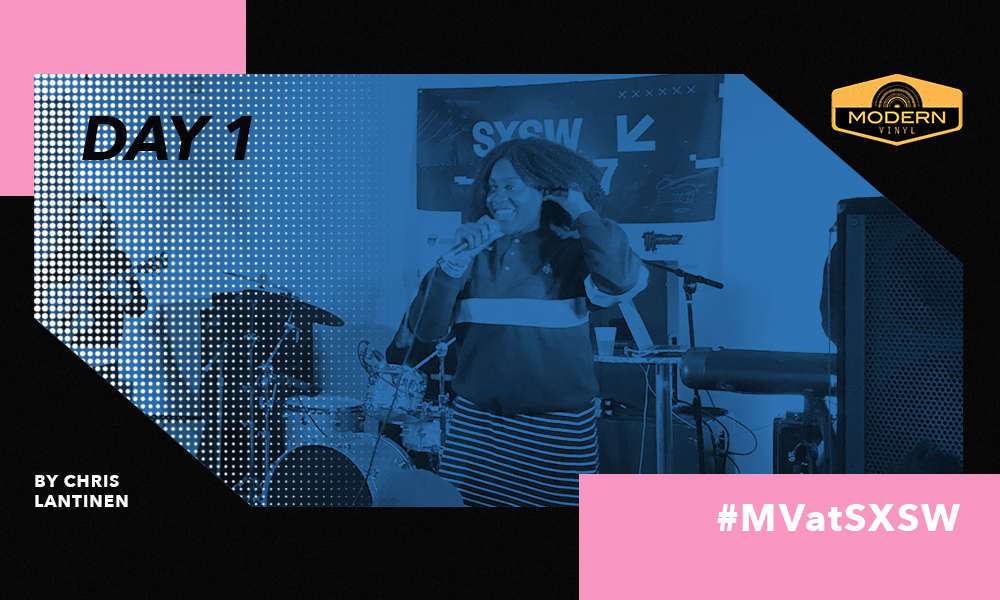 Stop 1 had us heading slightly out of the downtown and over to the Eden House Co-Op for opener Mother Evergreen. Sporting double keyboards, the band was well mixed, the high keys really standing out, especially considering the house show setting. Vocals were tough to pick up, but that difficulty made a 3-way vocal collision later in the set a clear highlight. It was a first time viewing for the MV staffers, so while I can’t point out specific songs, I can recommend a full listen below. Other bands playing that day included Ratboys, Half Waif, Slingshot Dakota, Prince Daddy & The Hyena, and a bunch more.

A short set, but made quite an impact.

A long, around-the-block, wait eventually led to seeing the last 4-5 songs of the Noname set, an MC you’d be unlikely to see at a venue this small past this year (have they announced openers for the upcoming Chance tour?). She established a quick, fun connection with the first couple rows, locking in with the few that knew every word. Self-admittedly, she employed her socially awkward demeanor as a balancing force against the more serious moments. Having the crowd call out her name, she laughed, jokingly stating the moment was “for vanity.” “Yesterday” closed out the set and provided a clear high point, her bass/keyboardist jumping in on that guest hook.

A set will have you checking out the record on the walk home. Guaranteed.

Sweating through a suit jacket, Francis Farewell Starlite took the stage sans intro, instead dancing to whatever the DJ had been previously spinning. That’d be a pretty good summation of the entire set. While, yes, employing an excellently autotuned vocal package, the focus fell more so on an energetic, almost cocky stage demeanor, leaping up onto the speaker later in the set, security holding it steady.

Myself and Mike arrived at around midnight, fully ready to take in both Real Estate and Sleigh Bells. We quickly got tired, looked at each other, and went to get donuts.

— Drink Count: 4 Lone Star tallboys our Airbnb host left in the fridge; 3 shots of tequila at Torchy’s Tacos at 5:40 in the afternoon (I definitely made sure to mark down that time); 2 vodka sodas, cocktail (free drink tent); 6 more Lone Star tallboys at Maggie Mae’s; 10 mixed drinks at Levi’s Outpost’s open bar.
James was not with us the first day, but reported the following: 40 ounces of High Life. He also mentioned a couple times he was verified on Twitter.

— Status of Absinthe (there’s some random absinthe in the freezer we keep thinking about trying): Have not touched yet.