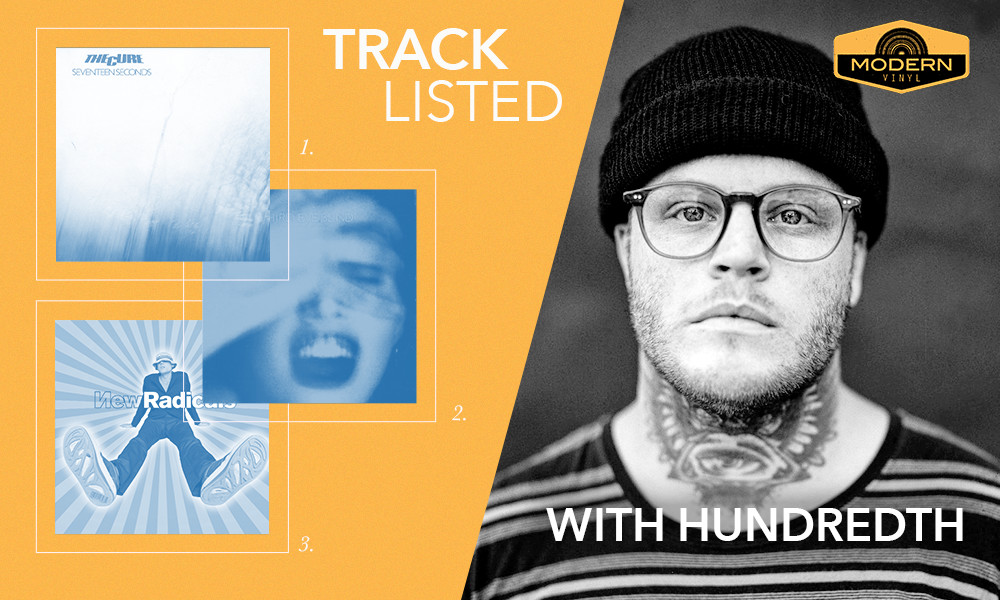 South Carolina’s Hundredth has graduated from the ranks of their past material, which bled proud, weathered melodic hardcore. On their latest for Hopeless Records, RARE, the band ventures into cooler, calmer territory with an integrity grounded more in nuance and grit, rather than energy fed on brotherhood and heart. Guitarist/vocalist Chadwick Johnson offered some insight into the new sonic territory with his Tracklisted entry, streamable below.

The Cure — A Forest

The Cure is probably my favorite band. I stumbled upon them around age 15, obviously starting with the big, poppier hits which I still love (“Friday I’m In Love,” “Just Like Heaven,” etc.) As I dug deeper into The Cure, I found Seventeen Seconds and this song in particular has always been a standout as one of my favorite Cure songs. I love the eerie melodies. The song just feels cool to me. Disintegration is probably my favorite overall record, but this song is one I always go back to. We used this record as a huge reference for the clean tones on our record. We spent days dialing in the perfect tone and The Cure was the Mecca!

The Smiths are up there for me as far as favorite bands go, and “Still Ill” is one of my favorite songs ever. The way it moves and the way Morrissey carves his own way through it vocally makes it one of the coolest songs ever. My goal with the songs on RARE was to make the vocals intertwine with the rhythms, with the main influence being The Smiths. I’ve always loved Johnny Marr’s guitar work, as well, and I think Alex [Blackwell] is channeling that a bit on some of the leads on our new record.

The way this song builds and stacks up is incredible; there’s tension and relief. I first listened to Kid A in a dark room with headphones on and it felt like a religious experience. When “Idioteque” came on, I was full-on peaking! I love the chords used in that song and the way they work with the drum beat. I don’t know how much this song was channeled into our record, but I think some of the vocal phrasings definitely inspired me to get started on some songs on RARE.

I didn’t really want to put any slower jams on this, but I can’t resist this one. The National is my absolute favorite modern band. This song actually played at my wedding before my wife, Taryn, walked down the aisle. It’s an insanely powerful tune and I still remember the feeling I had when I heard those intro chords and Matt Berninger’s brooding voice on this song for the first time. I definitely channeled some National vibes into RARE; I always felt like singing a little lower was more natural for me than singing super high and trying to hit those upper notes. The songs I’ve always connected to have been more about the delivery and emotion than any showy singing ability. I think that sensibility was definitely channeled here.

At some point in the mid 2000s, I bought You Forgot It In People randomly at a Best Buy or some big store like that. I think I had seen something about Broken Social Scene on Soulseek or one of those sites. After that it was in my car for years, and I used to play it loud through my speakers at the local skatepark when I was there at night. I’ve always loved the vibe of this song in particular. The drums on “Stars and Sons” are simple in a perfect way and there’s just enough spice in the rhythms to make it interesting. While writing RARE, Alex and I definitely emphasized that kind of simplicity. We tried to focus on leads that felt better and provoked an emotion instead of really busy and sporadic melodies.

New Radicals — You Get What You Give

This song is a straight up heater. I remember my dad showing me this song when it was on the radio a bit in the late ’90s. The melodies in this track are gold and the overall feel is incredible. To be honest, I’ve never really listened to a lot of other New Radicals stuff, but this song is a jammer. [Writer Note: You’re not missing much. They broke up shortly after that song broke!]. I think what I like most about this song is how driving it is, and that was another emphasis on RARE. We wanted the songs to all be driving in their own unique way.

The skate video Yeah Right! by Girl is, in my opinion, still the greatest skate video of all time. I was obsessed with it when I was 15 and 16. It stayed inside my TV/VCR combo in my room for a long time and I watched it pretty much every day. I first heard Joy Division when it soundtracked Marc Johnson’s part and was soon obsessed with this song. I ended up watching the credits to see who it was by and now Joy Division is one of my all-time favorite bands. Thanks Marc! I wish I had your flip-in, flip-out manny pad skills. We definitely channeled Joy Division all throughout RARE, mostly in bridges or intros with bass-heavy parts over rambling drums.

Tears For Fears — Everybody Wants To Rule The World

This song is sexy as hell. It has to be on some “greatest songs of all time” list somewhere. “Everybody Wants To Rule The World” used to come on the radio in the car when I was a kid and I always loved it. Even now I feel like every time I listen to it, I like it even more — it’s just such a well-crafted tune. We listened to it a lot in the studio while recording RARE. It wasn’t ever really channeled into anything directly, but was just always a reference point for great songwriting.

Billy Idol — Eyes Without A Face

Another sex bomb flying at ya on this one. Billy Idol is a punk rock badass gone mainstream and I think that’s sick. This is another one I used to hear in the car as a kid. It was a toss-up between a couple of Billy Idol songs for this playlist, but the way he breaks it down about halfway through “Eyes Without A Face” is so damn cool that I just had to put it here. I love Billy Idol’s vocal style — it feels so effortless and dark in an awesome way, and I definitely tried to channel a bit of that into the vocal stylings of RARE.

I can’t really remember how, but somewhere along the way I got really into Third Eye Blind and specifically their self-titled record. This is probably my favorite Third Eye Blind song and this record in general is an absolute classic. I’ve always dug the big rock guitar tones on this record and we definitely tried to capture that tone on some of the more “rock” tunes on RARE, although we definitely washed it out a lot more.

Thursday — Understanding In A Car Crash

Thursday was probably my first “favorite band.” I can honestly say the bass note at 27 seconds into this song is the reason I first wanted to play bass and start a band. I got Full Collapse when I was around 14 years old and became super obsessed with it. It was the first time I really noticed the lyrics in a song, and I felt like I could really relate to the tracks even though the meanings were all buried in metaphors. I used to write the lyrics on all of my binders and bookbags in high school. I even had a pair of shoes that bore the words: “I don’t want to feel this way forever,” in sloppy, teenager-written Sharpie!