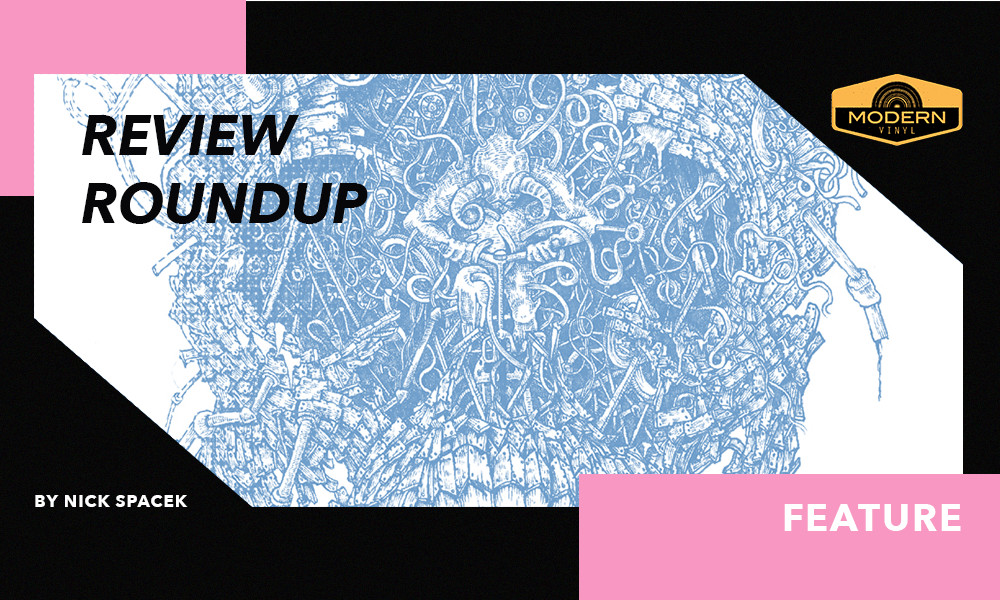 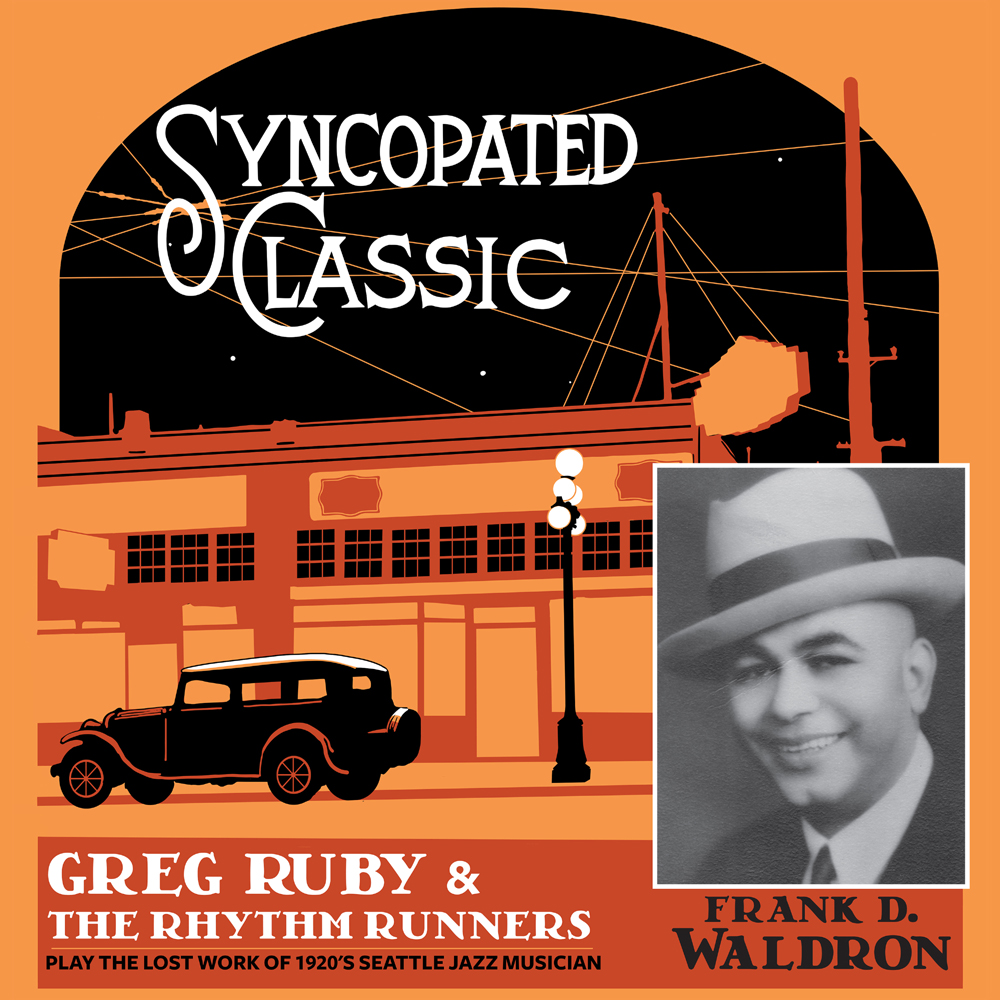 If the folks in Greg Ruby & The Rhythm Runners, a modern Seattle Prohibition era jazz combo, had a little more sense, they’d offer a more deluxe combo package of Syncopated Classic, a release wherein the group plays the lost work of ‘20s Seattle jazz musician, Frank D. Waldron. There are two ways to get the music: one can either buy the LP, which comes with a download code and a short biographical insert telling the story of how Waldron’s music came to be; or you can buy Frank D. Waldron: Seattle’s Syncopated Classic, which is a complete reproduction of the 1924 self-published book of compositions by the musician, along with photos and a more full biography of the man. It also has download codes for the album, as well as the original duo instrumentation, direct from the book itself.

In a perfect world, you get the book and the LP together in a fancy edition, but if one has the money, dropping $40 for everything is still worth the double purchase. Waldron was a musician and music teacher who instructed the likes of a young Quincy Jones back in the day, and rather notably copyrighted many of his own songs, even going so far as to self-publish the book of them, from which these tunes are taken. They come near to ragtime in a couple of parts — “The Kaiser’s Got the Blues” even sporting a 12-bar blues interpolation — but can also be rather lush, with two waltzes which float along, easily pastoral.

The 11 songs on the LP make a strong case in and of themselves for both Greg Ruby & The Rhythm Runners as a Seattle act worth looking at, as well as Waldron being a historical figure of note. However, even for those who can’t play a note, such as myself, the book offers up a as-complete-as-possible biography of a man about which not a whole lot is known, and it provides insight as to the kind of figure Waldron was. The music and biography together are a wonderful package, the likes of which you can lose yourself to quite quickly.

The St. Louis trio, Blind Idiot God, was the sort of band which always existed in a sort of duality. In musical terms, the only comparable act is likely D.C. hardcore band Bad Brains, simply in terms of the effortless way both acts could switch from frantic heavy music to laid-back reggae jams, and be equally adept at both.

This double LP reissue of Blind Idiot God’s sophomore album comes on gorgeous gold vinyl, with new cover art by Seldon Hunt, which is a massive improvement over the original, and it all looks rather impressive in the matte-finish gatefold jacket. The whole thing has been remastered, as well, and if that wasn’t enough, Undertow’s reissue comes with the first-ever official release of “Freaked,” their collaboration with Henry Rollins for the Alex Winter cult film of the same name (and the only song by the otherwise instrumental act to feature vocals). It’s both the version which plays over the movie’s opening titles and a longer version, heretofore unreleased at any point.

It’s quite a listen, jumping from opener “Sawtooth” and its namesake riffage, into the metronomic dub of “Clockwork.” You’ll go that way for the entirety of the first LP, with the second disc being devoted to the two versions of “Freaked,” as well as the album cut, “Purged Specimen,” which the band co-wrote and performed with alto saxophonist John Zorn. Undertow sees Blind Idiot God playing with sonic dynamics and tempos seemingly effortlessly, and the end result is a satisfying album with a rather excellent bonus for fans of cult cinema and heavy rock alike. 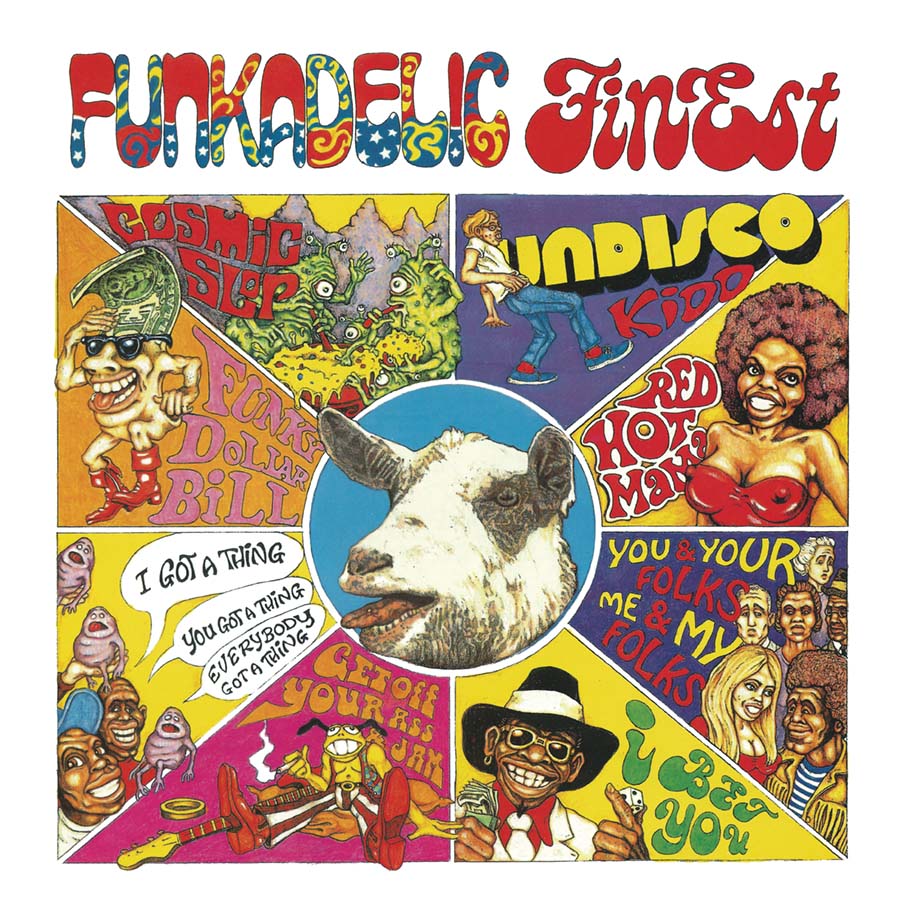 Originally released as a single LP collection by Westbound Records in 1997, the Funkadelic best-of, Finest, features all 15 cuts from the previous release, along with a live version of the psychedelic funk collective’s magnus opus, “Maggot Brain.” Taken from the band’s heyday of 1970-1976, these tracks contain everything you could possibly want, from laid-back opening cut, “I’ll Bet You,” to the impeccably groovy “Hit It and Quit It,” all the way through to “Cosmic Slop” — a cut Allmusic’s Ned Raggett described as “an even more mournful ‘Papa Was a Rollin’ Stone.’”

The whole thing was remastered from the original analogue tapes, and Finest does sound damned fine. Sequencing and time issues aside, it’s mostly in chronological order, allowing you to listen and trace the band’s ebb and flow, and changing dynamic. The Parliament side of the P-Funk equation seems to get a lot more credit for being the party band aspect of George Clinton’s massive and every-changing ensemble, thanks to cuts like “Flash Light” and “Up For the Down Stroke,” whereas Funkadelic has kind of gotten a rep for being the serious, rock-oriented aspect. This compilation, though, is just as likely to rock a party of Parliament’s greatest hits any day.

Maybe it’s the latter part of the party, where everyone’s a little faded and not particularly motivated to get up and shake that ass, but “I Got A Thing, You Got A Thing, Everybody’s Got A Thing” is just so head-noddlingly perfect, it’ll keep things rocking until the wee small hours. Plus, the sound on this compilation is flipping massive. Speaking of “I Got A Thing…,” the phased drums on Tidal Waves’ Finest reissue had me sitting in front of my speakers, frankly and pleasantly astonished. If you pick this up (and you should), I think you will be, too.

The packaging — two LPs in a single jacket with an obi strip — is a little bare-bones, but the pressing sounds amazing, and that badass cover art says more about the music than any liner notes ever could. 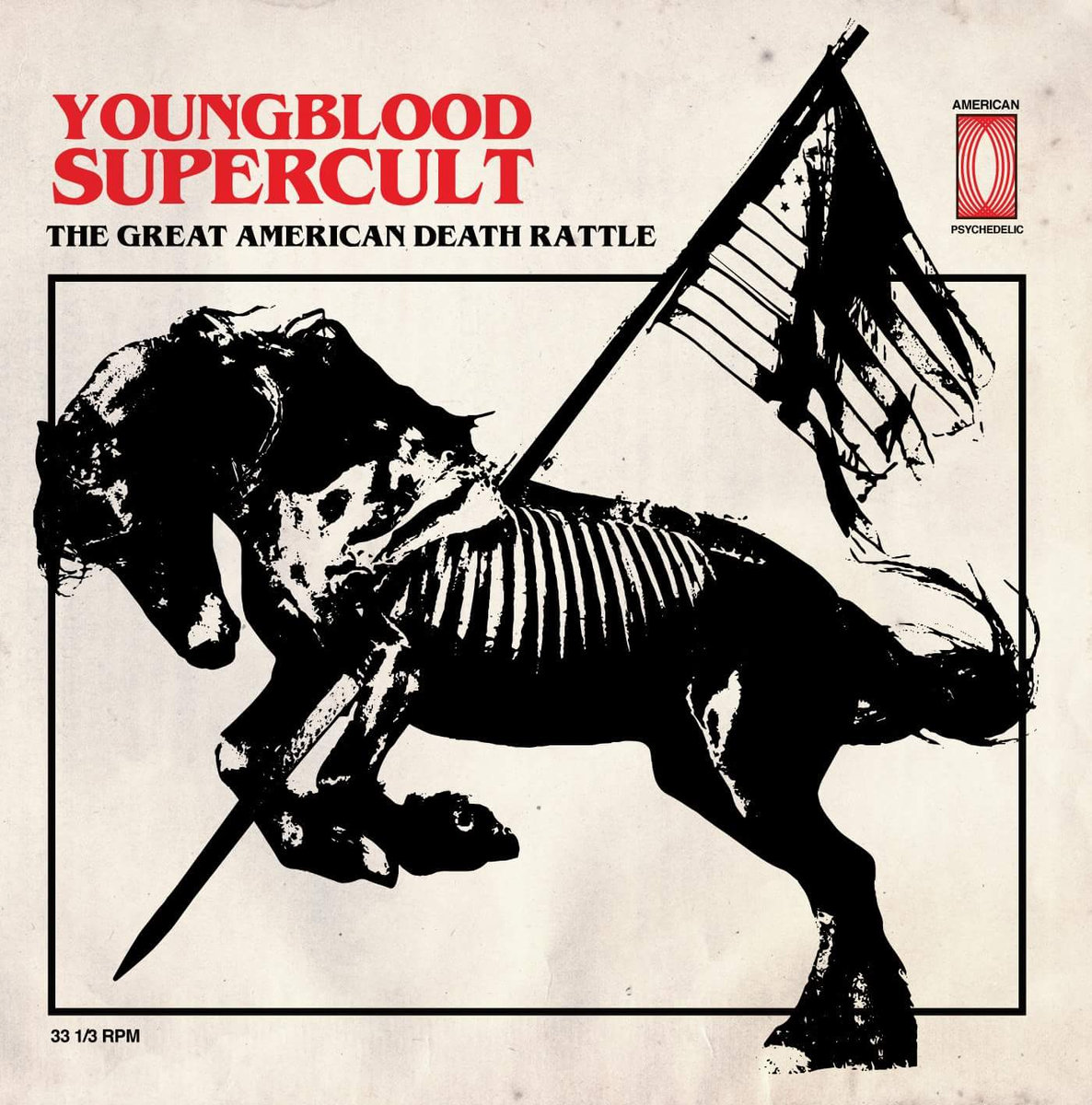 The Company, a heavy music label from Kansas City, has in the last two years established itself as one of the finest purveyors of slowed-down, riff-heavy rock and metal, and the third album from Youngblood Supercult, The Great American Death Rattle, continues that trend.

All of the different acts on the label have unique takes on what might variously be called stoner rock — be it doom, sludge, or otherwise — but the Topeka quartet stick to the classic elements of the genre, with bluesy chords and high, soaring vocals. The Great American Death Rattle is the kind of album you could put on the PA before an Eagles of Death Metal show or at a biker bar, and both venues would be equally appropriate.

The album has a slow burn and build, but by the third cut, “Draugr” — a reference to the undead creatures from Norse mythology — the band is willing to let things build and grow, with David Merrill’s vocals soaring and alternating with some excellent riff solos from guitarist Bailey Smith. The whole thing kicks into a ride halfway through, with Weston Alford’s drums and Brad Morris’ bass coming in to generate some rhythms that are almost motorik. It’s an excellent lead-in to the racing “Wormwood,” and from there, the album locks in and just goes.

The art direction of The Company’s Joshua Wilkinson continues to shine through, with a punk-inspired Xerox’d look to the imagery, plus tight iconography and a cleverly-placed “American Psychedelic” genre tag on the front corner of the jacket. The copy of the LP we received is on “God’s Breath” transparent red, tying in nicely with the band’s logo on the front, as well as the Statue of Liberty under construction on the back. There’s also a great lyric sheet, with equally appropriate and creepy images for each song. The label’s also very cool about throwing in a massive handful of stickers with every release, so you can rep the hell out of both band and company with ease.

The Great American Death Rattle is the sort of album that makes you want to grow your hair out, start smoking bales of weed, and maybe starting a band of your own. Even if none of that manages to come to fruition, it makes a damn fine soundtrack to barrelling down the highway or air-guitaring the living hell out of your living room, whatever your speed might be. 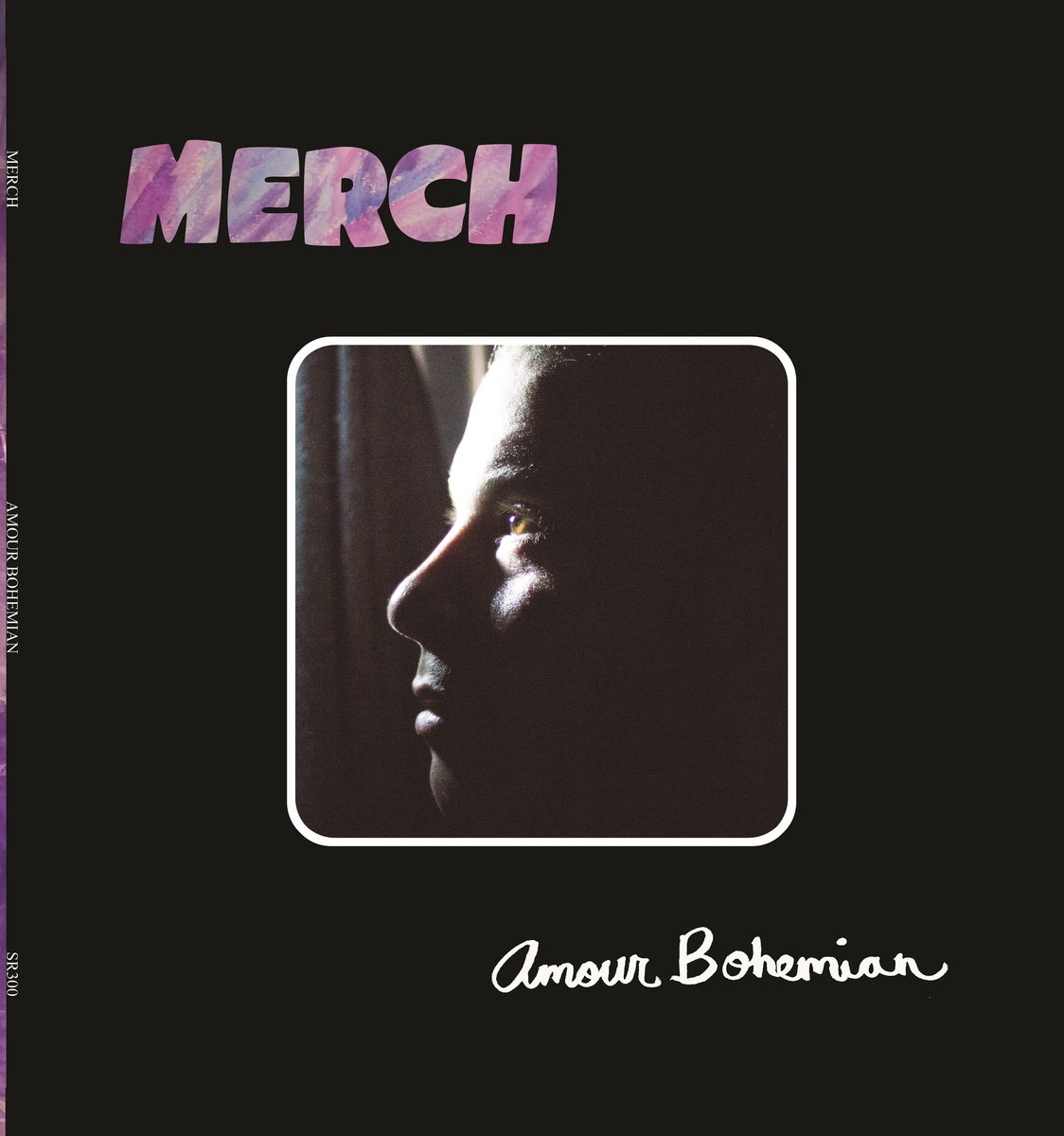 “At final count, around 65 people had their hands into bringing this music to you. That number includes the Prague FILMHarmonic Orchestra, a full Latin jazz band, a few opera singers, and some of the finest psychedelic, garage, and jazz players out of Los Angeles and San Francisco.”

Joe Medina, the man behind Merch, makes beautifully weird outsider music, and from the get-go, Amour Bohemian is an attempt by the musician to create an album which is, at its heart, a love letter to “the old-school crooners, Mexican ranchero, French chanson and ’30s big-band jazz.”

The album plays like the lost soundtrack to a strange late ‘60s art film, with songs like album opener, “Don’t Wait Too Long,” that manage to simultaneously pull you in with hooks and luxuriant melodies, while also challenging the listener with abrupt guitar chords. That sense of counterpoint might be the hallmark of Amour Bohemian,

Be it Medina’s slightly melancholic voice contrasted by the operatic vocals of Acacia Newton and Josh Garcia, or the differentiation between the FILMHarmonic Orchestra and Medina’s guitar on “Two Hearts,” which draws you in and keeps you closely listening, you will repeatedly find yourself drifting along, only to have something which perks your ears up and has you attentively marking the unique qualities of Merch’s music. It’s kind of a more avante — or, if you will, bohemian — version of Daniele Luppi and Danger Mouse’s Rome album from 2011.

The packaging has a very ‘60s cover, although the back cover and liner notes don’t necessarily follow through with that design. It’s Times New Roman all the way, as far as typefaces (although the tracklisting is handwritten and fits in nicely). The pictures look straight out of a big band pop album from the ‘50s — like something which might have been shot while Nelson Riddle and his orchestra were backing Frank Sinatra or something. The 180-gram pressing sounds amazing. Amour Bohemian is a sumptuous listen with surprises around every musical corner. 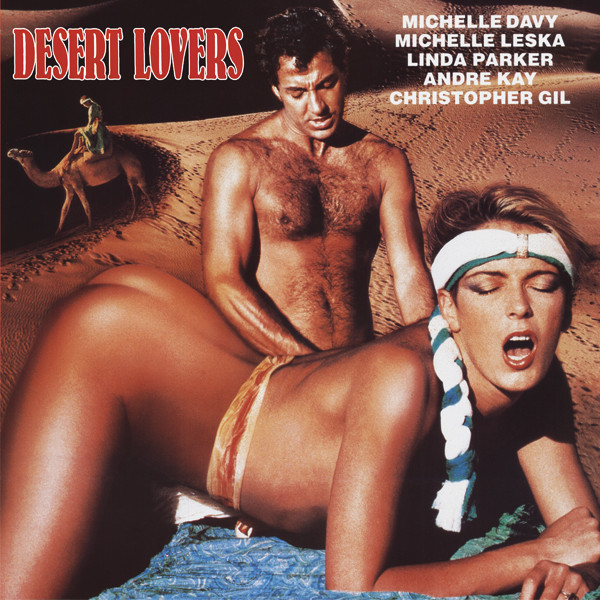 The duo of the Wassermanns are the pair better known as the German electronic act, Schaltkreis Wassermann, whose 1982 Psychotron is a pretty excellent bit of early electronic dance-pop. One would think that a successful dance act wouldn’t record the score to a pornographic film, but considering that making the hips move is the entire point of both things, it kind of makes sense.

“Jeep Race” is a bit of a basic, Krautrock-style Kraftwerk knock-off, but otherwise, the score for Desert Lovers takes quite a bit from the Middle Eastern setting for the film, using the stereotypical “snake charmer” melody as the basic for much of the music, sinuously weaving it in and out of insistent synth riffs and electronic doumbek sounds. It’s really hypnotic. The “Desert Lovers Theme” — especially the instrumental version — sounds astonishingly like Angelo Badalamenti’s Twin Peaks theme, “Falling,” recorded four years later. Prescient stuff.