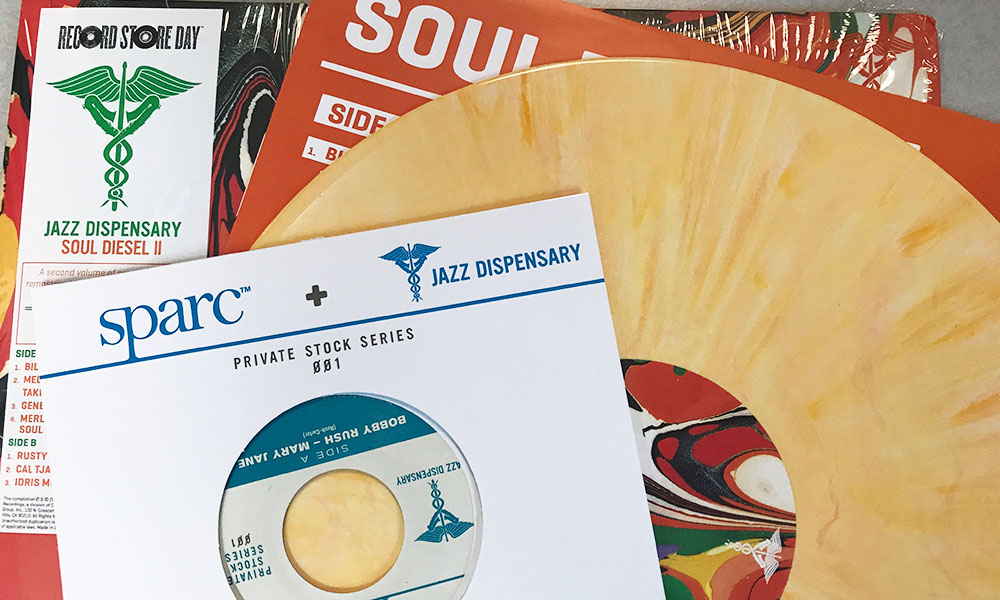 Some ideas make too much sense not to explore, like combining a record label named Jazz Dispensary with an actual cannabis dispensary chain in California. This 7” release promises to be the first in their “Private Stock” series, showcasing two of the marijuana-themed tracks from the Jazz Dispensary back catalog: Rusty Bryant’s amazing “Fire Eater” and the soul-funk classic “Mary Jane” by Bobby Rush.

The packaging itself is basic, almost clinical, which might be the whole point. On the back of the sleeve, you’ll find addresses for each of the Sparc dispensaries, as well as info about both of the tracks featured on the comp. The vinyl is a gorgeous translucent blue and thankfully doesn’t follow the current trend of scented records like last year’s Peter Tosh Legalize It.

Private Stock Series 001 was released on 4/20 at Sparc dispensaries in California and is limited to 500 copies.

When Jazz Dispensary sets out to make a comp, you can guarantee it’ll be great. With a long awaited sequel to 2016’s Soul Diesel, Soul Diesel II picks up exactly where the other left off, with seering funk grooves, sample-ready drum breaks, and enough deep cuts to put record collectors on the hunt for the source of each single.

While I love the whole album, there are a few standout cuts that deserve recognition. One of the deepest pulls is Cal Tjader’s vibraphone workout “Mamblues,” taken from the soundtrack to 1972’s Fritz the Cat. It’s a hectic and fast-paced track, featuring legendary drummer Bernard Purdie and session bassist Chuck Rainey supporting Tjader on the vibes, creating a tight three minutes of pure jazz-funk bliss.

Another standout is album opener “The Twang Thing” by guitarist Billy Butler. Known more as a sideman than solo artist, the track features Butler leaning into a Meters-esque groove that keeps giving to the end, pushed along by some incredible sax playing by Houston Person.

The striking album art was created for Jazz Dispensary by renowned psychedelic artist Danielle Garza, featuring swirling colors throughout the front and back covers. The vinyl itself is an opaque orange swirl, which can look more orange or peach in different lights. Fidelity wise, the album plays flawlessly and no surface noise was detected.